Today, the Dbacks would go for the series win over the Rockies. Patrick Corbin would be on the mound for the Snakes, and former Snake Jon Garland for Colorado. Who would win out? Read on to find out! Or just look at the headline...

The first inning wasn't the most shining inning Corbin's ever thrown. Eric Young Jr. lead things off with a double, which would be his first of three today. A strike out of Fowler followed immediately after, and a nifty play by Pennington threw out Young at third on a ground ball by Troy Tulowitzki, for the second out of the inning, with Tulowitzki reaching at first. Rosario then moved him over with a single of his own.

Bring on the circus music please! Thank you.

Michael Cuddyer hit a 3-2 pitch into left field for a base hit. Rockies third base coach, Stu Cole, sent Tulowitzki around third where he was promptly thrown out by the KUBLE CANNON by about twenty feet. Tulo went for the collision anyway, but he was out, and inning was over with no damage done. Or was there...

The Dbacks half of the first was completely uneventful. Two ground balls to short and a strike out to Jason Kubel ended it pretty quickly. The second looked a bit better with Montero and Chavez singles, but a Josh Wilson ground ball to second with runners at first and third ended the threat as well as that inning.

We had more circus music in the third. After a Garland bunt out to Corbin, Young got his second double. And then decided he was going to try and steal third on a pick off attempt. It's as bad as it sounded. Dexter Fowler just couldn't think of anything he could do to top that, so he just grounded out to short to end the inning.

At this point, Tulowitzki was taken out of the game and replaced by Johnathan Herrara. Official word from the Rockies twitter account is that he has a left shoulder strain, is day-to-day, and will be reevaluated after the game. Now back to the game.

The inning started off with single from Cliff Pennington, because he thrives off your mocking. Corbin bunted him over to second for the first out, and Parra got him to third with a single. Ross was helpful in the sense that he moved Parra into scoring position, but yet he and his beady eyes failed to get on base. Kubel comes to the plate.

Now, since I know you didn't put calliope away yet, why don't you crank it up again. Got it going? Good.

During the course of Kubel's at bat, two runs score. Pennington scores on a passed ball on Wilin Rosario. 1-0 Dbacks. Then, same at bat, mind you, Parra scores on a wild pitch that barely goes ten feet away from the plate, all because Rosario tried to apply the tag himself, rather than flip the ball to Garland, who it looked to me, would have gotten an easy out. Kubel strikes out, but not before the Dbacks take a two nothing lead.

In the next two innings, the Diamondbacks would score another two runs on aJosh Wilson RBI double Cody Ross RBI single, which was good, because they would need them. In the sixth, the Rockies would pull a little closer on an RBI double from Fowler, and a wild pitch would score Fowler from third two batters later.

After that, it really was a quiet game for both teams, until the top of the ninth when J.J. Putz was brought on for the save. He would eventually allow runners on second and third, two outs for Carlos Gonzalez. In the end, though, the Rockies resistance was proved futile when CarGo would strike out. Game and, also, a tie for first! 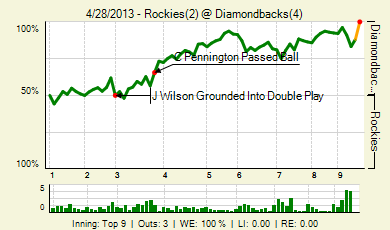 COTD has to go to ZM for his comment about the Rockies baserunning:

To provide angry Diamondback fans with some much-needed perspective on how bad baserunning can get.

6:40 PM game time tomorrow here at Chase against the Giants. Be there!