Diamondbacks Thing of the Week: Didimabilia

A scary moment for both Gregorius and Diamondback fans last night, as Didi was hit in the head by a pitch. The good news is, he walked off the field under his own steam, and tests looked good. He'll still likely take a day or two at least. In the meantime, why not get ahead of the curve and buy some Didi souvenirs now, before the rush?

Share All sharing options for: Diamondbacks Thing of the Week: Didimabilia

Obviously, he still has played only 15 games in the majors, so there's not an enormous amount of stuff. Ebay shows a total of 215 active listings, but the vast majority are simply trading cards. I don't really regard those as memorabilia in the true sense, since they are mass-produced, usually with little or no direct connection to the player in question. Sure, you can get the player to autograph them, but it's still just a bit of cardboard with a picture on it. No offense to any trading-card collectors out there (including Diamondbacks owner, Ken Kendrick), but I'm just not interested. So, crossing those off, what do we have left? The first thing to jump out was obvious...

Sure that the Spelling Stasi will be having a good chuckle there. But after last night, there's a certain melancholic irony is also at play, particularly when reading the sentence in the description, "It's a Rawlings size 7 3/8 shows use and is in excellent uncracked condition." Well, that would make sense, since last night was the first time Gregorius had been hit by a pitch, anywhere, in his major-league career. Even in the minors, he had only four plunkings since 2010, in over 950 plate appearances, so Carlos Quentin he ain't. Of course, it's a Reds' helmet, so probably of less interest to Arizona fans, especially at the opening bid of $395.

<>Cram those keywords in there! Make them BIGGER! Add exclamation points! Hopefully, the buyer will then not notice the small print in the description: "The bat is game used by unknown player." Ah. So the usage of the term, "Didi Gre..." - hang on - "DIDI GREGORIUS GAME USED BAT" in the subject line isn't entirely accurate. Signed by Didi, but not actually used by him. As long as you're aware of that, I suppose it's okay, and $64.99 isn't too bad: I also note it's not the only such pseudo-game used bat, and the other one is fifteen bucks cheaper. Still, probably be more inclined to wait for the next Diamondbacks Yard Sale. 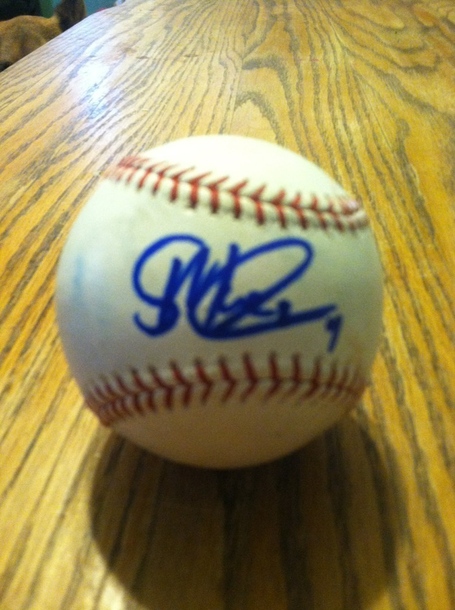 There are a few signed balls around - half a dozen are currently listed on Ebay, with prices going all the way up to $60. I like this one, partly because it's the cheapest ($21.49 opening bid), and partly because of the apparent local connection, just a few miles down the road from SnakePit Towers to the Reds' Cactus League facility. "Didi Gregorius signed this game used Rawlings Major League Baseball in 2012 spring training in Goodyear AZ. The ball is a game used ball from spring training." Would like a bit more info on exactly how it was used in spring training, but considering the price, you can't have too many complaints.

Ok, I'll bend my self-imposed rule about generally excluding trading cards, simply because at $4.50 plus $1.50 shipping, you'd be hard-pushed to find a cheaper autograph: you'd likely spend more on gas driving to and from Chase Field to get one in person. Which would also be worse for the environment, so you're saving the Amazonian dolphins (or something) by purchasing it online. Bidding in this is still going on, and ends tomorrow - but given there's another auction for the same card, with three hours left at time of writing, that has a total price of $6.11, I'm really not expecting the price to go through the roof.