The game starts out pretty well for the Dbacks as Brandon Crawford makes a throwing error and Gerardo Parra arrives at first safely. I don't what it is, but Brandon Crawford just can't field worth a lick when he plays against us. The game continues on as Martin Prado hits a single to right field. Goldschmidt comes up to bat and hits a double that scores Parra. Miguel Monetero grounds out to short but manages to move all the runners over and Martin Prado scores. Cody Ross and Eric Chaves make a quick couple of outs. The game gets quiet until the 3rd as Parra strikes out swinging to begin the inning and Prado walks. Then Goldy saunters to the plate and as usual sees a man dressed in Orange and Black and thinks to himself, "I must destroy this man" and hits a 3-1 pitch all the way to Pyongyang for a 2 Run homerun. Montero and Ross make two quick outs and our half of the inning is over. The game quiets down once again until the bottom of the 8th. Andres "I have a movie" Torres leads off the bottom half of the 8th with a single. Brandon Crawford continues to play way over his head and hits a triple to center field. Hector Sanchez grounds out to third but Crawford manages to score to make it 4-2, still in favor of the Dbacks. Angel Pagan hits a single and David Hernandez comes in to relieve a tired Patrick Corbin who up until this point was embarrassing The Giants. Hernandez induces a quick fly out from Scutaro, but then gives up a single to Pablo Sandoval to put runners on the corner. However this threat ends when Buster Posey pops out softly to second base. The Dbacks go down 1-2-3 in the top of the 9th which brings J.J. Putz in to get the save in the bottom of the ninth. The Giants thought differently as Hunter Pence leads of with a double and Brandon Belt hits a 2 run home run to tie the game at the very last second. Putz manages to settle down and gets 3 outs to end the inning. Not much happens in the tenth inning but the eleventh is plenty of fun as Didi Gregorious hits a 1 out double and Alfredo Marte reaches base on a missed catch error by Brandon Belt. Gregorious comes into score the go ahead run when Santiago Castilla throws a wild pitch. Parra then doubles which scores Marte and gives us an insurance run. Parra then decides to channel Willy Bloomquist and gets thrown out on a bad attempt at stealing 3rd. Prado pops up to end the top of the 11th. Matt Reynolds comes in for the save and gives up a single to Belt but induces a double play in the next at bat. Reynolds gets Crawford to ground out to second base to end the game. 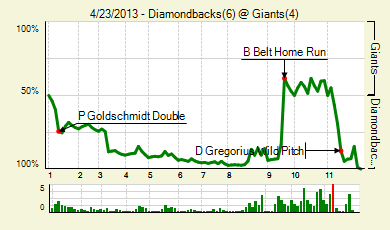