David Hernandez allowed a two-run game-tying homer in the eighth inning, and the Giants walked the Diamondbacks off in the ninth, as Arizona's series of close road losses continued.

The game started with semi-matching innings for each team. The Diamondbacks scored two runs on three hits in the first, but the Giants responded by doing exactly the same in the bottom half of the inning. The main difference was that all of the home team hits were doubles, taking advantage of the open spaces at AT&T Park, going back-to-back-to-back off Wade Miley with one out. Meanwhile, Arizona loaded the bases with no outs, on singles by Gerardo Parra and Martin Prado, followed by a Paul Goldschmidt walk. Miguel Montero struck out, but Cody Ross brought two in with bloop that floated impeccably over the shortstop, scoring two.

After their respective wobbly first innings, both Miley and the Giants' Ryan Vogelsong settled down. Miley's 25-pitch opening frame was concerning, but he took only twenty-six to get through the second, third and fourth, retiring eleven San Francisco hitters in order, beginning with the second out in the opening inning. However, Vogelsong was almost as effective, with another walk to Goldschmidt the only base-runner he allowed over the same period, which took us into the fifth inning.

That opened with Wade Miley at the plate, and we weren't expecting much. If you can tell me you called his first home-run, I reckon you're a liar. But that's exactly what happened, as a 2-0 fastball from Vogelsong carved through the San Franciso night air, into the right-center seats - a few more feet and it might even have been a splash-down homer into McCovey Cove. That was not just the first home-run by a Diamondbacks pitcher since Daniel Hudson in July 2011 - off none other that Ted Lilly! - it was the first hit of any kind by our hurlers, breaking an 0-for-37 slump that goes back to September last year.

The Diamondbacks escaped a jam in the bottom half, after Anders Torres singled to lead off. Miley had him picked off, but Goldschmidt's throw down to second hit the runner in the back, and it was charitably assessed as a stolen-base. A groundout then advanced the runner to third with one out, but Miley struck out his opposite number, and then got the leadoff hitter to fly harmlessly to left, preserving the lead. Eric Chavez then doubled it, with a home-run to left-field which looked, off the bat, like it might be a double into the gap at best. But it kept on going, and just made it over the fence into the bleachers, making the score 4-2.

The Giants got their leadoff man again in the sixth, but he was left on first again, though it took a couple of good plays to do so. Firstly, Miley took advantage of the Obese Raccoon's free-swinging nature (and, man, he's looking fatter than ever - when Didi reached first, I'm sure I saw Sandoval looking across the diamond and licking his lips), to strike him out with a ball in the dirt. And a fly-ball down the right-field line by St. Buster required a full-length sprawl from Ross to make the grab, the ball just sticking in the heel of his glove on what could well have been an RBI double otherwise.

Let's pause and talk about what was not or isn't working First, Cliff Pennington at the plate looked all but completely lost, though singled in the ninth. He went 1-for-4 with two strikeouts and a double-play tonight, upping his average to .203. The only thing making it palatable, is that it's still 44 points better than Chris Young is hitting for Oakland (.159). Miguel Montero's struggles also continued, though he singled in the eighth to end a 1-foe-20 streak. And our base-running remains horrible. Parra was thrown out by a country-mile trying to steal second in the seventh, meaning we have now been caught as many times as we've been successful - and we only have five successes.

Back to the game in progress. Miley was finally lifted after putting two on with two outs in the seventh: he'd thrown 90 pitches, but Kirk Gibson was clearly keen on not taking any chances, opting to turn to Brad Ziegler with the tying run on base. One pitch, one ground-ball and one out later, Ziegler's night was over, leaving Miley with a line of 6.2 innings, seven hits, two earned runs and seven K's. The record for one-pitch outings by a Diamondback in a season is four: Brad has had three one-pitch outings since last Sunday, which seems like a terrible waste of his talents. But David Hernandez is the eighth inning guy and that means he will be used when we lead in the eighth.

And that means, tonight, Hernandez will also give up a single to the Racoon, followed by a two-run, game tying homer to St. Buster. Game tied. Somehow, what followed, appeared inevitable. The Diamondbacks briefly threatened in the ninth, with Pennington's double putting a runner in scoring position. But Eric Hinske grounded weakly out on the first pitch. The Giants, on the other hand, executed perfectly against Tony Sipp in the bottom of the ninth. Lead-off single. Bunt him over. Single. Walk-off win.

Eighth consecutive loss for Arizona by two runs or less, but you don't get anything in the standings for keeping it close. Parra had two hits at the top of the order, and Goldschmidt reached safely three times, on our only two walks of the night and a hit by pitch. For some perspective though, even after allowing three runs in 1.2 innings tonight, our bullpen ERA for the season is still 2.47. 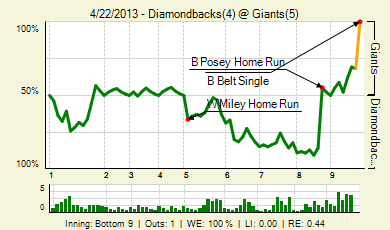 Most rec'd comment was lozenge's posting of the Obese Racoon + cake GIF, but those are ineligible for Comment of the Night, so we go with Clefo

BUT WHAT DOES BOO RADLEY THINK?

We'll be back tomorrow, with Patrick Corbin facing Matt Cain, and the Diamondbacks need to win to stay above the .500 mark.