The Diamondbacks left it late, but scored two runs in the ninth inning, and held on to avoid the sweep at Coors, instead inflicting the Rockies first home defeat. We should have known, really: Arizona are now 6-0 in series finales this year.

Yes, this is one of those recaps that's more or less been rewritten. The first draft, running through the seventh inning, was another scathing indictment of Arizona's offensive weakness on this road trip, scoring only two runs as they were swept out of Colorado. However, facing a two-run deficit in the eighth, they did what they seem to have done all series - make things interesting, late. A Paul Goldschmidt walk got things started, and he advanced to second on a Miguel Montero ground-out, then came home after Cody Ross cranked one off the outfield wall, over the head of the Rockies right fielder. One-run game.

Didi Gregorius then lead off the ninth, with a single back up the middle. The Colorado defense was thinking bunt, and playing in, which was fortunate for us, as A.J. Pollock chopped the ball hard down, and it bounced elegantly over the head and outstretched arm of the home third-baseman for the squibbiest of doubles. Alfredo Marte grounded out, but the running on contact play that had failed earlier, worked this time, and Gregorius scurried home, tying the game up, with Pollock also advancing. Gerardo Parra then swung at the first pitch, but got good wood, driving the ball to the warning tag, and Pollock came home with the go-ahead run.

Of course, what one-run lead at Coors in the ninth doesn't have a little excitement? Having blown a one-run lead in Yankee Stadium, J.J. Putz was sent in to try and close things out. With one down, he walked Dexter Fowler who, fortunately, wasn't as speedy as I remember him being. With one out still to get, a successful hit and run put runners on the corners, and Eric Young Jr. at the plate, on the day his father was honored with a bobblehead at Coors Field. However, there would be no bobble for the son, as he grounded gently back to Putz, who flipped to Goldschmidt for the last out

Rewinding a bit, Brandoin McCarthy seemed to have a better start than previous, and given the environment, that has to be considered a hopeful sign. He did give up a couple of deep fly-balls in the early going, but almost all the damage was in the third inning, when the Rockies poked, prodded and blooped their way to three runs on four hits, none of them for extra bases. They were helped by a couple of throws home from Arizona outfielders, which allowed the trail runner to take second on the play - and then score on the subsequent hits, as McCarthy was BABIP'd to death. The long home-run allowed to Tulowitzki in the sixth inning, however? That was all Brandon.

In general though, it seemed like an outing on which he can build. The swinging strikes still weren't there - I think he had only five all afternoon - but there didn't seem to be the same number of hard-hit balls here. He was also more economical, averaging 16 pitches per inning, a lot better than the 25.5 figure posted in New York. The final numbers still weren't great - four runs on eight hits and no walks in six innings - and the low strikeouts are concerning, with just two this afternoon. But overall, the Game Score of 42 was the best McCarthy has had all season, and I'll settle for baby steps at the moment, especially since we won in the end.

The offense showed a lot of patience against the Rockies starter, but precious little else. Through four innings, we had got his pitch-count up until the mid-eighties - but he was still enjoying a no-hitter. Enter Gregorius, who cares not for your no-hitter. Or your shutout, either, for our "no-hit" shortstop deposited the second pitch he saw into the bleachers. He's now hitting .545/.583/1.182 in his first three games, which has got to be closing in on Trent Oeltjen for the best start to a Diamondbacks career.

We could perhaps have done better. Pollock followed up with a single, but McCarthy couldn't get the bunt down, and struck out. That meant Parra's double only advanced Pollock to third, and he was then caught in a rundown when Martin Prado grounded out. A Goldschmidt single (SnakeLines count: 2) did score Parra, but the two runs we ended up scoring, felt a bit underwhelming. Still, it proved enough. For the day as a whole, Goldzilla reached base three times, also drawing a pair of walks, with Gregorius and Pollock repeating that, both men getting two hits and a base on balls. We made the Rockies work: they threw 170 pitches in nine innings, compared to our 136.

A quick spot of praise to the bullpen, in the shape of Matt Reynolds,. Heath Bell and Putz, who added three scoreless innings, and critical those turned out to be. Bell struck out two in a hitless eighth, though one of those reached on a wild pitch. It's worth noting that, since the infernal abomination which was his debut, Heath has allowed one run in seven appearances, with 12 strikeouts and no walks in 6.2 innings. He has allowed eight hits, but a BABIP of .over .500 is likely the main cause there. The next time he comes into the game, my previous feelings of abject horror will likely be no more than "slight to moderate concern." 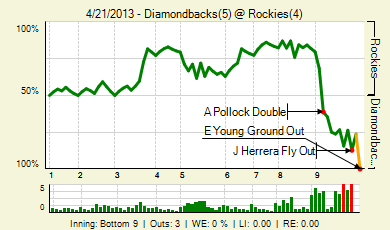 Clefo had exactly as many comments as soco and onedotfive, who were second and third, combined. Also taking part: AJV19, AzDbackfanInDc, AzRattler, Baseballdad, DbackCardsFan, GuruB, Jim McLennan, John Baragona, Majabe, Marc Fournier, PR151, Paper Clip, RobbieFVK, Rockies7935, The so-called Beautiful, TolkienBard, Zavada's Moustache, asteroid, benhat, dbacks79, feldz, hotclaws, luckycc, prwhitaker1 and txzona. I was going to avoid Comment of the Day to one of the more negative comments from the early innings, giving up on the game - fortunately, the Diamondbacks didn't! But instead, asteroid gets it for this, immediately before Didi's home-run.

If their pitcher gets a no-hitter I will be very cranky.

(Is that enough of a jinx?)

Why, yes: apparently it is! We'll reconvene tomorrow night, as the road-trip swings on to the Bay Area, for our first encounter with the W*rld Ch*mp**n San Francisco Giants.