Diamondbacks 3, Rockies 4: Arizona Prove To Be The Dopes

I'm on the recap tonight, since Clefo is participating in another vintage baseball tourney. It's not much stretch to claim that his team probably played better than the D-backs today, especially early on. Kirk Gibson and Cody Ross were ejected, though we did show some late spirit.

Share All sharing options for: Diamondbacks 3, Rockies 4: Arizona Prove To Be The Dopes

The Rockies got on the board on the second, and was the result of just the first bit of Arizona incompetence this afternoon. After a walk, Cahill allowed a double, but the runner was caught in a run-down between third and home. However, after Martin Prado threw the ball to Wil Nieves, Nieves managed to throw the ball past Prado, and the runner scurried safely home. The error was charged to Prado, but on viewing the replay, I think it more likely belongs to Nieves. Worse was to follow in the third, as a lead-off triple was followed by a hit batter and a stolen-base, both men coming round to score on a couple of productive outs.

Meanwhile, Arizona's offense was as bad as we feared, looking at a line-up that appeared to feature the biggest collection of black holes since Hawkinspalooza '05. And when the Diamondbacks batters did manage to get any hits, they immediately TOOTBLAN'd themeselves out of the equation. A.J. Pollock singled, and was caught stealing second. The very next batter, Prado, also singled and was out, by a wide margin, on a very ill-advised attempt to tag up and advance on a fly-ball off the bat of Goldschmidt. Nieves walked with one out in the fifth, and Josh Wilson hit into a double-play. In his six innings, Jorge de la Rosa had faced one batter over the minimum.

Things exploded in the seventh. Prado had a "discussion" with the umpire when he was called out on strikes to lead things off, and after Cody Ross struck out to end things, he flipped his helmet and bat back to the dugout, without apparent intent on his part. For some reason, not currently clear, home-plate umpire Chad Fairchild saw fit to toss Ross, and when Kirk Gibson came out to argue, he also found himself taking an early bath. Cue Nick Piecoro's Tweet., which suggests that the next couple of games are going to be a good test of the team's resolve.

Prado's baserunning mistake looked like someone trying too hard to make something happen. Now these guys just look frustrated and angry.

Cahill had an up and down kinda outing. He managed to escape after Alfredo Marte botched a fly-ball into a leadoff double to open the bottom of the fourth, but allowed a solo home-run to Michael Cuddyer in the sixth. He got through seven innings, and allowed three earned runs on six hits, three walks and a hit batter. It was more wobbly than dominating, but a quality start is a quality start in Coors Field, and he wasn't helped by the defense behind him. Still, it dropped Cahill's record to 0-3, even if this loss was far more on the offense.

The Diamondbacks managed to get on the board in the eighth, thereby avoiding the ignominious feat of letting the Rockies have their first consecutive games at Coors allowing zero earned runs since 2006 [dammit, if I'm going to look up those stats, I'm going to use them!]. Wil Nieves singled, and Eric Chavez homered to right field, his first with Arizona and our second pinch-hit blast of the season. Considering we had only three such shots all year in 2013, that side of things appears to be working fairly well so far.

We made things even more interesting in the ninth. Leading off, A.J. Pollock doubled to the outfield wall, and after a Prado ground-out, Paul Goldschmidt got his first hit of the series (SnakeLines count: 1), to put the tying run on base with one out. Geraldo Parra had a good at-bat, working himself a walk, which pushed Goldschmidt into scoring position and loaded the bases. We sent up pinch-hitter Miguel Montero, who also worked hard, in an eight-pitch at-bat, but it ended with a ground-ball to first, scoring a run and advancing everyone. Fellow catcher Wil Nieves followed, but lifted the first pitch to right-field, and the tying run was left stranded at third base.

Pollock had two hits, and Prado reached safely twice, on a hit and a walk, but this was a case of too little, too late, for the offense - they basically gave the Rockies seven innings head-start in the scoring stakes. We didn't have a single at-bat with a runner in scoring position until the ninth inning tonight, which is a little bit late to start putting things together. Three of tonight's starting line-up now boast batting average at or below the Uecker Line: Alfredo Marte is at .185, while Cliff Pennington and Josh Wilson are both hitting .200. Speaking of which, one wonders why we didn't use left-hander Didi Gregorius instead of Nieves for the last out in the ninth? Nothing to lose at that point, I'd say. 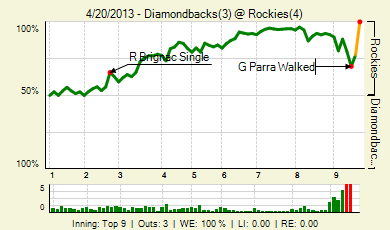 The Gameday Thread pretty much died a death in the second-half, so credit to those who stuck it out to the bitter end and were rewarded with...well, some excitement, if not a victory. It's perhaps significant that no-one reached 30 comments. AJV19 led the way, ahead of Zavada's Moustache and Rockkstarr12. Also taking part tonight: AzDbackfanInDc, Baseballdad, Britback, Incomplete Translation, Jake6233, Jim McLennan, RobbieFVK, The so-called Beautiful, TolkienBard, asteroid, azshadowwalker, blank_38, coldblueAZ, dbacks79, hotclaws, onedotfive, porty99, prwhitaker1, shoewizard and txzona.

Rod Barajas could have done that

We'll reconvene tomorrow for the series finale, as we try to salvage that one, behind Brandon McCarthy, who will try to find his feet in Coors Field. Yeah, not exactly the place pitchers normally go to restore confidence. First pitch is a little after 1pm, so we'll see you for that.,