Want to show your Arizona fandom, but are on a very limited budget? Welcome to this week's edition, which is just for you.

Share All sharing options for: Diamondbacks Thing(s) of the Week: Cheapskate Edition

You can find some real bargains on eBay, if you look. We honor that this week, by bringing you the five cheapest pieces of Dbacksmabilia to be found in active auctions on the site. We've limited it to one of each kind of thing, because otherwise the list would be dominated by trading cards. Also, prices are the current high or opening bids for the items, and may not necessarily reflect the final selling price. However, they do all offer free shipping.

2013 Arizona Diamondbacks pocket schedule
"Keep up with Gibby and the boys!! This should be a fun summer!! Typical of most pocket schedules, features include seating chart for Chase Field, ticket pricing and promotional schedule for special events and give-aways." So, this would be the one given away to everyone on Opening Day, right? Never quite figured out the appeal of these: if I want to know when the D-backs are playing, that's why Al Gore invented the Internet, right? Well, that and LOLcats, anyway. Though while browsing, I did find this 1909 Tigers pocket schedule, for $794 more, which also appears to include an early, manual version of the MLB At-bat application....

Post Card 'Arial of Phoenix' Downtown with Diamondback Stadium Post Card New
Just in case you find yourself uncertain of what city the Diamondbacks play in, here's a handy aide-memoire, suitable for hanging behind your desk or in the den. Two things come to mind immediately when looking at the picture (below). One: man, downtown Phoenix has almost now distinguishing features. Two: where is the Diamondbacks' stadium I was promised? Because what I am looking at here, appears be US Airways Center a land where the hand of baseball has never set foot. You'd think a seller located in Chandler would be aware of the difference. So, let the buyer beware... 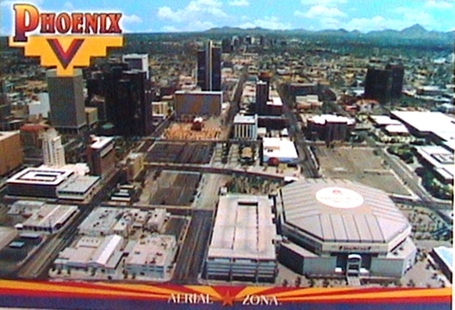 2013 Topps Baseball Card #61 Trevor Bauer Pitcher Diamondbacks
Whoops.jpg. Of course, baseball card companies do not necessarily know where players are going to be for the upcoming season, leading to situations like this. Still, regardless of the velocity at which Bauer found himself shipped out of town, six cents (and free shipping, remember!) seems rather cheap, though I do see that there is apparently an intense bidding war going on for this, the price having gone up by 500% from the opening bid of a shiny penny. Oh, how the mighty are fallen... And speaking of pennies brings us to the cheapest Diamondbacks things money can buy.

**Mlb-New- Vintage Arizona Diamondbacks Velcro Hat With Tag**
"This is a nice hat," says the seller, apparently sparing all enthusiasm and sales invective, and preferring the sneak/stealth approach to selling his products.Though actually, yes, it's not bad - though at the current price, I'm hard pushed to think of a not-nice hat. Except a Giants one, of course: I'd rather wear a dog turd with a visor on my head. I'll let you absorb that image for a bit. Still, I find all my caps magically disappear, probably to the Land of Lost Socks, whenever I am about to venture out into the sunshine and need to wear one. So I tend to the view that you can never have too many of them. Like pens, the cheaper the better.

Lot of (10) Arizona Diamondbacks MLB Vinyl Decal Stickers 4" for cars+laptops+++
On first sight., the snake "D" logo on the decals here looked a little different from the official one, somehow seeming more pissed-off. On closer inspection, it appears to be the same design, but they've switched up the colors: what was black is now red, and what was cream is now black. Not sure if this was an attempt to avoid an MLB trademark infringement, but it seems kinda flaky, and not really likely to work. The resulting sun-burned rattlesnake (which I guess would explain the anger) is not exactly part of fandom canon, though I guess it gets the basic idea across. Hey, what do you expect for 1/10 cent a pop? 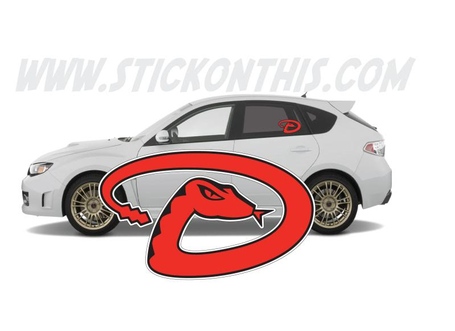