Last year, the Diamondbacks went 17-40 when they didn't hit a home-run. Tonight, they didn't either, but that didn't stop them, after an early hiccup or two, from producing a solid overall performance: Ian Kennedy out-pitched Adam Wainwright, and Gerardo Parra had a four-hit night.

Share All sharing options for: Diamondbacks 6, Cardinals 2: Hello, baseball. How I've missed you!

Going by the first, it seemed the "Diamondback way" of 2013 was disturbingly close to the unsuccessful one of last season. Kennedy got a K to start the season at Chase, but then gave up back-to-back doubles. The second was the result of falling behind Matt Holliday, and the resulting fastball - which at this time last season, would have no doubt been called "center-cut, right down Broadway" - went into the left-center gap. Meanwhile, our half was highlighted by a Gerardo Parra leadoff double, and after Martin Prado gave himself up to move the runner over, Aaron Hill grounded out weakly to first, and Miguel Montero struck out. A lead-off double stranded? Surely not...

After that wobbly start, Kennedy settled down, and was his usual strike-throwing self. Each of the first 12 batters he faced saw strike one (22 of 25 overall), and after the RBI double in the first, Kennedy faced one batter over the minimum through two outs in the seventh. There really weren't that many hard-hit balls off him: Goldschmidt had to make a good grab of a smash off Holiday to end the sixth, but there were also a lot of strikeouts, many of them on Kennedy's change-up, which seemed particularly effective. He went seven strong innings, on an economical 94 pitches allowing five hits and a walk, with eight strikeouts, and two runs.

The Diamondbacks scored the first run of the year in the fourth inning - and followed it rapidly with their second and third. It started with a nice single the opposite way by Montero, with two strikes: it was nice to see him not take one of his five-run homer swings, and I hope this is something we see more of this year. It was followed by another good piece of contact from Paul Goldschmidt, blooping a single over short, and Jason Kubel drove in the first run with a fly ball that split the outfield for an RBI double. A.J. Pollock then got the big hit, capitalizing on an Adam Wainwright meatball, which the Cardinals' CF couldn't just catch at his shoes, scoring two more runs.

Arizona gave an impromptu performance of Jekyll and Hyde: The Base-running Year in the fifth. Gerardo Parra singled to lead things off, but tried to steal against Wainwright - who only surrendered two SB all last season - and Yadier Molina, who as everyone knows, is among the best at killing runners in the majors. The result was predictable, and the margin on the first TOOTBLAN of 2013, so embarrassingly large one wonders if it was a missed hit and run. Irritation was enhanced by the Prado double which followed, that would likely have scored Parra regardless.

However, the smart side of base-running showed up, on an infield hit by Aaron Hill which bounced away from the first baseman: Prado motored round third and scored without a throw, to make it 4-1. The Cardinals pulled that run back in the seventh, after what seemed like an odd bit of positioning and first move by Parra led to a Molina double, who then came home on a single. I suspect Parra might still be slightly unfamiliar with the position, this being only his 66th major-league start there. However, the provider of the single was out at second, trying to advance on the throw, ending the threat.

The Diamondbacks offense wasn't finished either. Their half of the seventh started as the first had, with a Parra double, and Prado made sure he wouldn't be stranded, by following with one of his own. Hill singled and Montero got his first RBI of the year with a sacrifice fly, to deliver tacos to the hungry fans at Chase [okay: anyone who cares to pop in to participating Taco Bells tomorrow, between the hours of 4 and 6pm, and purchase themselves a large drink.] The 15 hits by the D-backs tied the record for a season opener, and in 57 homerless games last year, we only reached the taco level eight times. I've decided I like this "Diamondbacks way" - tonight, at least!

After Kennedy departed, he was replaced first by David Hernandez, and then by Brad Ziegler, who did absolutely everything you might want from your bullpen, retiring all six batters faced, with so little drama, they should be hired to write scripts for the CW. Hernandez got two strikeouts, though Ziegler clearly has to work on something, as his last batter, the final out of the game, hit the ball in the air to Kubel in left-field. That's just un-Ziegleresque. Still, the net result was perfectly acceptable, and the full house got to hear D-backs Swing rock out at Chase for the first time in six months or so.

Parra became only the second Diamondbacks to have a four-hit game on Opening Day since Steve FInley went 4-for-4 with a home-run on Opening Day, thirteen years ago against the Phillies. Our other replacement outfielder also had an excellent evening, A.J. Pollock getting three hits, while there were two-hit nights for Martin Prado, Aaron Hill and Jason Kubel, and Paul Goldschmidt got a hit and his first intentional walk of the season - off a left-hander, naturally. Every starting position player except Cliff Pennington had a hit - he had a rough night, going 0-for-4 with a trio of strikeouts. He and Kennedy combined for five K's; slots one through seven had only three.

Also worth noting, the first regular-season appearance of new commentary pairing, Steve Berthiaume and Bob Brenly. Early review - well, comments in the GameDay Thread! - appear largely to have been positive, with allowance for the fact that it's still early days yet, in terms of chemistry. One thing I noticed in particular, was there seemed to be a lot more discussion of pitching: it was a topic that seemed more secondary to Daron Sutton and, particularly, Mark Grace, but there were some interesting insights here into the mindset of the pitcher. I think we'll be okay, but Steve really needs more obvious sarcasm when he says, "Diamondback great, Eric Byrnes"... 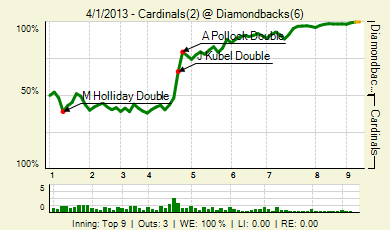 We'll be back tomorrow, at the slightly earlier start time of 6:40pm, when the same two teams face off. It'll be Trevor Cahill starting for Arizona, seeking to build on an excellent spring, and Jaime Garcia going for St. Louis. Let's go for 2-0!