We may see longer games this season. But I doubt we'll see a weirder one. Arizona blew another lead in New York, but the veteran presence of Cody Ross and Eric Chavez came up trumps, and we salvaged the series finale.

You want weirdness? I'll give you weirdness. Tonight's game included:

It wasn't easy, it wasn't pretty, and the Gameday Thread threatened to turn nasty at some points. But the end result was a victory, snatched from the jaws of defeat, out of the mouth of an earlier win. What might well be forgotten is the third consecutive sterling start by Patrick Corbin. He allowed just two hits over seven innings, with three walks and seven strikeouts: the only damage suffered was a solo home-run off the bat of Robinson Cano, and he's hardly the first pitcher to have had that inflicted on him. Three starts in, and Corbin's ERA is 1.42, having allowed 13 hits in 19 innings of work. So far, we certainly picked the right guy for the #5 spot.

Gregorius got his first start as a Diamondback, and wasted absolutely no time making an impression. The alleged "no-hit" shortstop deposited the first pitch he saw in the third inning, into the bleachers in right field, where it was caught by some guy in a Diamondbacks cap. However, it was not a D-backs fan. The spectator is question was the notorious Zack Hample, who has made a dubious "career" out of ballhawking, and switches hats at will to improve his chances of snagging a ball from players by pretending to be a fan. Utter fakery. Naturally, he parlayed Didi's first home-run ball into some bats, and allegedly, a meet and greet with the player.

The Diamondbacks extended the lead in the sixth inning, when Martin Prado cranked his third home-run of the season into the bleachers, and the way Corbin was pitching, that looked like it could well be enough. Even after Cano's homer put the Yankees on the board in the bottom of the same inning, Corbin finished strong, if somewhat fortuitously, getting Ichiro to line into an inning ending double-play in the bottom of the seventh. We knew where this game was going to go from here. David Hernandez for the eighth, then J.J. Putz to close things out in the bottom of the ninth.

Except... Hernandez was wild, and after getting the first out, walked two Yankees, around a single, to put the tying run (in the shape of pinch-runner Lyle Overbay: yes, as I said in the thread, the Yankees are using a 36-year old with an average of 1.1 stolen-bases per season, last used as a pinch-runner in 2009, as a basepath wiz!). It looked like he then hit Cano with a pitch to tie the game, but the umpire's decision was that Cano had actually swung at the pitch, making it strike three. Another K followed, and disaster had been averted. Or so it seemed: little did we know that it had only been temporarily postponed.

For in the ninth, J.J. Putz blew his second save, allowing a one out home-run to Francisco Cervelli, a man who is in his sixth major-league season and now has seven homers. However, there's a very strong case to be made for fan interference - and it came in the shape of the aforementioned dickhead ballhawk, Mr. Hample. Take a look at the screenshot and ask if he leaned into the field of play to catch the ball? Of course, as Jeffrey Meier will tell you, you could run on to the field at Yankee stadium, and tackle an outfielder as he's about to make the catch, and the umpires still wouldn't call fan interference - providing it helps the Yankees, of course. 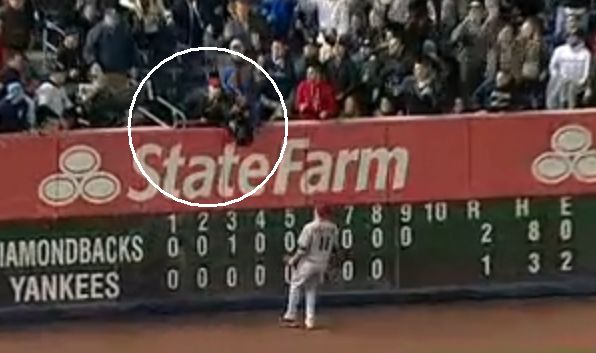 MLB Rule 3.16
When there is spectator interference with any thrown or batted ball, the ball shall be dead at the moment of interference and the umpire shall impose such penalties as in his opinion will nullify the act of interference...
Rule 3.16 Comment: There is a difference between a ball which has been thrown or batted into the stands, touching a spectator thereby being out of play even though it rebounds onto the field and a spectator going onto the field or reaching over, under or through a barrier and touching a ball in play or touching or otherwise interfering with a player. In the latter case it is clearly intentional and shall be dealt with as intentional interference as in Rule 3.15. Batter and runners shall be placed where in the umpire's judgment they would have been had the interference not occurred.

Quite why A.J. Pollock didn't appeal, I'm not sure. Inexperience? Fear of the crowd? Hard to say. But it would certainly seem to have merited a review by the umpires. It would have been particularly amusing to see fan interference called, as it would have meant Hample being escorted from the stadium, and missing out on the his demanded meet 'n' greet with Gregorius - I hope that offer was rescinded after he cost Arizona the lead. But at the time, all we could think was a petunia-like, "Oh, no: not again." For it was the third night in a row that the Diamondbacks had blown a multi-run lead in Yankee Stadium. It felt like the middle of the 2001 World Series all over again.

Still, the game was only tied, and we got a solid inning from Matt Reynolds, and a slightly-less-solid-in-fact-rather-wobbly inning from Heath Bell, which involved a lead off hit and another knock before he posted a zero. Meanwhile, we had stranded a Cody Ross lead-off double in the 11th, as an A.J. Pollock bunt attempt [insert rant about the futility of that tactic] failed. The top of the 12th started in similar fashion, this time with Gerardo Parra doubling. Prado productively moved him to third with a fly out, then Paul Goldschmidt reached on catcher's interference - the same way Didi had reached in the ninth. We only had two of those from 2010-2012; we've had three already this year.

Miguel Montero walked and Ross came through big , singling to give us the lead. Eric Chavez came up even bigger, crushing a bases-clearing double to right-center, a 6-2 lead. Perhaps surprisingly, Arizona went with Tony Sipp rather than Brad Ziegler for the bottom of the 12th, but Sipp got the job done, retiring the Yankees in order, and the D-backs ran their extra-inning record to 3-0. Goldschmidt and Ross each had three hits, while Chavez had a pair, and Gregorius doubled his second time up, to add to his homer. He's our 7th player to homer in his first AB for us: the others were Alex Cabrera, Bobby Estalella, Jose Cruz Jr., Felipe Lopez, Parra and John Hester. 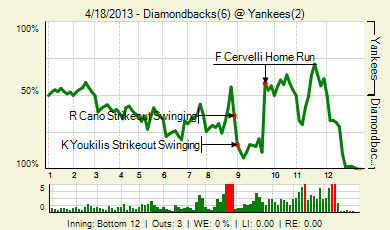 Comment of the night? Short and to the point.

After this late night, it's off to Colorado where the Rockies have been red-hot lately [in sharp contrast to the weather during their series against the Mets]. Stay tuned for 'charmer's Trends coming later tonight.