Let's see if our good young 'un can beat the Yankees good old 'un, as it's a battle of left-handers in Yankee Stadium tonight, Wade Miley taking on CC Sabathia.

Marte gets the start at DH in his 10th career game - he will be the 15th player in NL history to start at DH for his side that early in his career. The only other since June 2009 to do so, was Mike Costanzo for the Reds last year, also against the Yankees. [It was Costanzo's first start in the majors, and he has one since] The previous fastest for Arizona was Robbie Hammock, who DH'd against Minnesota in his 14th game, in 2003. In case you wondered (I did!), four National Leaguers have made their debuts as starting designated hitters: the most recent is Nick Stavinoha of the 2008 Cardinals in Boston. The other three are Ryan Shealy, Prince Fielder and Eric Valent.

Sabathia has faced the Diamondbacks before, but I'm not sure it'll give us much of a track record as our line-up that day included the likes of Junior Spivey, Jose Guillen and Mark Grace, back from 2002 when Sabathia was with the Indians. Eric Chavez, Josh Wilson and Pennington do have some experience against him, from their time in the American League, but the results haven't been pretty, with that trio a combined 6-for-51. No wonder the first two will be sitting this one out. Miley is almost entirely unknown to the Yankees, with Ben Francisco (1-for-6) their only hitter to have seen him before.

Looking a little bit further ahead, to the Diamondbacks' next stop in Colorado, I don't think there's much chance of the Rockies' game against the Mets being played tonight. The forecast temperature for 7pm tonight is 24F, with a wind-chill taking another dozen degrees off that. It should be a little better over the weekend, with highs up in the mid-50's, but Brett Hansen of FSAZ tweeted the webcam below, which should generally show you an image of Coors Field: 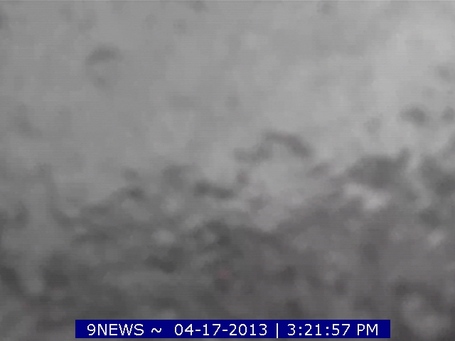 Yeah. Let's hope that clears up between now and Friday....