For the past four years Warren Ballpark in Bisbee has hosted a Vintage Baseball tournament. This is an account of this year's event, which took place last weekend, from my drive-by perspective.

Share All sharing options for: Mudcat and Malarkey: The 2013 Copper City Classic

(Side note: This was intended to be more of a photographic essay pic. However, the generic dollar store bran AA batteries in my camera ran out of juice shortly into the first day. I didn't bother to check them before I left, nor did I think about getting new ones at any point. I have a degree.)

To get to Warren Ballpark from any of the more populated bits of Arizona, you have to do quite a bit of rural highway driving. After leaving Interstate-10, you pass through Benson, Tombstone, St. David (where drivers are as adept at driving up to the Speed Limit as Barry Zito is adept as hitting 100 on his fastball.), and a whole bunch of desert and mountains before you get to Bisbee. However, it is not in the fashionable Old Bisbee that you'have probably heard about. It is southeast of there in the less cosmopolitan but easier to park in part of town known as Warren (hence the name.)

From a quick glance, Warren Ballpark looks like any other smallish stadium in America. The infield seating only extends to the ends of each dugout, and is wooden and built not-unlike a Roman Amphitheater. The outfield seats are difficult to access and don't quite face the field like you would expect.

However, Warren Ballpark first started playing professional baseball games in 1909. It has been home to pro, semi-pro, and high school games since then. As such, it purports to be the oldest continuously used Baseball field in the United States. Obviously, there is some dispute to that, but that is still a long time to be continuously playing baseball on one field. The list of players who have played on the field through its history is also impressive. You can find a pretty comprehensive book on the history of the park by Mike Anderson, who also plays Vintage Baseball and is a fountain of knowledge on the park and on Bisbee in general and is a genuinely nice guy.

The Copper City Classic is in its fourth year. It takes teams from the Arizona Territories Vintage Baseball League and elsewhere and has each team play three games each for the entertainment of the viewing public. The proceeds from ticket and concession sales go to maintaining and restoring the park. For the past few years, the main aim has been to restore the bathrooms at the park, which can only be described as "harrowing."

The entire locker room area underneath the stands does look like time has taken its toll. There is a certain charm to it, I suppose, and it's way fancier than any other place that I've played baseball. There is also an incongruous looking couch in the visitor's locker room. And I loves me an incongruous couch. 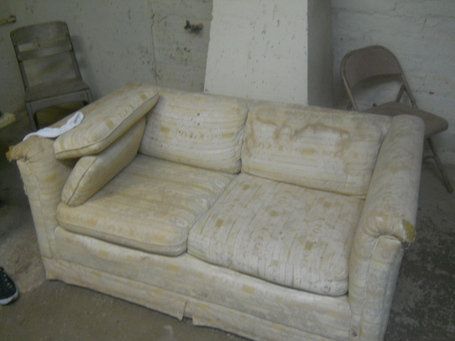 The six teams participating in the Copper City Classic this year were the Bisbee Black Sox, The Bisbee Bees (who are from the valley, so it's confusing), The Glendale Gophers, The Phoenix Senators, The Tucson Saguaros (that's who I play for!), and The Colorado Territorial All-Stars.

The ATVBBL uses 1860s baseball rules. Some of the main differences between those and modern rules, from their website:

Most games in the ATVBBL use rules from 1860. Some of the differences between those rules and modern baseball include:

If a ball is caught on one bounce, it's an out.

If a ball is caught off a foul tip, either on the fly or one bounce, it's an out.

Balls caught on the fly or one bounce by anybody (players from either team, spectators, etc.) are outs.

A ball is determined fair or foul based on where it first strikes the ground. It does not have to pass first or third base to be considered fair.

Fouls are not strikes.

No overrunning first base. If you overrun the base, you can be tagged out.

Balls and strikes were not usually called in 1860. The hurler's job is to pitch balls that the striker can hit. The defense is supposed to put out the striker, not the hurler.

The umpire's word is the law! Only the team captain is permitted to speak to the umpire, who is always addressed as "sir." Any arguing with the umpire, profane language, or ungentlemanly conduct is punishable by a 25 cent fine.

One fun aspect of vintage ball are the nicknames. Everyone is required to have an "Old Timey Soundin'" nickname (Like "Pop" or "Cracker Jack ") which can lead to a lot of fun. This year, I went simply by "Bag of Malarkey." You can get those under the boxed Malarkey at the Safeway for a cheaper price.

I was the hurler for all 19 innings of play that Tucson played. With the soft Lemon Peal balls the league uses, I find that a circle change-up grip helps me get it over the plate. Just a pro tip. The first game of the tournament was between Tucson and the Black Sox. Tucson won 7-4 and I had two hits in the game, so that was nice.

In the interim between games, I got to meet someone very cool. One of the honorees for the tournament was Earl Wilson, who pitched from 1959 to 1970 and threw a no-hitter for the Red Sox in 1962. He began his playing career in 1953 for the Bisbee-Douglas Copper Kings, who played in Warren. Wilson passed away in 2005, so his good friend Jim "Mudcat" Grant showed up to honor him, and he threw out the first pitch for the second game of the tournament. He also hung out and talked with anyone who wanted to. He was also around for the entire tournament, signing and selling merchandise, and talking about pitching to anyone interested. I only directly spoke to him briefly, but I listened to him talk about pitching for a good while. I didn't take notes (because, again, I'm smart.) but the two things I remember distinctly were:

1. He drew a 3x3 grid on a piece of paper and used it to show arm slot for various pitches, which I thought was cool.

2. He said that you should learn how to pitch a sinking fastball of some sort if you're able to.

Before the second day of games he also sang the National Anthem, and he sounded pretty darn good. He's a very nice man, and it was an honor to meet him. He co-wrote a book that was published in 2007 called The Black Aces, which is about every African-American 20 game winner in MLB's history. I bought a photo autographed by him of him, Larry Doby, and Satchel Paige when they all were playing for the Cleveland Indians in 1958. 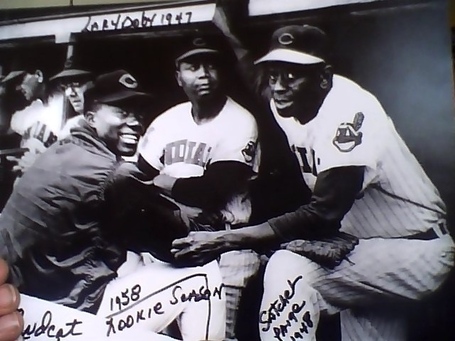 The second game I played in pit the Saguaros against the Bisbee Bees. That one ended with a 5-4 walkoff win by the Saguaros, when "Knuckles" hit a game-winning double that drove home "Kid Missouri". "Bag of Malarkey" hit like one, going 0-4. The Saguaros played one game on the second day of the tournament, defeating the Colorado Territorial All-Stars 7-2, giving us a 3-0 record, and officially ending our season over .500 for the first time in our three year existence.

I've had loads of fun every year I've played in the Copper City Classic, and I would suggest that if you have a day free the next time it comes around that you drive down and check it out. Check out Warren Ballpark in general if you're ever in Cochise County. The view of the mountains when you're standing in the batter's box is awesome, and it's worth checking out just because of its history. You can always donate to Friends of Warren Ballpark to help with restoration.

And if you ever feel like playing Vintage Baseball here in Arizona, you should! The league is always looking for more players.