Diamondbacks 5, Pirates 6: An Unpleasant Trip To The Food Marte

The Diamondbacks rallied from behind Brandon McCarthy's first-inning run, but his five-run fourth inning was too much this evening.

Share All sharing options for: Diamondbacks 5, Pirates 6: An Unpleasant Trip To The Food Marte

The game gets off to rather loud start as Starling Marte laces a single to center. Neil Walker comes up to bat and Marte successfully steals second base. Walker flies out to center as does McCutchen. Garret Jones singles on a ground ball to short that was deflected by Aaron Hill that scores Marte to make it 1-0 in favor of the Pirates. Russel Martin hits a ground rule double, but Pedro Alvarez grounds out in the next at bat to end the inning.

The Dbacks' half starts off in a somewhat similar fashion when Gerardo Parra draws a walk. Prado is next up and strikes out. Aaron Hill comes to bat and follows Gerardo's example and walks while Miguel Montero hits a double in the next at bat to make it 2-1 Dbacks. Goldy lines to third and then Kubel comes up to bat and whacks a two run homer to left field to make the score 4-1.

Not much else happens until the top of the 4th when Pedro Alvarez reaches base thanks to a fielding error by Kubel. Travis Snider draws a walk. Clint Barmes flies out and James McDonald singles on a ground ball to center. Starling "Bane of our existence" Marte hits a double to right that scores McDonald and Alvarez. Neil Walker then hits a single to score McDonald. McCutchen grounds out, but Garret Jones hits a single that scores Neil Walker to make the score 6-4 Pirates.

The game settled down again until the bottom of the 7th when Alfredo "Good" Marte hits a double to left to start the bottom of the 7th. Parra ground out in the next at bat while Prado and Hill both draw walks. Montero comes up to bat and hits a flyball to center but McCutchen makes a good grab and instead of a double, it ended up being a sacrifice fly to make the score 6-5 in favor of the Pirates. Goldschmidt is next up to bat, but he flies out to right. The Dbacks couldn't get it going again, and the Pirates took the second game of the series with a score of 6-5. 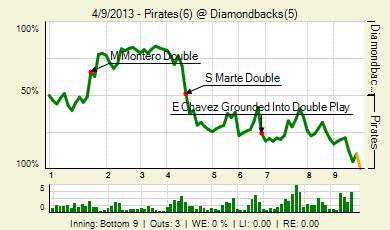