Scoring a Runner on Third with Less Than Two Outs: Is It a Skill?

'Clutch' is an attribute that has taken a lot of abuse in recent years. Once a fundamental part of the game, its border within baseball thinking have been pushed nearly to a place of faith only.

Share All sharing options for: Scoring a Runner on Third with Less Than Two Outs: Is It a Skill?

Most of what is said about baseball is just an excuse to fill time. I don't think there's anything wrong with that, but its repetition can provide for themes taken for granted that should probably be thought about more critically.

Whilst watching the World Baseball Classic this past weekend, one of the color commentators said something to the effect of: "Look for any team that scores runners from third with less than two outs around 65%1 or better, and they're going to be amongst the better teams in a given year."

Being a Diamondbacks fan, I immediately filtered this thought through recent experiences of watching the team. It reminded me how the D-backs seemed to be mind-bottlingly bad at scoring a runner from third. Although the scenario probably isn't as common as my faulty memory is insisting, it just seemed like nearly every time the D-backs would start the inning with a double or a triple, that runner would be subsequently stranded.

Being the nerd that I am2, I set up a dataset for running from 2004 to 2012 that would show each team in the majors winning percentage on a given year, and its corresponding PoRSfTwLTTO3. I also noted the NL and AL average for PoRSfTwLTTO each year to see a kind of baseline (it's about 50%, give or take a percentage).

Is there any correlation between scoring a runner from third with less than outs and winning? 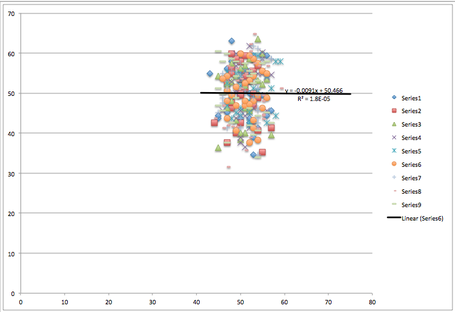 All stats provided by Baseball Reference.

What the above shows is that there is virtually no correlation between scoring runners from third and winning percentage. The range is between 43% and 59%, but it doesn't seem to matter over the course of a season, and a team with the lowest end might have a good year (2011 Braves), and a team on the highest end of the scale might have a bad year (2009 Orioles).

These aren't just outliers, there's simply no relation between the two variables.

1. This seems to be a case where if you quote a specific number, it'll add validity to what otherwise would be a laughable premise. Jokes on me, I just spent 3 days on this!

3. Percentage of Runners Scored from Third with Less Than Two Outs.

4. It might seem unfair to limit the measure down to PoRSfTwLTTO, but articles debunking or defining clutch as a skill are scattered all over the Internet. Besides, the commentator really did limit it down to this scenario.