The first SnakePitFest of 2013 took place at Chase Field yesterday, with a solid turnout for the World Baseball Classic game between USA and Canada to decide who'd go through to the second round. Excitement was had, TCBY consumed and patriotic phrases were chanted.

Share All sharing options for: USA 9, Canada 4: A WBC Eye-Witness

We opted to get things started early, meeting at the Rose and Crown at 11am. What we hadn't realized, was that the Wheels of Britain Car Show was also going on, next door at Heritage Square, which made things a little more crowded and parking a little trickier than expected. I don't think the Rose and Crown knew it was going on, as the staff seemed a little more harried and the service even more languid than usual. Still, we were not exactly in a hurry, and we handed out tickets, enjoyed a little brunch (I heartily recommend the BBC sandwich) and, there might have been a Stella Artois consumed before noon. I'm just saying.... 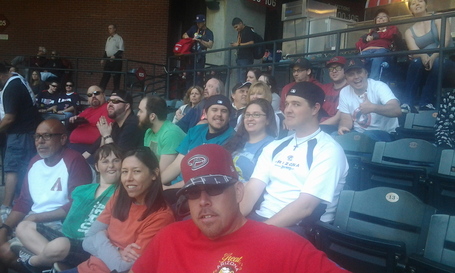 SnakePitWBCFest represent! Think we squeezed about everyone into this pic...

We were sitting down the first-base line in the corner behind the Team USA bullpen. It was kinda weird: when I bought the tickets online, they were about the only ones shown left in the section as available, but when we took our seats, we were sitting largely in splendid isolation [people drifted in and out, but it was hard to tell if they were the genuine seat-holders. The ushers seemed to be fairly lax in terms of ticket checking] There were certainly a good number of Canadian fans present, though I'd still say the majority were supporting the US: maybe 60-40? Me, I had no dog in this fight. After all, you're both former colonies... :)

Even with the upper deck closed, it was a good atmosphere, helped by the closeness of the game. Canada struck first, with a two-run homer down the line towards us in the second - the ball from that was thrown back, resulting in a loud chant of "USA! USA!" America tied things up in the fourth, taking advantage of an error, but Canada retook the lead in the sixth. That was how things remained as we headed in to the eighth inning, and the game was fairly whizzing along at that point, having taken barely two hours to complete seven frames. We'd also seen the first D-back of the day, Heath Bell pitching a clean inning for Team USA, and being warmly received by the Arizona crowd. 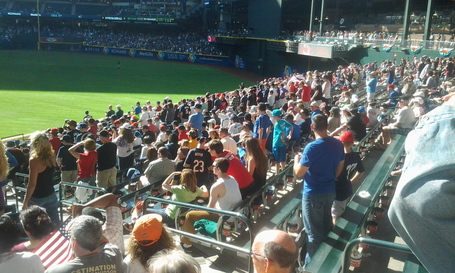 Meaningless exhibition? Not according to all these fans, standing up to
cheer on David Hernandez with one out in the eighth.

However, the eighth inning took what seemed like forever to complete, and that was definitely something of a double-edged sword. The roof at Chase Field was open, which was fine initially, with our seats in the shade: indeed, it was perhaps slightly chilly. But as soon as the sun came into view, we were reminded that even in March, it can be pretty intense. Mrs. SnakePit had brought a hat, but had taken it back to the car after the Rose and Crown, a decision she later had cause to regret. She and Mrs and Mr Asteroid were forced to turn their jerseys into impromptu sunshades long before the end of the contest.

The top of the eighth saw America threaten, with runners on first and second, as competing chants of "Let's go, Canada!" and "USA!" reverberated round Chase, to the extent I felt like I was watching a John Cena bout on Monday Night Raw. We were particularly concerned, because Joe Torre have brought Willie Bloomquist in to run the bases for Joe Mauer. Yep, Mr. TOOTBLAN, used as a pinch-runner twice in 177 appearance for Arizona. But it was the Americans who came out on top, as Adam Jones lined one to the outfield wall, with the runners in motion, for a two-run double that turned a deficit into a lead. Another run was added, to make it 5-3 to the US. 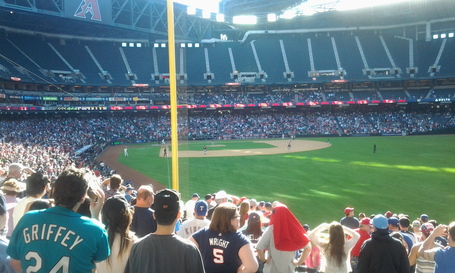 And Team USA moves on to Miami for the second round, which starts there on Tuesday.

However, things weren't over yet, even though the usually very reliable David Hernandez was in for Team USA, to pitch the bottom of the eighth. Three singles loaded the bases with one out, putting the tying run in scoring position for Canada, and bringing the crowd to their feet. Though the Canadians did get a run on an RBI groundout, making it a one-run game, Hernandez got the out, and Steve Cishek closed out the inning without further damage. The American offense then blew the game open in the ninth, scoring four times and giving Craig Kimbrel a nice five-run lead, which he didn't need, retiring Canada in order, striking out Joey Votto to end the game - Bell got the win.

There were 22,425 on hand for the contest, which is close to 50% up on the tally when the same two teams played in the 2006 Classic (15,744), though that was during the week. But overall, the six pool games the last time the WBC was in Arizona totaled crowds of 91,205, compared to 115,183 this time, which is a 26% increase. Despite all the nay-sayers, it would seem to have been a successful event on this basis at least, and it's definitely one I'd like to see back in the state next time round, in 2017. Besides: any excuse for a SnakePitFest is a good one. Thanks to all who joined us for this one, and we'll reconvene at Salt River Fields in two weeks for SpringTrainingSnakePitFest!