Brandon Webb finally put the final punctuation mark on his career that, at its peak, had him one of the best, if not the best pitcher in the major leagues. Let's look back and remember some of the most memorable elements in his career.

Share All sharing options for: Brandon Webb: A Remembrance

Note, I can't say "debut", since that actually came out of the bullpen five days previously, as he tidied up the final frame of a 4-0 loss to the Expos. Brad Wilkerson was the first batter he faced, and he put up a zero, around a walk, without allowing a ball out of the infield, on a K and two groundouts. But his true debut came against the Mets in New York City, in the opener of a double-header and was truly amazing. Over seven innings, Webb allowed only three hits and one walk, keeping the Mets scoreless while striking out 10. No pitcher has pitched seven shutout frames with double digit K's so early in their career since.

Webb was optioned back to Triple-A before the night-cap, with Randy Johnson coming off the DL to start that game. Said manager Bob Brenly, "I think he understands it; he might not like it. He understands by his performance today, he moved to the top of the pecking order when it comes time to reach down again.'' That didn't take long: five days in fact. Johnson needed knee surgery, and Webb got the call to start the next time the slot in the rotation came up. Brandon never saw the minor leagues again.

Webb had some great games for the Diamondbacks, but there can be little argument that his finest was a meaningless Saturday night game at Chase Field against St. Louis. It took him only 96 pitches for his third complete-game shutout of the season, against a very solid Cardinals line-up, featuring names like Albert Pujols and Scott Rolen, a Rolen double being the sole hit managed by the opposition. He didn't walk a batter either, 22 of the 27 outs Webb recorded didn't leave the infield, and it took him only seven pitches to finish things off in the ninth inning - on a trio of groundouts, naturally.

The game took only one hour, 54 minutes, the second-quickest in franchise history at Chase Field, and Webb threw only six off-speed pitches the entire game, relying on his fastball and trademark sinker. Said the pitcher afterward: "I was pretty aggressive in the strike zone as they were swinging the bat. They put the ball in play early, mostly on the ground. That worked to my favor tonight. I was able to keep the ball down so they could do so." It was a performance that likely cemented Webb's grasp of the Cy Young award he won at the end of that season.

Three consecutive shutouts is a rare achievement, only achieved by Cliff Lee and Webb since 1998. Five starts in a row without conceding a run is rarer still: Ryan Dempster and Zack Greinke are the sole others to do it since Orel Hershiser had six straight in 1988. And the 42-inning streak without a run allowed? No-one had matched that since since Hershiser either. It started innocently enough, with a zero at the end of a July loss to the Cubs, but after the shutout in his first start of August, attention began to be paid, and it reached a level of media scrutiny rarely seen for a Diamondback after an utterly dominant start against the Braves, a complete game two-hitter.

All the while, Webb was his usual calm and unassuming self: "I don't know," he said after the Atlanta shutout. "I'm not even thinking about it. It hasn't consumed me at all... Right now, I'm like, it's pretty sweet, but after I do it, it's like, 'Oh my gosh. Three shutouts in a row.' I couldn't believe it. But now I have to focus on the next game." The streak ended in the first inning of his next start against the Brewers - driven in by the long-time object of Arizona fan hate, Prince Fielder - though Webb still got the last laugh, picking up the W.

The Diamondbacks hadn't had a post-season victory since the 2001 World Series, having been swept away by the Cardinals the following year. And with the Cubs also sending their ace to the mound, Carlos Zambrano having matched Webb's 18-win total that season, it was a statement game. Both starters lived up to expectations, and through six innings, each man had allowed one run on four hits. But after Webb added a 1-2-3 seventh to his line for the day, Lou Piniella made a fatal mistake, pulling Zambrano after just 85 pitches, and Carlos Marmol gave up a go-ahead home to Mark Reynolds, making Webb a winner in his playoff debut.

"I thought I'd be a little bit more nervous. And I was a little bit the first few pitches, but I was able to calm those pretty quick. I didn't feel it was a must-win game. Obviously, we want to go out there and win every ballgame. It was a huge win for us, but I don't think it's a must-win when we've still got a bunch of games left."
-- Brandon Webb

Over that three season period, Brandon Webb was likely the best pitcher in the National League. His 56 wins were the most by anyone in the majors, and his 19.9 fWAR during that time was more than six wins more than the second-best NL hurler, Roy Oswalt [bWAR agrees with the ordering, but the margin is less, Webb's 18.2 compared to Oswalt's 15.7]. The likely possible alternatives for the title of best pitcher in the majors at that time are C.C. Sabathia (20.2 fWAR, 16.8 bWAR) and Johan Santana (16.6 fWAR, 18.9 bWAR), but if you take a composite tally of both metrics, they trail Webb.

It's probably the case that we didn't genuinely appreciate Webb at the time, as much as we should have. In the decade from 1999 on, fans in Arizona were treated to some of the greatest pitchers in the game on an almost everyday basis. Over that ten-year period, Diamondbacks' pitchers won five Cy Young awards and were runner-up on five occasions. Maybe only the Glavine-Smoltz-Maddux trio of the Braves gave their team a greater run of success at the top of their games. Coming at the end of that run, perhaps we were desensitized to really good pitching, and it was only when he was gone, that we realized how good Webb truly was. We can but hope to see his like again. 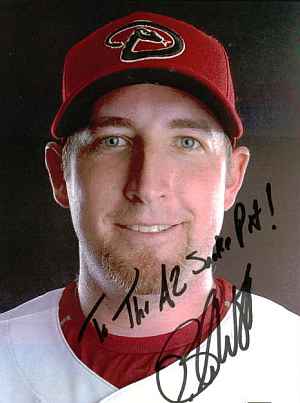