The frozen wastes of...er, Scottsdale were too much for the Diamondbacks to cope with yesterday, so they relocated to warmer climes, e.g. Phoenix. Here's details of that, a gallery of some of the best Twitpics of the day, and all the other news.

We have in the past, seen spring training interrupted by some unusual things - bees, for example, seem to have been a semi-regular occurrence in Arizona over the past couple of years. However, has it ever before been snow that has wreaked havoc with preseason practice? Such was the case yesterday, as the snow and frost left over from yesterday's unexpected delivery rendered Salt River Fields unplayable. After an attempt to push things back to the afternoon proved to be futile, the white stuff hanging around, it sent the Diamondbacks scurrying to find alternative accommodation for their day's activities.

They ended up relocating to the Athletics' practice fields over at Papago Park, after GM Kevin Towers called up his Oakland counterpart, Billy Beane, and brokered a deal where the D-backs agreed to use the DH when the two teams met at Salt River Fields next week. Manager Kirk Gibson was unfazed by the concession: "I'd already given (A's manager Bob Melvin) that, so we said sure.".Part of the problem was that the team had a short practice on Tuesday, due to the paintball excursion, and activity yesterday was also restricted to indoor work due to the inclement weather, so Arizona felt that they really needed to get their reps in, wherever they could. Said Gibby:

And the award goes to... 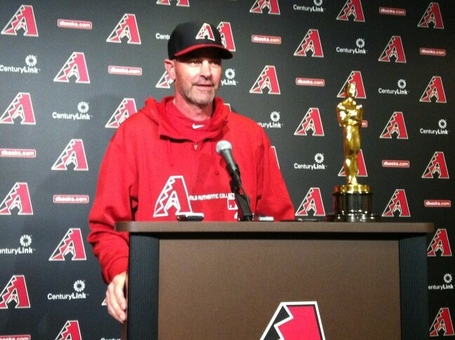 "#Dbacks mgr Kirk Gibson poses with the Oscar Award. It's on a road trip." - Steve Gilbert

There wee quite a few similar pics to be found in the Twitterverse yesterday, as a number of D-backs players and staff took the chance to get their pictures taken with the famous statuette, as part of the first-ever Oscar road trip, which stopped at various places in Phoenix on Thursday - including the D-backs camp. Among those who accepted the award (at least, temporarily!) were Derrick Hall and Luis Gonzalez, Jodi Jackson, Adam Eaton, Brad Ziegler, Archie Bradley, and as shown above, Kirk Gibson. Asked if he deserved an Oscar for his World Series homer, Kirk replied, "No, I got a ring for that."

Booty Gets The Call

The MLB Network series The Next Knuckler, which featured a number of former NFL quarterbacks competing to try and learn how to throw a knuckleball, under the tutelage of Tim Wakefield, reached its climax last night. The final two left were Josh Booty and David Greene, and it was Booty who came out on top, and so will be turning up at Diamondbacks training camp tomorrow to...well, let's just leave it at "tomorrow," shall we? Though I liked Greg Swindell's post-show Tweet on the topic - he actually did experiment with the pitch at one time, saying, "There was one time when I threw it and the catcher had his mitt down by his knee and it hit him in the mask."

If Josh Booty makes the dbacks as knuckle baller. And I didn't in 2003. I will be really. Really. Really mad. Reality. Or not.

Best shape of their lives

Jason Kubel spoke about last year's slump, but couldn't figure out a reason for it. Kevin Towers seemed to have an idea, saying ''Probably playing every day in the outfield. He wasn't used to that in Minnesota. 'Half the year, he probably DH'ed and his legs, just kind of lost his lower half. Just the daily grind of going out there and playing in our outfield, which is pretty quick and it's an offensive park so you're pretty active every day.'' Towers added that Kubel had hired a personal trainer over the winter and arrived at Salt River Fields in ''probably the best shape he's been in in a long time.'' Fingers crossed that holds up for 162 games this year.

Best shape of their lives (not so much)

Nick Piecoro reports that prospect Keon Broxton is likely to miss about two months, after having surgery earlier this week, to repair a broken bone in his hand. The outfielder was due to enjoy his first time at big league camp, but according to farm director Mike Bell, "He got hit on the hand by a pitching machine or a pitch that got away. He was just trying to get ready for spring training. It’s a shame, but he’ll come back and be fine once it heals." Nick's most recent blog entry is also worth a read, for Matt Davidson's retelling of an epic at-bat he enjoyed while down at Mobile last season. I could almost hear the theme from The Natural playing as I read it...

The Diamondbacks hope - weather permitting - to be back at Salt River Fields and on their regular schedule today though contingency plans involving Papago Park have been made. The forecast for last night in Scottsdale called for a low of 32F, with a 40% chance of precipitation, so we'll see how that plays into things. I'm sure they'd like to take the chance to get the last kinks out, before Cactus League play begins on Saturday.