With the "reporting" out of the way, it was on to the actual practicing today, at least for pitchers and catchers. There was some concern about Didi Gregorius, Miguel Montero spoke frankly about his issues with Trevor Bauer, and Kevin Towers gave his first media briefing.

Let's start with Didi Gregorius. It's a good job we weren't absolutely relying on him being our starting shortstop in April, because it does not look like he will be ready. Kevin Towers told Nick Piecoro yesterday that Gregorius has been shut down for the last month, experiencing elbow pain after a long-toss session in January, not long after the trade was completed. Team physician Dr. Michael Lee "said it was nothing serious and we decided to err on the side of being cautious. Dr. Lee felt it would be best to take four weeks to shut him down, with no swinging a bat or throwing, and then start ramping him up... It’s nothing serious, no surgery or anything like that."

More on this came out today, including the somewhat surprising nugget that we didn't do a physical on Gregorius at the time of the trade. Apparently, that isn't particularly standard practice, with a young player who has not had any history of issues, but still... Towers added today, "If there's a strain, it's the right area to have a strain. He doesn't need Tommy John, doesn't need to be surgically repaired. Nothing we're overly concerned about, but just with a new player here and with no history with the player, just trying to err on the side of being cautious, if anything."

Speaking to KTAR 620 at FanFest on Saturday, catcher Miguel Montero was surprisingly forthright about the problems he had dealing with Trevor Bauer. (there's also amusing stuff about Miggy's speed on the basepaths, or lack thereof. He reckons he's the second-fastest catcher in the division!). "When you get a guy like that and he thinks he's got everything figured out, it's just tough to commence and try to get on the same page with you... He never wanted to listen. He's got his ways, and it's tough to change it," said Montero, adding ominously,. "Good luck to Carlos Santana there." Santana will be catching Bauer this season in Cleveland.

Later in the afternoon, this popped up on Trevor Bauer's Twitter feed. Coincidence? Hmmm...

Look for a new song on my soundcloud tomorrow called "you don't know me" ft. @connorgarelick

After Gibby's first media briefing of the year yesterday, it was time for GM Kevin Towers to take the podium, and answer questions from the media at Salt River Fields. Topics covered include the Gregorius arm, bullpen options both versus lefties and at the end of the game (classic Towers quote: "People say I'm enamored with the pen. I am."), the shift towards a more contact-oriented line-up, and the battle for the last spot in rotation, which we discussed earlier today. Hear the whole thing through the player below.

And finally, David Hernandez and Wade Miley had a bet. It apparently had to do with basketball. Judging by the photograph below, DH sporting jean shorts and an "I ♥ PHX SUNS" T-shirt, I guess he lost! 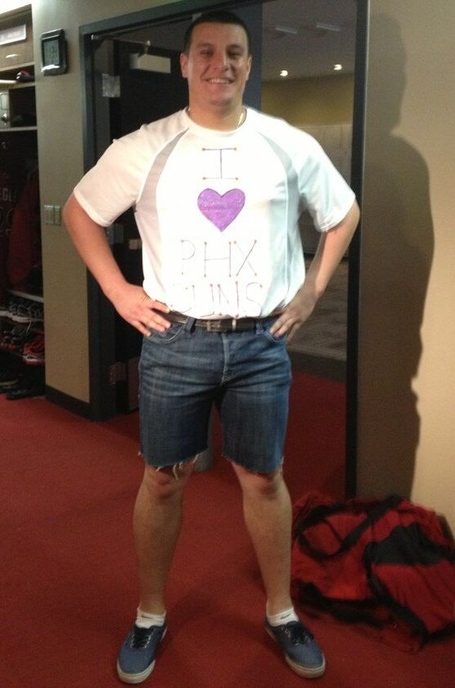