The History Of The Diamondbacks: Second-Base

With Aaron Hill under control for the foreseeable future, it seems fitting to review the history of the team at the position which he plays. Over the years, we've had some good second-basemen, some bad ones...and Augie Ojeda. Let's turn on the Wayback Machine and see what we see.

Share All sharing options for: The History Of The Diamondbacks: Second-Base

Second base has been one of the better positions for the Diamondbacks over the years. More often than not, the team has seen league average to above production from the position, and the only times they were seriously below, was during the Gurgling Vortex of Suck that was 2004, when just about everywhere on the D-backs diamond was replacement level or worse.

That started surprisingly early with the 1998 team, even though there was a revolving door at the position. Quick pop quiz: who was the starter at second-base in the first ever Diamondbacks game? If you remembered Edwin Diaz, you're a better fan than I, not least because it was one of only four ever starts in the majors for him. We had seven different players penciled in at various times to the starting line-up. Andy Fox led the way with 55 starts, in front of forgettable (or unspellable) names like Andy Stankiewicz and Danny Klassen, but all told, they didn't do too badly.

Jay Bell had switched from shortstop to second at the end of the year, and took over full time the following season. It was a huge success particularly on offense. Bell's 38 home-runs - including a million-dollar grand-slam - has not been matched at the position by a National Leaguer since, and has been surpassed in the majors by only Rogers Hornsby (three times), Alfonso Soriano, Ryne Sandberg and Davey Johnson. He started all but 17 games that year, with Tony Womack covering the rest, and was also the everyday starter in 2000, though with less power.

Bell lost his starting job to Craig Counsell in September of 2001, but scored the winning run in Game 7, coming home from third on Gonzo's bloop single. However, he injured his calf muscle in spring training the following year, and never really came back. Junior Spivey took over, hit .301 for the year, and became perhaps the most surprising All Star in team history (though, let's be honest, Bob Brenly picking the team might just have have something to do with that). He was also the 2B for Opening Day 2003, but didn't hit as well, and also missed a month with injury, Matt Kata taking over.

Spivey was part of the Richie Sexston trade to Milwaukee, the expectation being that Roberto Alomar would become the regular 2B. However, like so much in 2004, that idea went to hell, when Alomar broke his right hand in April, after being hit by a pitch from Ben Sheets. He managed 23 starts, with the main replacement being Scott Hairston, whom I'd forgotten played the position. He and the other substitutes didn't hit very much, couldn't field and were no great shakes in base-running, leading to franchise worst -1.0 fWAR from the position. Things were much better the next year: while Craig Counsell still couldn't hit, he was solid enough elsewhere, and provided a much-needed steadying influence as the team rebuilt. 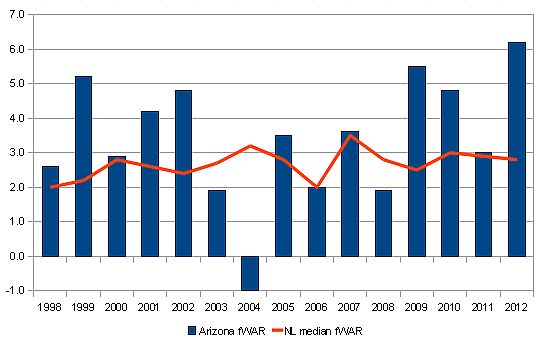 2006 saw the beginning of the Orlando Hudson era, who would start 393 games at second for Arizona over the next trio of seasons, winning a Gold Glove twice. However, he missed the 2007 post-season run, tearing a ligament in his hand that required surgery and ended his campaign prematurely. Augie Ojeda stood in, and did a sterling job down the stretch and in the playoffs, batting .333 after taking over, and .316 in the post-season. The following year, Hudson's seasopn was again terminated by a freak injury. He dislocated his left wrist in August, when trying to snare an errant throw, having it bent back by the base-runner; it needed another operation to fix it.

In the light of Hill's contract, interesting to note that before the 2008 season, Hudson turned down a four-year, $29 million contract offer from the D-backs, instead requesting a mind-boggling $60 million deal over five years. When no agreement was reached on a long-term deal, a single-year contract was agreed and he walked at the end of the year. However, he would certainly have been better off accepting the D-backs deal: as it turned out, he ended up earniny more than $10 million less than our offer over 2008-11, with four different teams.

2009 saw the arrival of Felipe Lopez as a replacement for O-Dawg, but he was traded to the Brewers in a July deal - he also tied for the major-league lead in errors that season. After his departure, a three-headed beast involving Ryan Roberts, Ojeda and Rusty Ryal took over, but another new face gave Arizona their third different Opening Day second baseman in as many years in 2010. Kelly Johnson was the new incumbent, coming to Arizona after having been non-tendered by the Braves. Unlike his predecessors, he made it through to the end of the season, starting 146 games, and hitting .284 with a 26 homers, to put him among the league leaders for offense at second.

2011 was much less successful: while he still hit 18 home-runs in 114 games, Johnson batted barely above the Uecker Line, hitting .209, and was dealt to the Blue Jays on August 23, in exchange for John McDonald and Toronto's under-performing second-baseman, Aaron Hill. The new arrival promptly tore it up in the desert, hitting .315 in 33 games, before adding an .879 OPS in that year's Divisional Series against Milwaukee. He was re-signed that winter, to a two-year, $11 million deal, though there were doubt as to whether he could reproduce his success over an entire season.

Any such doubts were extinguished by a thoroughly-impressive 2012, which saw Hill reach the .300 mark, hammer 26 home-runs and become the first player since Babe Herman in 1931 to hit for the cycle twice in a single season. He was unjustly overlooked for the All-Star Game, but did pick up an MVP nod, won the Silver Slugger and - probably the highest honor of all - was named 2012 MVP by the SnakePit electorate, obtaining 60% of all votes. As we recorded on Friday, he is now signed through 2016, and fingers crossed, we'll get to extend that dark red block several more columns to the right before he's done with the Diamondbacks.