Yesterday, Steve Gilbert came up with a list of 10 questions for the Diamondbacks next year. While undeniably good issues, I've got a few more....

Share All sharing options for: 10 more questions the D-backs face in 2014

1. How much of a leash for KT and Gibby?

It seems clear that this year is a make or break one for both me, with Ken Kendrick's with-holding of the contract option years a very pointed message that results have not been as hoped. If there's a slow start - and the team was eight games below .500 after June 22 this season - Kendrick might not wait before pulling the trigger on what could well be a double-barreled termination, as with Josh Byrnes and A.J. Hinch.

2. Will the bullpen improve?

Gilbert does ask who will be the closer, but the problem last year wasn't just there: only 11 of our league-leading 29 blown saves actually came in the ninth inning. So it's more a need for our pitchers overall to be more effective in high-leverage situations. In those this year, seven NL teams had an sOPS+ below 100, i.e. pitched better than league average, including all five that made the playoffs. Arizona? Not so much, at 108, 11th-best.

3. Which Martin Prado will show up?

We don't want to see the April one, who hit .217/.266/.348, for a .614 OPS. The other one, the Prado that batted .298 the rest of the way - yeah, that's the one we need to be getting, from the moment we step on to the hallowed turf of the Sydney Cricket Ground in March. For reasons noted above, the Diamondbacks can ill-afford a cold start, and a productive Martin will be key in avoiding that.

4. Will our outfield defense continue to shine?

This was an area where the team was the best in the league in 2013. We'll still have Gerardo Parra and A.J. Pollock, but likely won't have the luxury of being able to use the former as a late-inning defensive replacement for Jason Kubel. With Mark Trumbo basically a novice in left-field, the potential for hilarity is there. I've a feeling the map of territory covered by our outfielders in 2014 might end up looking roughly like this. 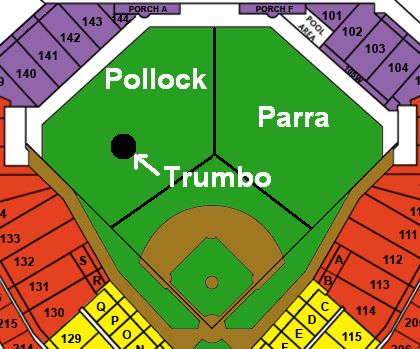 5. Are home-runs the new strikeouts?

By which I mean, a factor that isn't perhaps as important as it might appear. There's no doubt that the arrival of Trumbo will help the D-backs have more homers: if he doesn't hit at least thirty, I'll want to know the reason why. However, in 2013, Trumbo had the lowest OBP (.294) of anyone with that many home-runs (34) since Joe Carter for the 1989 Indians. So, to what extent he will help the offense overall, remains to be seen.

There was a significant chunk of last year, where Wade Miley looked like he might be another victim of our sophomore starter slump, following Barry Enright and Josh Collmenter. Through 15 starts, he had a 4.70 ERA and a K:BB ratio of barely two, down from 3.9 last year. He turned the ERA around in the second half, but with a low K-rate (6.5 compared to NL starter average of 7.2), needs to walk fewer people to have sustained success.

At this time last year, it appeared we had our long-term center-fielder in Adam Eaton, and A.J. Pollock was not even in John Sickels' top 10 D-backs prospects. Now, if Spanky's going to be anyone's LTCF, it's the White Sox's, with the team throwing their weight behind Pollock instead. For someone seen by Sickels as a "fourth outfielder" 12 months ago, it's a big vote of confidence, and he'll need to continue to perform as he did in 2013.

8. Will we break the lefty-curse?

During the past decade, 104 left-handed relievers in the NL have had seasons throwing 50 or more innings, with an ERA+ better than 100. Arizona has one of them: Clay Zavada in 2009. For a while it looked like Matt Reynolds might break the streak, but his arm fell off mid-way through 2013, and 2014 isn't looking good for him either. Joe Thatcher will try to defy the odds next year, but will need to pitch better for us, than he did this time around.

Duncan's reputation certainly precedes him, and luring him out of semi-retirement, even as an "adviser" is a feather in the cap of the team. It'll be interesting to see what, if any, effect he and new pitching coach Mike Harkey have on the staff this season. The team's ERA+ dipped from 104 to 98 in 2013, which isn't a good thing, and reversing that trend is almost a necessity if we're to compete for the division.

10. Is Daniel Hudson going to be back?

If you haven't been following Hudson on Twitter, it'd be easy to forget he still continues his battle to return from not one, but two Tommy John surgeries. Yesterday was actually the 18-month anniversary of his last major-league appearance, and we're likely at least another six months from seeing him again as a D-back. This particular situation is almost uncharted medical territory, so let's keep our fingers crossed he's our comeback player of 2014.