Trumbo Has a Hole in His Bat

Get used to seeing pitches low and away, Diamondbacks fans.

Share All sharing options for: Trumbo Has a Hole in His Bat

When I opened up this window, I was hoping to dig through the numbers and find something positive to say about Mark Trumbo's skill-set beyond the fact that he has tons of home run threat. Instead, I found myself looking at his HitFX data and felt the darkness close around me. 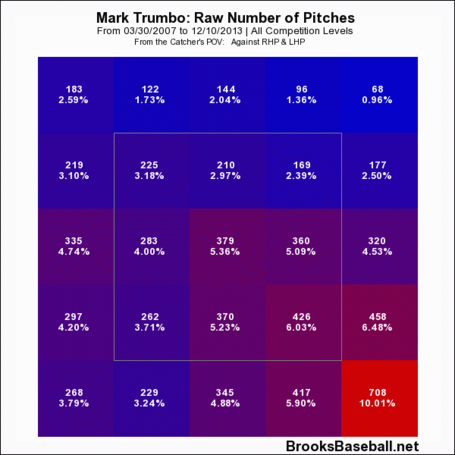 As you can see above, Trumbo is pitched in the lower right four squares about 30% of the time. This isn't uncommon for right handers, as it can be a trouble spot as pitches move out of the optimal hit zone. Where we run into trouble is the next is what Trumbo does with that part of the zone.

I used Carlos Quentin as a comp, because Baseball Reference listed him as the closest through age 27 and I'm nothing if not a follower. Quentin sees less in that lower right quadrant, but not significantly (28.51% vs 28.24%). Where the two diverge is what they do with this part of the zone. 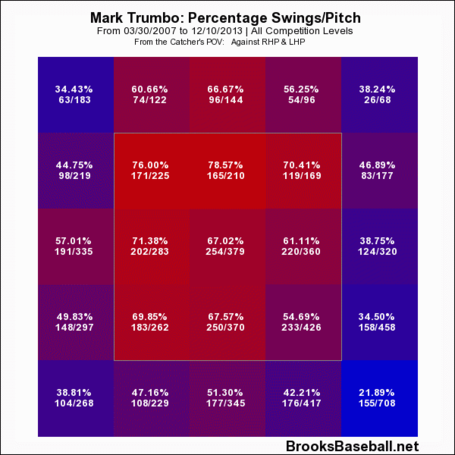 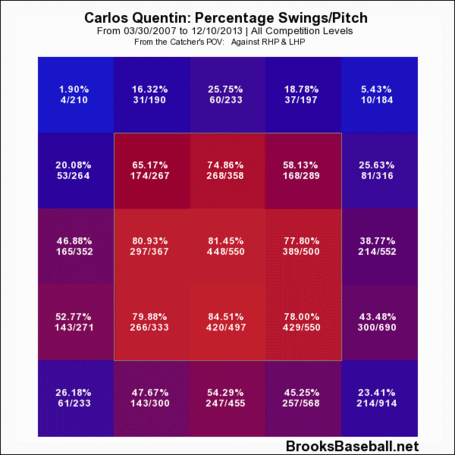 Quentin consistently swings more in that bottom right 4 squares. But maybe that just means he's too aggressive, and that Trumbo is more effective with that difficult zone? Not quite: 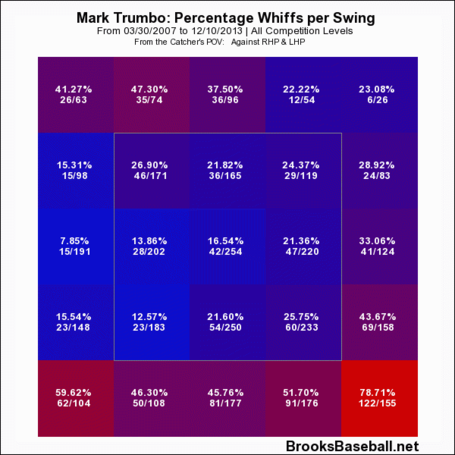 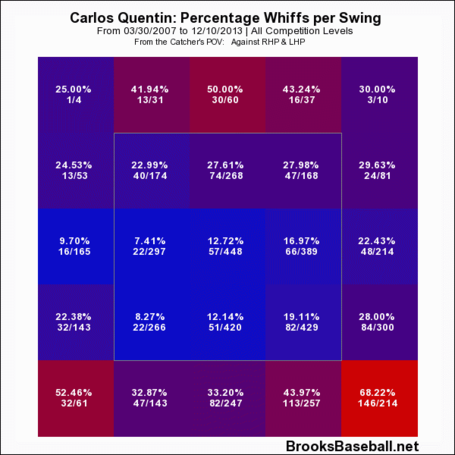 Trumbo swings and misses more consistently than Quentin, and even when he gets the bat on the ball it does nothing. Trumbo slugs .091 in the bottom right square, compared to Quentin's marginally better .116.

Right-handed batters have trouble with this part of the zone across the board (even Mike Trout and Miguel Cabrera, two of the best right-handers currently playing, have trouble with that lowest square), so that Trumbo struggles here as well isn't too surprising. The difference for Arizona new acquisition, though, is that he sees this zone higher than his comps or even the top baseline of Cabrera.

The reason why should be obvious: hitters that show they can hit in that range, even if it's just slightly better than the crowd, aren't going to be pitched there as often. That Trumbo really can't handle it in anyway means he's going to to see a full 10% of pitches in the lowest square.

I don't pile on the poor guy; I'm sure's very nice, and I certainly hope he does well now that he's a Diamondback. I just can't promise I won't be really frustrated every time I see a low and away pitch. And I know I'm going to see a ton.