Things to be thankful for: Diamondbacks home-runs

There's nothing quite like watching your team hit a home-run. The Diamondbacks did it 130 times this year. Let's break down those, and re-live some of the most memorable examples of the season.

Share All sharing options for: Things to be thankful for: Diamondbacks home-runs

Paul Goldschmidt hit 27.7% of all home-runs this season, the highest percentage by one player in the National League - though one suspects if Giancarlo Stanton had played all year for Miami, instead of only 116 games, he might have been higher still, instead of second, at 25.3%. Goldschmidt's was also the top mark in the National League since Matt Kemp hit a full one-third of the Dodgers' homers in 2011. Arizona came out of the gate fast, posting their top month form home-runs in April, with 28; their worst was September, with 17. While they did hit more long-balls at home, the Chase Field effect didn't help too much, with the split 68-62.

Rockies' pitchers allowed most, with 16, ahead of the Padres (13) and Dodgers (12). We only managed nine against San Francisco, the same as against Cincinnati - the latter clearly in a lot fewer contests. However, the single most-tortured pitcher in the majors by Arizona hitters was also a Giant. Matt Cain was the only man to allow more than three home-runs to us all year: indeed, he gave up three home-runs in one inning on April 29, to Jason Kubel, Eric Chavez and Martin Prado, in the fourth. Outside of Chase, and perhaps surprisingly, Petco Park and Dodgers Stadium were the most popular parks, both finishing the year ahead of Coors.

"When", meaning both within the game and within the at-bat. The highest number (21) came in the opening frame, but that was followed immediately by the lowest number (8) in the second inning. Overall, the split was fairly even across the thirds: 41 through the front three innings, than 46 in the fourth until the sixth, and 43 from the seventh inning on. Most (21) also came on the first pitch of the at-bat, and with 1-0 (19) and 1-1 (18) also popular counts, we definitely liked swinging early, with a total of 80 home-runs in the first three pitches. At the other end, we had three on the tenth pitch or later, all by Goldschmidt, peaking with the 13-pitch bomb nominated as a Play of the Year. 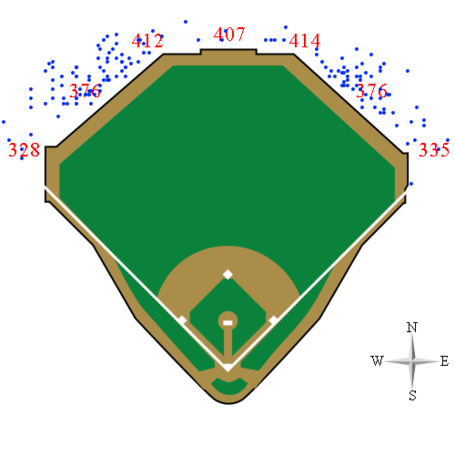 If you're looking to snag a home-run ball at Chase - either to keep, if it's one of ours, or throw back, if it's the opposition - the chart above shows you where they all went this season, for both teams. It's a pretty good spread, though not many appear to be hit to dead-center; you likely wouldn't get those anyway, since they'd bounce off the batter's eye. For Arizona homers, left to left-center saw the majority (72), though right (34) was not bad either. The Diamondbacks did seem to be a strong collection of pull-hitters, with only 11 going to the opposite field: Goldzilla had six of those, with two each for Chavez and Gerardo Parra, and one for Kubel.

And the envelopes please...

The Golden Tsar Bomba. No prizes for guessing who wins this one, considering Goldschmidt was responsible for six of the nine longest balls off Arizona bats this season, including a clean sweep of the podium positions. The bronze went to his 442-foot blast, off Carlos Marmol at Wrigley, the longest away from Chase by a D-back. The silver was the destruction wreaked against former Arizona pitcher Chad Qualls, estimated at 445 feet. And the longest home-run for your 2013 Diamondbacks came off Reds' Curtis Partch on June 21: it went 447 feet, and is under investigation as a possible breach of the Eighth Amendment on the poor rookie.

Honorable mention: Miguel Montero's 437 footer was the longest for Arizona this year by someone not named "Paul". a 437 foot shot at Turner Field.

The "Hello, I must be going" award. The home-run which left the park in the biggest hurry, also goes to Goldie, and came against the Cubs at Chase Field on July 24. Some home-runs are moon-shots, but this one was more like a Sidewinder missile, with an estimated speed off the bat of a season-high 111.5 miles per hour. This one never reached more than 50 feet off the ground as it made it's way into the front row, completing its journey in about 3.5 seconds, which works out at an average speed that would be illegal on most valley freeways for Miggy's Ferrari. Not often a home-run is making its way back to the infield before the hitter reaches second-base!

Honorable mention: Didi's homer off Yu Darvish was almost as fast off the bat (110.5 mph) and nearly as much a screaming liner, with an apex of less than sixty feet.

The "They all look the same in the scorebook" Vase belongs to Cody Ross, for proving that it isn't necessarily how far you hit the ball that matters, it occasionally can be where you hit it. And not just in a "hit it where they ain't" kinda way, but more, which city you are located. Witness the following, which Ross delivered on August 2nd. It took a replay, but it eventually stood as called. OnlineHitTracker.com estimates that in 28 of the 30 major-league stadia, it would not have been a home-run. But the good news for Cody is, he was playing that night in Fenway Park, which was one of the other two. Probably explains the prayerful position!

Honorable mention: this wall-scraper from Eric Chavez, which at 337 feet was the shortest of the 2013 campaign by a Diamondback. But it would still have been a homer in two-thirds of parks.

The Johnny Estrada Cup for meaningless stats padding. No homer is truly worthless, but there are certainly some which are the "Is Diet Pepsi alright?" of long balls. Baseball-Reference.com shows six home-runs this year for Arizona as not having moved the needle at all in terms of Win Probability, but they only show it to the nearest percentage point. Switching over to Fangraphs, which works to a finer degree of precision, we find five of those were actually worth between +0.1% and +0.4%. The only one worth a genuine 0.0% came in the ninth inning at PNC Park, padding a seven-run lead to ten. However, it did bring Goldschmidt to 30 homers for the first time ever.

Counterpoint: June 7 vs. Giants. +66.2%. I was sitting next to an irritatingly-smug Giants fan when Paul got hold of this one. Moment of the season for me.