This was originally about how the Diamondbacks' 2014 payroll would likely be $100 million or so. Then I suddenly realized how much it had increased, in only three seasons.

Share All sharing options for: The Diamondbacks' Ballooning Payroll

According to USA Today, the Diamondbacks Opening Day Salary in 2011 was $53,639,833. That team won 94 games and came within the thickness of a FedEx envelope from going to the National League Championship Series. The following year, payroll increased by 38%, but these larger checks were not reflected in the standings. While you can argue they were somewhat unlucky, the 2012 version of the team finished exactly even, with an 81-81 record. Undaunted, ownership increased salaries by a further 15% this year... Only to finish with exactly the same mark, and arguably, worse underlying numbers, such as run differential.

Next year, all the indications are, the team will see another increase, well into double-digits. They will likely spend $100 million or more on payroll, and it's possible (although not perhaps likely) that the Diamondbacks could end up spending twice as much as they did a mere three years ago. Will that be reflected in the standings? Ken Kendrick and his co-owners certainly would like to think that'll be the case, but the results of the past couple of seasons show it's certainly not a guarantee. This campaign's payroll was almost two-thirds (66.1%) up on that of two years previously, but the results were certainly not comparable.

Some of the increase is due to overall inflation, but the overall increase in player compensation is only about 4% per year or so. This can be seen in the way the Diamondbacks' rank among major-league teams has also increased over the past few seasons. The 2013 team were 17th in payroll, which is eight places above where the 2011 Arizona team were ranked. It's not possible yet to say where the 2014 one will place: it may beat the 2002 franchise for the greatest gross payroll (that one cost almost $103 million), but it certainly won't match that incarnation's ranking; only the Rangers, Red Sox and Yankees spent more than the D-backs in 2002.

Still, I was curious to see how our costs had become so high so fast, and decided to break down the numbers a bit further. The chart below breaks down those numbers, by listing the prices of the players that season who were earning significantly more than league minimum [the cutoff was around $700K]. I've arranged the players more or less by cost, putting the highest paid as the starting eight, whether or not that was actually the case [we probably wouldn't have made the post-season in 2011 if Nady and Mora had been everyday players!]. All costs are in millions, exclude buyouts and are to two decimal places. After all, what's an odd ten thousand dollars between friends?

Obviously, the 2014 chart remains incomplete. Some of the above are arbitration estimates, and while some of the open roster spots will indeed be filled for league minimum, with the likes of Adam Eaton and Didi Gregorius, it's almost certain that others will be better-paid. Replacing (or re-signing) the likes of Wil Nieves and Eric Chavez, is not going to involve the spare change off Ken Kendrick's night-stand. There may also be other moves in the days ahead, for example, if Kevin Towers looks to fulfill Kendrick's interest in adding more home-runs to the roster, saying "I think we're going to try and figure out what we can do to maybe put more power in the lineup."

A few other thoughts. Damn, that 2011 roster was economical. The most-expensive player was Kelly Johnson, at $5.85 million. There will be, at the current time, seven players on the 2014 Diamondbacks squad who will be earning more money than that. In particular, the entire bullpen then cost not much over $8 million, with the other five relievers on the Opening Day roster all minimum-men: David Hernandez, Juan Gutierrez, Sam Demel, Kam Mickolio and Joe Paterson. While Towers has certainly improved our relief ERA since taking over, it hasn't been cheap: this year's model will cost around $22 million, and that excludes the Marlins' contribution to Bell.

We also see the way players increase in cost with time, without necessarily getting any better. There are only two survivors from the non-minimum 2011 roster: Miguel Montero and J.J. Putz, who next season will earn 312% and 175% of their salaries from three years ago. Will their performances be 312% and 175% as good? I'm inclined to doubt it. It would be interesting to plot player performance against age, and compare that graph to player salary versus age: you would probably find that production starts to drop some way before cost does. Finding that spot, and letting someone else pay for a player's declining years, is a key skill in GMing.

For those who found themselves slipping into unconsciousness as a defensive measure when faced with the table above, we can present the data in a more visual format. Look! Pretty colors! I divided our 25-man roster up into five bands: minimum (or close to); above minimum and up to $2 million; between $2 and $5 million; above $5 but below $10 million; and finally, everyone earning eight figures or more. The chart below shows these, colored blue, orange, yellow, green and red as appropriate: we start with 2011 nearest the middle, and work out from there, to the expected 2014 roster on the outside. 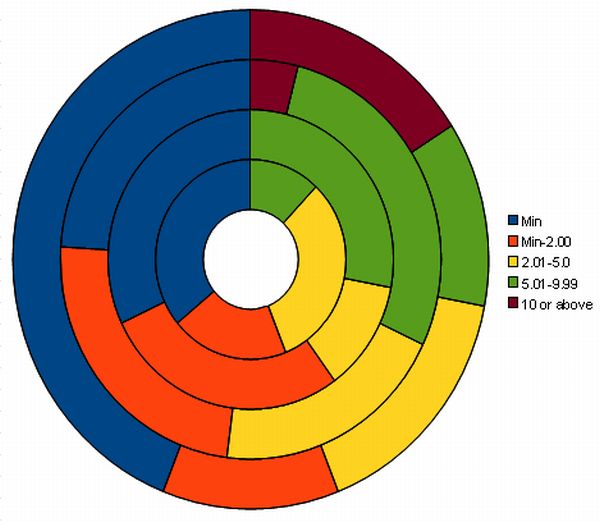 As noted above, the blue area for next year is exaggerated, due to the significant number of empty slots which need to be filled. But you can still see the trend: a general decrease in the number of minimum salary players, and an explosion at the upper end of the pay spectrum. This season, Montero became our first $10 million man since we stopped paying Eric Byrnes to play beer-league softball; that'll buy Miggy a lot of tacos (or even a lot of Ferraris). Next year, he'll be joined by Aaron Hill, Martin Prado and Brandon McCarthy, to become the first time we've had four on our roster. It's perhaps worth going through team history to list all the players:

The historical results have been kinda variable. Hard to argue that the Big Unit, at least in his first stint here, wasn't worth every penny, and the same goes for Schilling. However, the rest range from marginal down, and sobering to see how some have actually delivered at a level far short of being commensurate with their salary. The nightmare scenario was a year like 2006, where Green and Gonzalez combined for 0.2 bWAR, at a cost of almost $21 million. If anything like that happens to the Diamondbacks in 2014, I sincerely doubt we'll be seeing any further payroll increase being funded for the season beyond that.