What are the chances of Arizona seeing MVPaul Goldschmidt?

Ballots for the National League MVP voting have to be turned in on Sunday, and the Diamondbacks have one of this year's leading candidates, in Paul Goldschmidt. What are his chances of becoming the first Arizona player to win the award?

Share All sharing options for: What are the chances of Arizona seeing MVPaul Goldschmidt?

Let's start off by the basic numbers. Below, are the position players who finished in the top 10, either in fWAR or bWAR, for the season just finished. The chart shows what they scored in both, and is ordered by the average of the two scores (the "WAR" column).

In favor of Goldschmidt

WAR does take position into account. MVP balloting, not nearly so much. If you look at the recipients of the award, they are mostly corner outfielders and first-basemen. Sure, other positions are sprinkled in for variety, such as St. Buster last season; but he was the first NL catcher to win for 40 years. Defense, while not exactly a weak suit for Goldschmidt, is something rarely considered either - that's what they have the Gold Gloves for, innit? It's offense that matters: 16 of the past 17 years, the award has gone to a hitter with an OPS above .950. There's only one of those on the ballot this season - and it's not McCutchen, who hit 42 OPS points worse than last year, when he finished 3rd.

Goldschmidt's main strength is in traditional numbers: led the league in RBI, tied for the lead in home-runs, and hit over .300. It's not quite the Triple Crown, but it's a solid combination of old-school stats and of the 18 players since 1977 to do the HR/RBI double, most did win MVP that year. If you want something more sabermetric to support his candidacy, you won't find it in WAR, in part for the position adjustment noted above. But WAR doesn't necessarily equate to MVP success either: in both 2010 and 2011, the award didn't go to the player with the highest bWAR or fWAR: Joey Votto beat out Albert Pujols, and Ryan Braun (yuk) won ahead of Matt Kemp.

Win Probability does support Goldschmidt's claim, as shown in the graph below, part of the nice chart sent out by the D-backs to back his candidacy. He added 1.3 more wins to his team than any of the other leading nominees, and his clutchiness was impeccable. He led the league in go-ahead RBI (37) and home-runs (20), and was the only NL hitter with three walk-off bombs this season. And this is cool: "Goldschmidt fell one walk shy of joining Prince Fielder (2009), Frank Thomas (1993), Jimmie Foxx (1932) and Lou Gehrig (1927) as the only first basemen with at least 35 homers, 120 RBI, 100 runs scored and 100 walks in their 25-year-old season or younger." 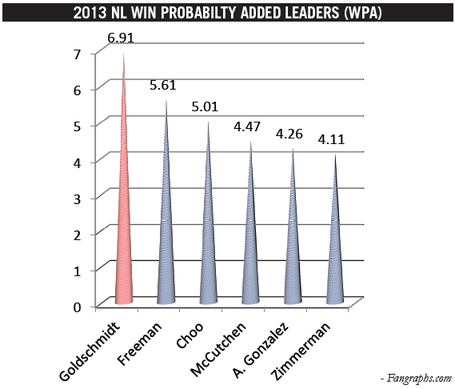 The obvious knock is that Goldschmidt's "value" to his team was the difference between coming second in the West, and finishing fourth. Admittedly, given McCutchen's Pirates finished eight games clear of the Nationals, you could argue that they'd have made the playoffs with or without him, but there's no denying that the D-backs' failure to finish above .500 is a significant blow to Goldschmidt's chances. Pujols may have won on a fourth-placed team in 2008, but his Cardinals finished at 86 victories. No National League MVP has come from a team without a winning record, since Andre Dawson on the 76-85 Cubs in 1987. While clearly not Goldie's fault, it's still a huge hurdle.

There are probably some other points against Goldschmidt, but I really can't think of them right now. :)

It's a perpetual argument. Will pitchers make any impact? The two obvious candidates are Clayton Kershaw (7.2 WAR) and Adam Wainwright (6,2). perhaps with a sprinkling of Cliff Lee (6.2) and Jose Fernandez (5.2). However, fair or not, there is an undeniable bias against pitchers in the upper echelon of MVP voting: they are seen to have the Cy Young award to recognize their achievements. This results in them being discounted, even if their value - or, at least, value as measured by WAR - is as good as any position player. No pitcher has even finished in the top five for NL MVP since 1995, when Greg Maddux went 19-2 with a 1.63 ERA...and still came third, behind Barry Larkin.

I've no doubt Kershaw will get top five votes from some writers, but will he finish there. Wainwright should receive a few, more token mentions as well, though since you could argue he's only the third MVP on his team, that could hurt him. And let's not forget about Braves' closer Craig Kimbrel, who may not have the WAR but became the first NL reliever since Eric Gagne in 2003 to reach 50 saves. Kimbrel was the highest-ranked pitcher in last year's MVP voting, finishing eighth: his ERA was better then, but he had fewer saves. Gagne came sixth after his 50-save campaign, and that was after a perfect season, so Kimbrel will likely be lower.