Rise of the Corbin

From having to fight for a job in spring training to appearing in the All-Star Game. Safe to say 2013 was quite a ride for young D-backs prospect, Patrick Corbin.

Share All sharing options for: Rise of the Corbin

Corbin lost his rookie status, having pitcher 107 innings in 2012. Most of those were as a starter, but the results were inconsistent: he went 6-8 with a 4.54 ERA, but finished the year on a decent note, allowing one run over seven innings against the Colorado Rockies. Those numbers were reflected in pre-season projections that generally had Corbin round about the 4.20 to 4.30 ERA - the overall consensus came in at 4.27. But he was far from certain of a place in the Diamondbacks rotation: coming in to spring training, he was in a three-way fight for the fifth spot, going up against Randall Delgado and Tyler Skaggs

Popular opinion on the SnakePit did seem to favor Corbin. When we covered the battle at the start of spring, I wrote that Corbin was "the most likely to claim the fifth spot," and the associated poll saw him come out on top, getting 49% of the vote. He certainly didn't seem to be stressing out over competing with his friend Skaggs, who had been a team-mate for much of Corbin's minor-league career. He told Steve Gilbert, "We've been together for all these years, and every time we've gone out there we'd always try to have a better game than the other, and that's just how it is. We joke about it and have a good time with it."

But it was Skaggs who was the first man voted off the island, being optioned to Triple-A on March 18, after allowing 11 earned runs in 12 innings. The battle between Delgado and Corbin went almost down to the wire, though the latter's numbers were more impressive, and seemed to get better as the Cactus League wore on. On March 29, Patrick threw six shutout innings of two-hit ball against Cincinnati, and that secured his place. The following day, the announcement was made:

No-one really paid much attention to Corbin in April, even though he went undefeated in five starts, with an ERA of 1.91. But as May wore on, and he remained undefeated with a stellar ERA below two, the national media began to pay some attention. After improving to 5-0 against the Phillies, MLB.com wrote "A little more than a month into the season, the 23-year-old New York native already has dominated his childhood team at Yankee Stadium, outdueled Cy Young Award winner Clayton Kershaw of the Dodgers and, with another methodically impressive performance Thursday night, defeated World Series MVP Cole Hamels."

It was Corbin's mastery of the Colorado Rockies at Coors Field which really made people sit up and take notice, as he ran his record to 7-0, and lowered his ERA to an astonishing 1.44. Patrick allowed one run, becoming only the fourth pitcher since 1996 to hold Colorado to three hits over a complete game at Coors. He struck out 10, his first double-digit K appearance, and it was also his first complete-game in the major-leagues. There was effusive praise for Corbin from Rockies' veteran Todd Helton who told Jody Jackson that Corbin had the best slider he had ever seen - high praise indeed, from a man who played against the Big Unit in his prime.

Corbin was named National League Pitcher of the Month in May, winning every one of his five starts and posting a 1.53 ERA. The success kept on coming - at least through the first outing of June, which saw Corbin reach a 9-0 record, becoming the second Diamondback pitcher to start off the season that way, following Brandon Webb in 2008. He also opened the season with nine consecutive starts of six innings or more, and two runs or less - only one other pitcher in the live-ball era (Ubaldo Jimenez) has matched that feat.

After that first outing, June proved trickier for Corbin. While ended the month still undefeated, he also didn't add any more wins, that 10th victory proving elusive. Despite a 2.55 ERA over his last five starts, Corbin was stuck with the no-decision each time, and lost his first decision against the Mets on July 2, New York scoring seven in the seventh. However, four days later, it was announced that he and Paul Goldschmidt would represent the Diamondbacks at the 2013 All-Star Game, to be held at Citi Field. For a kid born in upstate New York, it was fitting. He said, "I didn't know what to think... I never thought in a million years that I would be an All-Star or even play professional baseball."

Corbin came in out of the bullpen to face the heart of the American League order in the fourth inning, going up against Miguel Cabrera, Chris Davis, Jose Bautista and David Ortiz. Cabrera doubled and came home to score on Bautista's sacrifice fly, but Patrick got Big Papi to hit into an inning-ending double-play. The run allowed did lead to Corbin being charged with the loss, but his enthusiasm was undiminshed. "It was a great experience, something I'll never forget in my first All-Star Game," he said afterward. "It was a great lineup -- wow. It was just a neat experience that they let me go out there and pitch in that inning. It's something I'll remember for the rest of my life."

The day after his selection, Corbin finally got that tenth victory, at the seventh attempt, and another W took him to a record of 11-1 at the break  Among NL starters to that point, Corbin was ranked among the top ten in win percentage, wins, ERA, innings pitched, WHIP and opponent batting average. After the break, Corbin took up where he left off, continuing a streak of four consecutive starts with one run allowed. But thereafter, Patrick seemed to lose his mojo. Over the 11 starts he made in August and September, he went 2-6 with an ERA above six.

Part of that may be BABIP regression (it was .360 down the stretch, compared to .250 to that point), but a bloated line-drive percentage (29%) over that time suggests a lot of heavy contact. There was significant discussion about whether Corbin should be shut down at the end of the season, but the team didn't feel the need. Said Gibson, "At this point, we have no reason to believe something is wrong or something is going to be wrong," and he believed the cause was Corbin not executing his pitches properly. Gibby did admit fatigue could been an issue: "He doesn't have much left in his tank, but neither does anybody else." 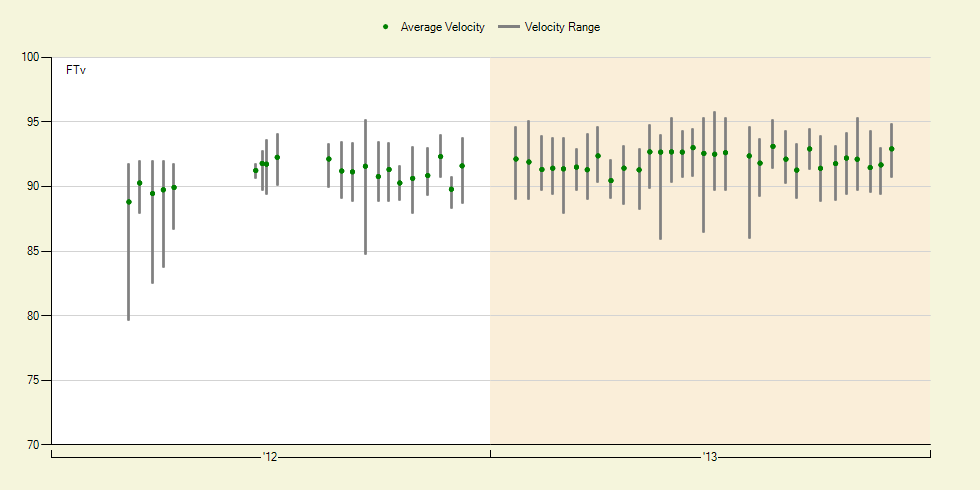 There is evidence to support the "execution" theory, with his fastball velocity, as charted above, sustaining itself compared to what it was earlier in the year. But the theory is that Corbin had to work harder to sustain that velocity, leading to decreased movement and the ability to spot his pitches. After one September starts, Gibby observed "When he went to his glove side, he didn’t get many strikes on the inside corner. His breaking ball, slider had a hard time getting it down and in. When you think of the really good games that he’s pitched, he struck everybody out on sliders that are glove side and they’re breaking sharply down and in. He just didn’t get it there."

Speaking after his final start, Corbin also downplayed fatigue: "I feel fine. I wish I could go out and pitch again to end on a good note... This last month has been difficult for me, and it's something I want to get over. But at the end of the season when I get home, I'll look back and try to get better to make sure this doesn't happen next year." But team-mate Miguel Montero was still positively gushing: "He’s one of the top 10 pitchers in the National League. At that age, he’s only going to get better and get stronger. He’s done a better job than we all expected. We weren’t expecting that type of (performance). He was amazing."

The secret to his success

What made Corbin so much more effective this year than he was last? Part of it appears to be sheer mass. In July, pitching coach Charles Nagy observed, "You look at Patrick and you see he's still growing. He's still filling out. He's still maturing. You watch that and realize that he still might have some more in the tank." His fastball went from 90.9 mph to 92.1 this year, with a similar increase on his others. Corbin noted a difference: "Your pitches might be a little bit harder, a little bit sharper and have a little bit more movement. It's the same exact same I've been throwing every year, but just because I am throwing maybe a little bit harder, there might be a little more movement."

If there's one weapon in his arsenal which proved particularly venomous, it was the one noted by Helton: Corbin's slider. Analyzing that pitch in May, Jeff Sullivan of Fangraphs wrote, "Corbin has been burying the slider in and beyond the corner much more regularly. That suggests improved release-point consistency and improved snap," and also noted that it was a rarity among sliders, one capable of fooling both left- and right-handed batters. That was demonstrated particularly against Colorado, where all but one of his ten strikeouts came on the slider, most of them on pitches out of the strike-zone.

Increasing its effectiveness, Corbin was also almost working ahead in the count, which is a huge help to any hurler. He threw strike one 70% of the time, the most among qualifying pitchers in the NL. That's important, because after falling behind like that, major-league batters hit at only a .223 average this season, with a .601 OPS. Corbin was even better than that: in PAs after an 0-1 count, hitters were held to a line of .193/.239/.278 against him, with a K:BB ratio of 136:23. Of course, maybe we just have to thank Corbin's mouthguard. :)

"He’s had a heck of a season. He’s only going to get better and get stronger. He was amazing. -Miguel Montero

Is what Corbin did sustainable? Over the entire season, I'm inclined to say yes. I think the "real" Patrick Corbin is somewhere between the unstoppable beast of the first-half and the replacement level one we saw late on. That's probably stating the bleedin' obvious [since that range covers 99% of pitchers!], but his final ERA of 3.41 was almost exactly in line with both his FIP (3.43) and xFIP (3.48) - those are numbers which have been shown to correlate well with future performance.

I think we will see Corbin at, or possibly slightly better than, those numbers in 2014. He turned 24 around the All-Star break, so there's probably a little more room for improvement due to age and experience, and he should be better able to withstand the rigors of a long season - this was his first full season in the majors, remember. One thing seems virtually certain: he won't have to compete for his job when spring training rolls around next year! And if you want to know more about the man behind the numbers, here's the Fox Sports Arizona Cup of Coffee segment, in which Steve Berthiaume talks to Corbin.