The Glory that was Goldschmidt

Paul Goldschmidt had one of the best seasons in Diamondbacks history. Indeed, you can make a case that it was the second-best ever by any Arizona position player. Let's look in some more depth at the remarkable season, by this remarkable man.

Share All sharing options for: The Glory that was Goldschmidt

Among the all-time greats

We'll start with the 10 greatest season in D-backs position player history, as dictated by bWAR [fWAR differs slightly in its assessment, though not much, putting Goldie's season third, behind Gonzo partying like it was 1999]:

Obviously, offensively, Luis's raw numbers are far and away the best. But a couple of factors make the WAR gap a lot smaller. Firstly, the game has tilted firmly towards pitching since 2001 (we'll take the reasons as read here!). This stands out particularly in home-runs. Gonzalez's 57 was only good enough for third in the National League; Goldschmidt had more than 20 fewer, but still tied for the HR crown. All told, league OPS was down over 50 points this season, to the lowest it has been since 1992 and K:BB ratio the highest it has been for 130 years. A .952 OPS now leads the league: it's worth a lot more, than it would have been in 2001, when 23 batters were higher.

The other factor is that WAR also includes defense and base-running, and these are areas where Goldschmidt performed very well. His 15 stolen-bases not only led the team, they were also the most in the major leagues by any first-baseman: he and Derek Lee are the only 1B since 2001, to have consecutive seasons stealing 15 bags. His defense is also rock-solid, as we discussed yesterday: while Gonzalez was a solid defender during his younger years, by the time 2001 came, we were already seeing glimpses of a descent into the madness and carnage which was his left-field play, by the end of his time with Arizona, where he practically needed a cut-off man to reach third.

The expected numbers above, are a consensus from the stats by a number of systems, including CAIRO, Steamer and ZIPS. It's startling to realize how relatively-modest their expectations were for Goldschmidt, before the season began. I mean, .275 with 25 home-runs, driving in 90? He'd surpassed the latter two figures as early as August 9, getting his 91st RBI of the year on that day, courtesy of his 27th bomb. I am kinda impressed how close the projections were when it came to double, triples, stolen-bases and strikeouts, though since he had 72 more at-bats than they expected, it may be more good fortune than judgment!

Low though they seem in hindsight, the overall projections are not unreasonable, considering that, over 193 games in the majors to that point, Paul had 28 home-runs and a line of .278/.353/.487. You might expect a little extra on for a player entering his prime years, and likely now fully accustomed to the big leagues. But if we'd got something in line with the expected numbers, I doubt there would have been many complaints. For him to surpass it by over 100 OPS points, would have seemed like irrational fan optimism before the season began.

The very model of consistency

"I think this is what he is — a platoon guy who destroys left-handed pitching (and Tim Lincecum)."-a pundit

Yeah. About that... For one of the outstanding features of Goldschmidt's campaign was his absolute equal-opportunity program of offense. Home or away, first-half or second-half and, of course, against left-handed or right-handed pitching: Goldschmidt just kept hitting. Here are a selection of his splits, so you can see what I mean:

I note he actually had reverse platoon splits, hitting right-handers better - and that was without even doing much against Lincecum this year (a pair of singles in six at-bats for a .667 OPS). This year, Goldzilla turned his sights on some other targets instead: particularly brutalized were Hyun-Jin Ryu (7-for-14 with a HR and two doubles) and Yovani Gallardo (4-for-4 with two walks). You can't even argue Paul benefited significantly from playing at Chase (something you could about Justin Upton, who had a .937 OPS at Chase in his time with Arizona, but only .731 elsewhere), with very similar numbers here and elsewhere.

And his numbers were just about consistently good throughout the season, his worst calendar month being June, with an OPS which was still .828. Even when Goldschmidt was held homerless for 22 games during September and October, he was hitting and taking walks - he had an OPS of .864 over that time; damn impressive, given the zero home-runs included in the figure.

It may not be a repeatable skill, but if you needed a big hit in 2014, time and again, Goldschmidt came through. He had four of the eight biggest WP plate-appearances of the year for the D-backs, capped off with his three-run homer against Jeremy Affeldt of the Giants on June 7, worth +67%. Goldschmidt didn't just lead the team in WP, he virtually lapped everyone else: for the season, he was at +786%, eight times that of Cody Ross in second, all the way back on just 109%. Goldschmidt led the National League in go-ahead RBI with 37, including 20 go-ahead home-runs, tied for the lead in game-winning RBI (19) and led in late home-runs, with seven coming in the ninth inning or later.

And then there's the bombs

We'll be talking more about this down the road, when we cover the top home-runs of the year by a Diamondback - you won't be surprised to hear that this will heavily feature Goldschmidt in several categories. For now, I'll just point out that Goldschmidt was almost the definition of "power to all fields". The chart below, from hittrackeronline.com, shows the location of each of his 36 home-runs. You can hardly tell whether it belongs to a left-handed or right-handed hitter. 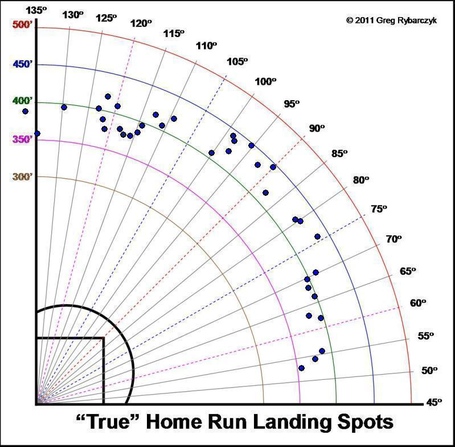 "Humble, humble, humble. He's the greatest teammate I've ever had. Everyone loves him in here." -Wade Miley

The certain pundit also snarkily said of Goldschmidt, "Kirk Gibson and GM Kevin Towers really seem to like his makeup, which counts for everything in Arizona these days." But, really, how can you not love Goldschmidt? This is a guy who, while putting up a MVP-caliber season, also found time to squeeze in enough online studying to complete his bachelor's degree in management, sitting with his laptop at hotels or on the team plane. "I worked hard for three years so I didn't want that to all be a waste... you want to be prepared for whatever's coming forward in the future."

This is the guy who, when teammates (and I'm virtually certain J.J. Putz was involved!) printed shirts with his picture and the slogan, "America's First Baseman," he begged them never to wear the shirts in public. "I'm not going to get mad at guys having fun, but I'm sure not going to wear it," he said. He and his wife have quietly been volunteering at Phoenix Children's Hospital for the past couple of years, a role which became more publicly-known with their fundraiser for the facility last month. It's one thing to have mad skills. But being the kind of person Goldschmidt is, is something which makes it even more of a pleasure to support him

Here's the Cup of Coffee program Fox Sports Arizona did with Goldschmidt earlier in the year: