After Kevin Towers' unexpected moves during last year's offseason, Left Field may have been the most, uh, "scrutinized" position on the team as 2012 began. Let's see how the position stacked up overall.

2012 Expectations: 13 months ago, our expectations were generally pretty straightforward. Gerardo Parra was a Gold Glove outfielder on a 94-win team. Also, he was only 24, and had just had a breakout offensive season while remaining under contract for the foreseeable future.

The options seemed to be either that his offense would take another step forward in 2012, and he would transform into one of the better outfielders in baseball, or that his offense would level off, and we would have the consolation prize of watching a 3-WAR outfielder make spectacular catches and gun down runners at the plate for the next few years. Either of those first two options was acceptable.

But as is his MO, Kevin Towers decided to pursue a third option: 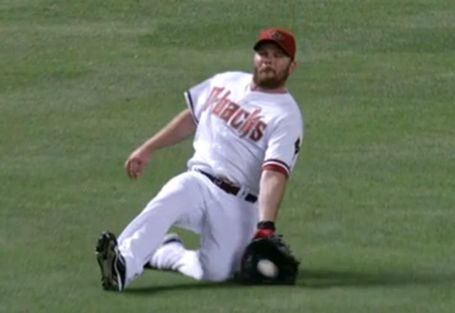 Look at that face, you guys. Who wouldn't love a face like th--. Oh, right.

The move was, uh, not well-received. And really, why would it be? Jason Kubel was 30, he had only ever had one season of 2 fWAR or above, and he was going to cost $15 million over the next two seasons. At best, we surmised, Towers had overpaid for a bench bat/fourth outfielder. At worst, Kubel was a clear downgrade from Parra defensively, while not promising to be much of an improvement with the bat. Also, he was going to start ALL OF THE GAMES. No one does doom and gloom quite like the Snakepit.

2012 Performance: As expected/feared, Kubel got the majority of starts in left field to start the season. As expected/feared, he didn't start off terribly well. By April 16, Kubel was hitting a cool .200/.310/.240, and Diamondback fans were screaming for Parra. Based on old GDTs, here's an unofficial list of things that Parra would have gotten, had he started in Kubel's place:

But, as strange as it sounds, we were a bit presumptive. Kubel bounced back, putting up some of the best numbers of his life over the next three months. From April 17 until the end of July, Kubel posted a .951 OPS in 366 PAs, smacking 22 HRs and 70 RBIs to go with it. On an offense that could be charitably described as "inconsistent," Kubel was a godsend, and was one of the few parts of the order where fans could feel confident that they would see a solid at-bat. Jim got to post this, crucifying all of us through the mystical lens of hindsight, and everyone was satisfied.

Unfortunately, the season doesn't end when July does. From July 31 on, Kubel hit just .168/.249/.363. And that, combined with already shoddy base running and fielding (per Fangraphs, at least), led to Kubel being worth right around a half win below replacement level during that time. That slash line makes me think that he most likely just had bad luck with balls in play, but having their most consistent hitter utterly disappear down the stretch just drove a few more nails into the coffin of the 2012 season.

But while Kubel was busy putting together a rise and fall to suit a Greek tragic hero, Gerardo Parra quietly had a decent season in the background. To be sure, his OPS+ of 93 was a step back from the 113 figure he posted in 2011, as his walk rate dropped and his K% rose. His defense, while still appearing elite, also seemed less otherworldly than in 2011, as his assist total dropped from 12 to a more-reasonable 8. Still, Fangraphs liked his defense enough that he actually finished ahead of Kubel in fWAR, 2.0 to 1.9, in fewer at-bats. Though of course, the difference is so negligible and the metric so reliant on small sample sizes of defense that it doesn't really tell the whole story here. Parra took a step back, but his role didn't shrink as much as many of us thought it might.

Willie Bloomquist and A.J. Pollock combined for the remaining 24 Plate Appearances in left field, which is nice, I guess. I can't remember (or imagine, for that matter) what circumstances led to Bloomquist getting at-bats in LF, but I'm sure they must have been something.

2013 Expectations: I have a nasty feeling that Kevin Towers was just waiting for this article to go up, so he could undermine it by trading Jason Kubel. Dude's just a jerk like that. Needless to say, no one really knows what to expect, but with the team holding six debatably MLB-caliber outfielders, there's probably another move coming.

If Kubel stays, we can probably expect something fairly similar to last year: above-average bat, below-average everything else. If he gets traded however, we'll see some mad scientist's mix of Parra, Cody Ross, and possibly A.J. Pollock in Left. We may have already seen Parra's best season as a Diamondback, but he's still only 25, and he's just starting to glimpse what should be his natural prime, so another season like 2011 might not be out of the question.

Overall: It wasn't the disaster it looked like in December, nor the glorious vindication it appeared to be in July, but rather somewhere in the middle. The Diamondbacks ranked sixth in the NL in raw OPS from Left Field, and it's hard to complain too much about that result. Kubel and Parra proved to be solidly adequate, and they combined to teach the Snakepit important lessons about the dangers of overreaction on both sides, lessons that went entirely out the window during the Trevor Bauer Extravaganza. B-

Let's see what the rest of the gang thinks:

soco: I think there's a couple different ways you can consider the left field position in 2012. Either you weren't expecting anything, and as such was a great surprise, or you throw out the expectations and judge it in a vacuum. If you choose the former, then there's not a lot of reason to be disappointed. Given how viciously people attacked the Kubel signing when it happened, he turned out to be quite a nice surprise. Parra was a disappointment, even in limited time, though you might make an argument he was hampered by the backup role. Kubel faded a bit down the stretch, but I think overall the position was a solid B.

Clefo: If we were in some alternative universe where Gary Bettman was the commissioner of the MLB and the season ended in July, then this would be a sure A+ for the efforts of Kubel at the plate. His drop-off sort of coincided with most of the D'Backs' fanbase drop-off in caring, so it all worked out. I'm still not sure what to think of Parra and his future with the team, but I'm sure someone in the comments will tell me loudly and with big hand gestures. B-.

Jim: Kinda surprised to see us above average, admittedly not park-adjusted. I could have sworn it was a gurgling vortex of offensive suck in left-field this year. Turns out that was just Parra, and half of Kubel (which probably still has 15-20 lbs on all of Parra). Does make me kinda glad we didn't rely on Parra the entire year, as his overall .727 OPS was definitely a step back. Still, a lot better than Kubel's last couple of months, which were just awful, and hardly any help with regard to selling his services. I actually quite liked the way Gibby mixed and matched the two early on, using Parra as a late-inning defensive replacement, just about every day he wasn't starting. We may see the same with whoever is in left this year. C+