Diamondbacks 2, Padres 8: Over And Rout

Share All sharing options for: Diamondbacks 2, Padres 8: Over And Rout

This game had "meaningless end of the season contest" written all over it. Two sub-.500 teams going up against each other, on an afternoon when most of the country were far more interested in the first weekend of the NFL campaign. And, from a Diamondbacks perspective, I can't blame them. Having managed 35 runs over the last five games in San Francisco and San Diego, the offense barely showed up. While Patrick Corbin kept Arizona within striking distance, the bullpen couldn't. Despite that, the road-trip ended at a respectable 5-5, and the team come back home to Chase for eight more games against the NL West.

After disposing of the Padres on only six pitches in the first frame, Corbin struggled in the second, beginning by leaving a pitch up in the zone to Carlos Quentin, who cranked it down the left-field line. A walk and an RBI double to put men on second and third with no outs, and a run already in. Corbin did allow a sacrifice fly to make it 2-0 to the home team, but recovered to strike out the #8 hitter, then get the pitcher on a ground-out. And he was back to smooth sailing in the third, setting San Diego down in order on 12 pitches. The fourth was even quicker, with a nine-pitch inning, thanks to the Padres not bothering to run on a double-play ball just in front of the plate.

Arizona had stranded runners in scoring position the first two times up, but Adam Eaton scored his sixth run in the third to get us on the board. He doubled with one out, then after a walk to Aaron Hill, the D-backs pulled off a double-steal. That turned Jason Kubel's ground-ball to first into an RBI, though after a walk to Paul Goldschmidt, Justin Upton left two runners aboard. He wasn't the only one struggling against the Padres' starter, as we had piled up six strikeouts through the end of the fourth, and hadn't been able to take advantage of the three walks/. After Eaton's double, the next D-backs to get the ball out of the infield was Chris Johnson, who singled four innings later.

Having picked up his first major league stolen-base, the bottom of the fifth saw Eaton get his first major league assist. He made a fine catch on drive to deep left-center, but then fired a strike all the way back to first-base, nailing the startled runner by a foot or two. The Padres' manager came out to argue, but it was more a token gesture, and the double-play allowed Corbin to get through the first five innings in less than 60 pitches. However, his day was over just one out later. A lead-off homer in the sixth doubled the Padres lead, and a single followed by a walk brought out Gibby. Corbin's line: 5.1 IP, 6 H, 3 BB, 3 K and three runs, all earned.

Matt Albers stranded the two inherited batters in the sixth, but the bottom of the seventh ended the game as a meaningful contest, courtesy of Chase Headley's grand-slam off Takashi Saito. However, all the runs were unearned, because Hill was given an error on a hard ground-ball with a man on first and two outs, which he knocked down, but which also knocked him down. The ball then squirted underneath him, and he couldn't get it over to first quick enough. A walk loaded the bases, and Headley emptied them, with the second slam allowed by AZ this year (Kennedy gave up the first, to the Cardinals' Carlos Beltran). Quentin then added another HR, icing the blowout.

Arizona did get the first two on in the eighth, Eaton running out his second hit of the game on an infield knock, and Hill then walked. However, Kubel and Goldschmidt both struck out, and Upton grounded out. Miguel Montero got his second hit to lead off the ninth, and Chris Johnson (who also had two hits) walked, to put a man in scoring position with no outs there as well. But Arizona completed an empty afternoon with runners in scoring position, going 0-for-10, though Gerardo Parra did drive in our second run with an RBI ground-out. 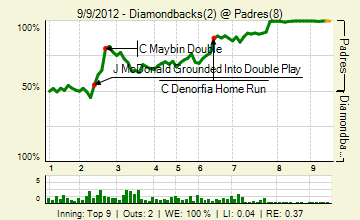 Fewer than 150 comments in the thread this afternoon, which is the lowest number in a very long time. Wasn't just here though - the cinema box-office had its worst weekend since 2001, so its clear a lot of people were finding other things to do. Thanks to those of you who did attend: the SnakePit ladies led the way, in the shapes of hotclaws, Rockkstarr12 and onedotfive. Also taking part (we few, we not-so happy few) were AzDbackfanInDc, Augdogs, txzona, 4 Corners Fan, Jim McLennan, snakecharmer, Clefo, TylerO, dbackforlife and dbacks79. Comment of the day goes to onedotfive, for her plaintive lament about the 2012 campaign.

I almost wish I did