So, going into this one, I think we're playing for the "not getting completely owned by the Padres every single game we play against them" title as opposed to the division title we were fighting for around this time last year. But that's alright. As the team's performance has dropped, so have my expectations, hopes, and dreams. I expect the Padres to not beat up on us, hope we can win, and dream of a season where we didn't lose to San Diego eight times in a row. Let's cap it at seven. Also, don't read the title, because that spoils the outcome of the game, and that's no fun. Hit the jump for the deetz.

I turned on the game at 5:42 PDT -- just seven minutes after the scheduled start, as I had to wrap up a game of StarCraft -- and the Diamondbacks were already up two-nil on the Padres, apparently on a two-run bomb from Jason Kubel. Not a bad start. Adam Eaeton was the other scoring runner on the play, having singled to lead off the inning, his sixth hit in 17 at-bats with the big-league club. He's certainly impressed thus far, and it's nice to see that we have some possible depth in the outfield with the potential departure of someone like Justin Upton.

I did not, however, have the pleasure of missing any of our pitching in the first inning. Much like the game prior, the Padres got things going early, singling twice to open up the game. Wade Miley ran the count up to 3-1 against Chase Headley, but a pop-out helped to avoid disaster... for the moment. Two batters later, Jesus Guzman doubled down the line in left, scoring both runners and knotting the game at two. The Diamondbacks quickly took back the lead in the following inning on hits from Upton and Chris Johnson and a ground out from Jake Elmore, bringing the score to 3-2.

Aaron Hill tacked on another run with a solo shot in the third, his 22nd home run this year. The next batter, Jason Kubel, then did what Jason Kubel does best: absolutely crush a ball into the right-field bleachers, his 29th of the year. Paul Goldschmidt then singled, and two batters later, a Justin Upton single put runners on the corners and knocked Casey Kelly out of the game. Chris Johnson failed to score the runner from third on a flyout, but another Jake Elmore RBI (this time on a single) scored Goldschmidt. Unfortunately, Upton thought he could score. He couldn't. Inning over, but the run meant the game was now 6-2.

Miley allowed a two-run homer in the fourth, and later encountered trouble in the sixth when two of the first three batters singled. Bryan Shaw was called in to replace Miley, and promptly allowed a one-out RBI double to Chris Denorfia. A pop-out and flyout, however, ended the scoring there, with the Padres cutting their deficit to two. [Edit: I somehow deleted a paragraph when copying over, or neglected to mention that Upton homered in the fifth. So, that happened, and it was a bomb.]

From there on, the game stabilized and just one more run crossed home plate (Montero drew a bases-loaded walk in the eighth). JJ Putz was credited for the save, and WE DIDN'T LOSE TO THE PADRES, winning 8-5. Upton ended the night 4-5 with a home run, Adam Eaton had three hits, Kubel had two home runs... it was a good day. Offensively, at least. Wade Miley picked up the win nonetheless, going 5.1 innings while giving up five earned runs. He's now at 15 wins, though it would be hard to say that tonight's outing helped his RotY campaign. 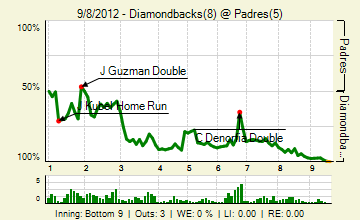 Only 15 'Pitters showed up for tonight's GDT, which pulled in a bit over 350 comments. Snakecharmer and Clefo tied for the most comments at 62. Joining them tonight were sonic barracuda, Jim McLennan, hotclaws, soco, asteroid, onedotfive, Zavada's Moustache, txzona, AzDbackfanInDc, kishi, Rockkstarr12, GuruB, and xmet.

No comments were green, but I think some people get bothered by the fact that Clefo always wins CotD so he wins again with the following:

Those were the days.

Way back in April I think. Man, I was naive back then.

Tomorrow's game's at 1:05, and we have a shot at winning a series against San Diego. Crazy!