I don't normally cover auctions that have ended, so originally wasn't going to do so here. But after some thought, it was just too cool to pass up. How often do you get the chance to buy a World Series game-worn jersey from your favorite team? I even bid on this one myself, but ended up losing out - I couldn't justify going up any higher than the $140.50 plus $11.95 in shipping that it eventually went for. Hey, grocery shopping: it's vastly over-rated...

This is a game-worn jersey given to me by Mark Grace. There are some spots in places, blood stains I believe and dirt, the usual. The jersey has never been washed. I am a die-hard Grace fan and have been fortunate enough to meet him on several occasions. Please see scans of us and some personally signed stuff to me! I have lots of memorabilia, autographs etc. thanks to Gracie, but am willing to part with this jersey because he will always be a Cub to me! The jersey size is a Large.

There is a lot of fauxmabilia present on Ebay, but there are several things about this which give it the apparent ring of truth. Firstly, it's not autographed - that would be the obvious thing to do, if you were trying to fake it. It's just a jersey, albeit one with all the appropriate patches on it [frankly, on that basis, $150 isn't all that expensive - you'd be paying that for a less "authentic" item at the Chase Field team shop. For example, I note this auction, "Mark Grace 2001 World Series Arizona Diamondbacks Authentic Jersey Sz 44", which makes no claim to being game-worn, and is priced at over $220.

The line in the description, "There are some spots in places, blood stains I believe and dirt, the usual," certainly rings true - it is Mark Grace after all. [One dreads to think what "the usual" might be!] There's also the story of how the seller got the jersey:

Mark gave me the jersey pre-game batting practice of game 6. My uncle who lived in Arizona is friends with a guy Rick Berg that came out of the Atlanta Braves organization and is a good friend of Mark's. We got the tix from Mark and all I remember (mainly because I was always so starstruck around him), is him telling someone to get something and then this jersey came flying out from the dugout and he gave it to me. My uncle since passed on and I was lucky enough once again to get his signed and framed one after they won it all, so I am willing to part with this one. Because it was already game 6 and the jersey was dirty etc. I am assuming it was worn at some point, during the series, but at what point I am not really sure.

This is so needlessly convoluted that it has the ring of truth to it, and the pictures accompanying the auction, showing the (apparent) seller and various bits of personalized memorabilia, lend credence to the overall authenticity of the item. Having previously discussed in the section the Daron Sutton bobbleheads, we should equally cover some other Gracemabilia that may be of interest, if you're seeking to honor our other lost broadcaster of the 2012 season...

And my personal favorite, Mark Grace's High School yearbooks. I was surprised to see there's actually five of these currently for sale on Ebay, with prices ranging from $55 to $125 (plus shipping). I guess, if you become famous, then these kind of things tend to come out of people's bottom drawers! Here's his senior year picture. 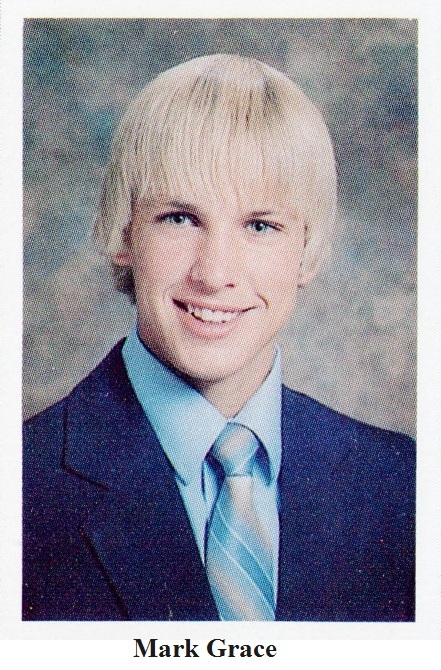