Dbacks 2, Cubs 7: DBacks avoid the wrath of a billion (or so) Cubs fans by not handing them their 100th loss

Today. the Arizona Diamondbacks went for not only a sweep of the Cubs, but also to give them their 100th loss on the season. Josh Collmenter started the game for the Dbacks, and Chris Rusin for the Cubs. It didn't go as planned.

Share All sharing options for: Dbacks 2, Cubs 7: DBacks avoid the wrath of a billion (or so) Cubs fans by not handing them their 100th loss

So, as is usually the case, the road team got to hit in the top the first inning. They also decided to score in the top of the first. Collmenter was not sharp in the first inning. He promptly gave up a lead off double to David DeJesus, and an RBI double to Anthony Rizzo. Starlin Castro also got a single that moved Rizzo to third, but after that, Collmenter shut the inning down by getting Luis Valbuena to fly out to Jason Kubel and end the inning.

You couldn't have been blamed for expecting the Dbacks to fight their way back from a 1-0 deficit against the Cubs, and if you did think that, you would have been right. The Dbacks started the bottom of the first off quite nicely, with A. J. Pollock getting a lead off single. Jack Elmore tried to help, I'm sure, but failed as he flew out to right. Aaron Hill did better. He drew a walk, but Upton grounded into a fields choice. Pollock out at third, two down. Then it got interesting. Kubel was walked to bring up Cody Ransom. Ransom hit a grounder that should have been a fairly easy out, or at least easier than it was made to be. Valbuena, the third base man, came in to bare hand the ball, and just completely missed it. Just ran straight by it! It was great. But it wasn't over yet. Chris Rusin, the starting pitcher, was there to back the play up. He threw the ball to the catcher, Anthony Recker, who let it bounce off his glove. Two runs ended up scoring on what was ruled a hit for Ransom, and an error on Recker to let the second run score.

After that, both teams were rather quiet offensively for the next few innings. The Dbacks got a hit in the second, but that only lead to a string of eleven straight outs. The Cubs did slightly better, getting a hit on three out of the next four innings, but not much else until the sixth. Then the whole game went south.

Bryan Shaw was called into the game to follow up Collmenter's five solid innings. He got it started innocently enough, inducing a ground ball to Hill, but it was all just to set us up for a fall. The next two batters got singles, and then Castro reached on an error by Jacobs. Shaw is pulled for Mike Zagurski, who promptly proves wrong all the dire prediction that I had about the situation by getting a strike out. He's pulled for Alberts who just has to get one out. Well he got the out, but not after he allowed two runs, one on a hit and the other on an RBI hit-by-pitch. Yep. You read that right.

That pretty much was the end of things. It should be mentioned that the Cubs got two more runs after this, one on an error by Ransom in the seventh and then a home run in the ninth. 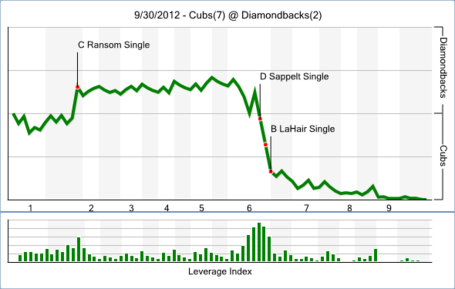 No green comments that I can see, so I'll give COTD to hotclaws for this comment that sums up how we, the fans and the team, seemed to feel about this game:

Tomorrow we start the last series of this long season against the Rockies. If you care to follow the game, it starts at 6:40.