Diamondbacks 8, Cubs 2: 99 Losses and a Four-Pitch Walk Aids One

Trevor Cahill saved his best Chase Field outing for last, tossing his second complete-game for the Diamondbacks this year, and taking a shutout into the ninth inning.. He drove in as many runs as he allowed, and was backed up by plenty of other offense, as the Diamondbacks pounded out 15 hits.

Share All sharing options for: Diamondbacks 8, Cubs 2: 99 Losses and a Four-Pitch Walk Aids One

Trevor Cahill has had his ups and downs this season - and more of the downs have been in Phoenix, with his home ERA coming in to tonight more than two runs higher than the figure on the road. However, he finished on an undeniable up, winning his 13th game of the year and going the distance, allowing only four hits and three walks, while striking out a season-high nine. After a lead-off single in the top of the first, Cahill didn't allow another hit until two outs in the sixth inning.

Okay, it was against the Cubs, whom shutting down should be considered a light thrill. But it's difficult to argue with a performance like Trevor put up on the fourth, carving up arguably the three best hitters in the Chicago line-up - Anthony Rizzo, Alfonso Soriano and Starlin Castro - by striking them out on a total of 11 pitches. He had thrown 106 going into the ninth, but with an eight-run lead, was given the chance to finish it out. He got the first out, but then walked the next man, after getting ahead 0-2. He also was 0-2 on Soriano, but left a pitch over the plate, and it was dispatched just to the left of the batter's eye, breaking up the shutout.

Still, two outs later, and his second complete-game was in the books, following up on the shutout Cahill delivered against the Padres on June 3rd. That, of course, was in PetCo, so this was arguably a more impressive appearance. It is just a shame the mistake in the ninth cost Cahill the complete-game shutout, which would have put a memorable exclamation point on his first season with us. He ends with exactly 200 innings pitched, and the victory will also have brought a smile to the people who bet on Trev before the season, as it means he goes over the Vegas pre-season line of 12.5 wins, as he finishes 4-1 in September, with a 2.62 ERA.

Arizona wasted no time getting on the board. Adam Eaton singled, was bunted to second, and scored on Aaron Hill's 43rd double of the season, tying Hill with Paul Goldschmidt for the team lead. [Goldzilla, incidentally, was out of the line-up for a second straight game, his back still apparently bothering him] A Justin Upton RBI single made it 2-0 to the Diamondbacks, with only one out recorded. After Miguel Montero struck out, singles by Ryan Wheeler and Mike Jacobs brought Upton around to score. There was more of the same in the next frame, as Eaton singled, advanced to second and came home on another Hill hit.

The D-backs added more in the fifth. Hill got his third hit of the night, and Upton followed with his 17th bomb of the season. Fingers crossed the J-Up we've seen in September is the "real" version, and the one we'll get to enjoy next year. However, I perhaps enjoyed the third run even more. The Cubs bullpen walked Cahill. With the bases loaded. On four straight balls. It's only the third time that has happened to our starting pitcher in franchise history. Naturally, one was to Ian Kennedy earlier this year. Remarkably, the other was in 2008, when with the bases loaded, Adam Eaton somehow four-balled a man whose strike-zone is roughly the size of Wyoming, Randy Johnson.

We only managed one run after that, Cahill driving in his second run of the night with a single in the seventh - matching his RBI tally for the first 31 starts of the season. Still, it was an all-round excellent performance, not just by our starting pitcher, but the entire team. Aaron Hill went 3-for-4, raising his season average to .303 and there were multi-hit games for Adam Eaton, Gerardo Parra, Justin Upton, Ryan Wheeler and Mike Jacobs. The 15 hits were the most put up at Chase by the Diamondbacks since June 23 - coincidentally, also a Saturday night game when the Cubs were in town. 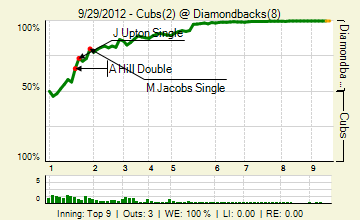 A solid 429 comments - not bad at all, for a meaningless game on the last Saturday night of the season. imstillhungry95 let the way with Clefo and snakecharmer getting there as well. Also to be seen: hotclaws, Dan Strittmatter, Jim McLennan, asteroid, piratedan7, coldblueAZ, Rockkstarr12, BattleMoses, Zavada's Moustache, Diamondhacks, onedotfive, dbacks79, GuruB, AzDbackfanInDc and xmet. There was a tie for Comment of the Night, but hotclaws' "Key to the Game" probably requires more explanation, so we'll go with Clefo's succinct:

It's an afternoon game tomorrow, as we attempt to sweep the Cubs, guarantee ourselves at least a .500 season, inflict loss #100 on them, and make Chicago end the year having gone 0-19 on the road against the NL West. So, plenty to play for...