Paul Goldscmidt drove in five, including a three-run homer, and Josh Collmenter pitched five solid innings, allowing one run, in a spot start, as Arizona betds San Francisco in the series opener.

Share All sharing options for: Diamondbacks 7, Giants 2: The Golden Hour

Welcome to the first ever AZ Snake Pit recap on SB Nation United! I, BattleMoses, will be your humble tour guide as we explore tonight's game. Eaton gonna Eaton and gets a 4 pitch walk to get on base to lead off the game. Aaron Hill and Justin Upton hit back to back singles; Miggy however decides he's too cool for the on-base party and decides to strike out swinging on 4 pitches. Paul Goldschmidt hits a sacrifice fly to score Eaton for his first of many RBI tonight. In the next at, Lincecum throws a wild pitch that scores Aaron Hill.

The fun times end until the top of the third where they start again when Aaron Hill singles and Miguel Montero walks. This walk awakens Goldzilla who lazily saunters to the plate, yawns, hits a home run, and then goes back to the ocean and sleeps until his next at bat. The game settles down once again; until the bottom of the fourth after Marco Scutaro doubles. Buster Posey comes to the plate and grounds a double to left field, which scores Scutaro.

We pick back up in the top of the 5th. Aaron Hill leads off the inning with a Single. Upton and Montero walk. Goldzilla once again comes out of the ocean and walks to the plate. This time he hits a sacrifice fly that scores Aaron Hill before retreating back into the ocean. I should also mention that, that last RBI was Paul's 5th on the night. Upton scores after Dan Runzler throws a wild pitch. There's a lull in the action until the bottom of the 8th inning when Xavier Nady finally decides not to suck for once and hits a single to left. Ryan Theriot then hits a double to score him. After this nothing else happened as the Giants couldn't muster any more offense to claw themselves back into the game. 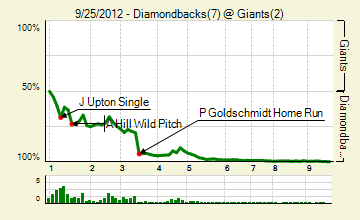 All in all this was a fun game to watch. It's always fun to see Paul Goldschmidt dominate the Giants...