Share All sharing options for: Diamondbacks 2, Rockies 4: And Quiet Go The Bats

There had been a bit of a pattern over the first three games of the series. The Diamondbacks would score first, but the Rockies would then come back and take the lead. However, Arizona would power back, doing a particularly good job of brutalizing the Colorado bullpen, who coming in had given up 24 runs in 16 innings of work. This contest was a little different. The home team got on the board early, then Jason Kubel's 30th home-run of the year gave the visitors the lead. However, the Rockies retook the lead, and we saw one of their starters go more than four innings for the first time this series.

Trailing by one when he left, could the D-backs sweep a four-game series on the road for the first time since 2002? Find out after the jump. Or look at the box-score. Or read the title. Yeah, trying to generate tension in this matter is likely a bit of a stretch...

I was a bit surprised to realize that Trevor Cahill had only two losses in his last ten starts Maybe it's that he hasn't had any game where he been genuinely what you'd call dominating - the last time his Game Score reached 70 was all the way back on June 15. This was another one where the results were perfectly acceptable - you'll take two earned runs over six innings from your starter any time - but the peripherals were a bit less impressive, as Cahill scattered nine hits, tying a season high. though did walk only one, and struck out six. He didn't help himself out with an error in the first, on a pick-off throw after a hit batter that put the runner on third, from where he scored.

That frame might have been worse, except for a beautifully turned double-play, started by birthday boy John McDonald. He also ended the third inning in a similar fashion, but was unable to do much in the fourth, when the first three batters for the Rockies all reached, on a pair of singles around a walk. An RBI groundout and an infield hit then brought two more runs home. That wiped out a slender D-backs lead, which had come in the top half of the inning, with two outs. Paul Goldschmidt walked, and then Kubel uncorked a no-doubter to the right-field bleachers, driving in his 89th and 90th runs of the year.

However, that was a slim picking for an offense which had hit .387 over the first three games (48-for-124), with a .462 OBP, thanks to 18 walks. Tyler Chatwood was clearly a better pitcher than the other Rockies we'd seen, getting up there at anywhere up to 97 mph. The only hits apart from Kubel's home-run that the Diamondbacks managed through the front eight innings were a Miguel Montero single, leading off the second, and a two-out single by Goldschmidt in the sixth. That brought up Kubel with two men aboard, but Colorado went to their bullpen and the left-hander brought it, sent Kubel down swinging.

Justin Upton's ten-game hitting streak came to an end, as he went 0-for-3 with a walk. Two Brad Ziegler streaks also came to an end in the bottom of the eighth. He ended the inning by getting an out on a fly-ball to the outfield - that ended a run of 38 consecutive outs recorded either by the K or on ground-balls. However, worse still was the two-out homer he allowed, giving the Rockies a welcome insurance run. That was the first long-ball Ziegler had allowed in over two years. The last was on June 30, 2010: by my math, he had faced 580 batters in the interim, without a long-ball being given up.

Arizona did make things slightly interesting in the ninth, not quite going down without a fight. Kubel got his second hit of the night with two out, and Ryan Wheeler then hit a ball into the hole that Colorado weren't quite able to get the force on Kubel, because they weren't holding him on. That brought up Johnny Mac, but hopes of candle-laden heroics were dashed, as he flew weakly out to right-field, and the Diamondbacks couldn't quite complete the sweep. It was definitely the offense: the five hits mustered by Arizona tied for the third-lowest allowed by Colorado at Coors this season. When the top three in your order go 0-foe-11 with a walk, it's rarely a good sign... 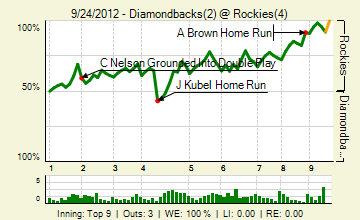 Hotclaws led all commenters, and even she couldn't quite reach 30. Yes, folks: it's clearly the end of a long, disappointing season. Clefo and 'charmer took silver and bronze, while also present were: Rockkstarr12, asteroid, onedotfive, coldblueAZ, piratedan7, Jim McLennan, xmet, Diamondhacks, 4 Corners Fan, MarinerHousewife, and dbacks79. I give Comment of the Night to diamondhacks, simply because it deserves to lie here, without any further comment:

I have been through some terrible things in my life, some of which actually happened. - Mark Twain

If you want an explanation, you'll have to go and look in the Gameday Thread. It's now off to San Francisco for the Diamondbacks, who start a three game-series tomorrow, facing TIm Lincecum. Bet you Goldschmidt is looking forward to that. May tomorrow be a brighter, shinier day, with lots of cool stuff...