Diamondbacks 1, Dodgers 2: Skaggs great, offense not so much

Share All sharing options for: Diamondbacks 1, Dodgers 2: Skaggs great, offense not so much

Delightful! A Saturday game against Los Angeles means I can watch the Diamondbacks from the comforts of the family room and away from the harsh temperatures of my bedroom. This, of course, means I can actually watch the entirety of a game, something that I seldom do nowadays (it would take a superhuman to stay in this room for three hours straight). And it's a Tyler Skaggs start, and one in his own hometown? And we get to face Josh Beckett, a guy that was essentially sent packing to make losing Adrian Gonzalez stomachable (Wiki says it's a word, so it is)? Surely we could end our ten-game streak of scoring less than five runs against a guy riding an ERA over five, even with Kubel sitting. It's gonna be awesome!

Yeah, well, whatever. As is always a legitimate silver lining of a low-scoring affair, our pitching was great. Tyler Skaggs seemed a bit shaky early on; the Two Hundred Sixty-Two Million Dollar Man gave a ball a ride that yielded no more than an out, and another Dodger (it may have been Shane Victorino, I forget to write down the name) narrowly missed a home run, with the ball falling on the wrong side of the foul pole for the Dodgers. Hanley Ramirez was the first to finally make something happen, hitting a solo shot in the second for the first run of the ballgame. It almost appeared to be the ungluing of Skaggs, as Andre Ethier and Luis Cruz delivered consecutive singles to follow Hanley's shot, but the eight and nine hitters could do nothing, stopping the bleeding before it could start. Past the first two innings, Skaggs was great.

Justin Upton was quick to respond to the Ramirez home run in the following inning, crushing a solo home run of his own (from what I can tell, it's tied for the eighth-longest this year by a Diamondback at 447 feet). This came after Aaron Hill singled, but some awful miscommunication (or something -- he was thrown out by a ridiculous margin, so I refuse to believe that anyone could be that poor running the bases) led to an out on the basepaths on a failed steal attempt. So, what could have been 2-1 after the Upton home run was in fact a tie game. I want to say something like "we'll take what we can get", but when you look at the final score...

As I said, Skaggs was on fire tonight. Ignoring the first two innings (because that's how you present stats when making a point that couldn't be made otherwise), Skaggs only allowed two hits on the night and no runs, with the actual total being one run on five hits, with one walk to go along with three strikeouts in five innings. We'll take it. Sadly, Skaggs couldn't pitch every inning tonight. Or anything close to it. He was taken out in favor of Matt Albers in the sixth (after 91 pitches, as noted in the GDT - maybe he could have pitched through the sixth, maybe not, but it's probably best to not risk anything and take it slow). Albers had to face the Kemp, Hanley, and Ethier. What's the worst that could happen? While back-to-back strikeouts to open the inning may have filled me with glee at the time, it was premature and fleeting. Ethier hit LA's second home run of the game, putting them up 2-1 with just three innings of play to go. And, with our offense lately, that's not so bright of a situation. Albers retired Cruz to end the inning, but the damage has most certainly been done.

By the way, if you want a summary of how our offense did, Josh Beckett went 6.2 innings while striking out nine and allowing just one run (the Upton homer). That should suffice as a summary, right? Absolutely nothing was happening offensively, and there were really no points where I felt that we were actually threatening to score. It was just one of those nights. The bullpen (minus Albers) held the Dodgers scoreless for the rest of the evening, which was nice -- it's just unfortunate that such a nice performance against a pretty solid lineup was wasted due to an inability to do anything offensively.

Because it's hard to find anything else to celebrate, both Gerardo Parra and Justin Upton made stellar plays in the eighth to keep the Diamondbacks in the game, and the replays would probably be everywhere had we managed to come back. In the bottom of the eighth, Shane Victorino singled, then stole second, and then moved to third on an errant throw. Adrian Gonzalez blooped one to left, but a fantastic sliding catch by Parra prevented Victorino from scoring. Then, Matt Kemp flied one to Upton in right, and Victorino made the mistake of running on the JUPZOOKA (now written in caps, 'cause it deserves to be): Upton fired it home, and Miggy held on after a collision to record the third out and end the inning.

Oh, and then after that, Brandon League closed the game and we lost. But those plays were pretty cool. 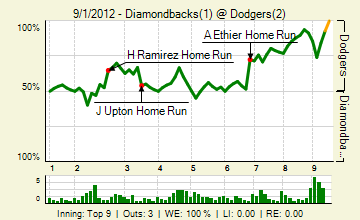 Comment of the Night goes to aricat, who went all liberal-arts-major on the picture posted in the intro to the GDT:

Very clever to use the painting for the game thread intro -

Clearly, the reality of the human figures set against the surreal background in Bume-Jones’ painting is symbolic of the Dbacks fans as they grapple with the reality of their lost playoff hopes against the backdrop of the unreal circumstances of the Dodgers’ spending. And the different reactions of the girls in the painting as they look at their reflections, some admiringly, others indifferently, and still others with concern, is indicative of the complex reactions of different fans as they too look in the mirror and evaluate the season. You’re not saying anything today? Nice try.

I believe it's a 1:00 game tomorrow, so maybe we can try to win the series or something. That'd be cool.