Ian Kennedy continued his late-season resurgence, allowing one run in the first, but nothing the rest of the way, working eight solid innings to pick up his 14th win of the year, over the Padres at Chase Field. In his last four outings, he has gone 3-0, with a 1.98 ERA. Miguel Montero drove in two runs for the Diamondbacks with a pair of doubles, and Arizona picked up their first victory over San Diego at Chase Field this season - the Padres had won seven in a row here, dating back to last year.

Chris Young's return to the line-up proved short-lived. As in, one hitter. The lead-off man for the Padres hit a drive to center, and although CY tracked it down, it appeared that he re-injured his quad, which had kept him out of the starting line-up since September 3. As soon as he turned back, you could see him mouthing the words, "I'm out," and that was indeed the case. Adam Eaton moved over to center, with Gerardo Parra coming in to play left-field. And if you want a depressing thought, have this Tweet from Nick Piecoro:

All told, it was a forgettable top of the first. San Diego loaded the bases with one out, courtesy of a comebacker which Kennedy couldn't handle. A sacrifice fly then gave the Padres an early lead - though Parra's throw beat the man to the plate, Miguel Montero didn't block the plate, and the runner was able to slide in below the tag could be applied. However, Kennedy escaped without further damage, and Montero redeemed himself in the bottom half, doubling home Paul Goldschmidt from first. Goldzilla had tied the game immediately previously, singling to score Adam Eaton, who had walked and stolen second.

It was slow going early on. Through a trio of innings, Ian Kennedy had thrown 63 pitches, finally getting a 1-2-3 inning in the third. However, Eric Stultz had even more, 64 on his side. John McDonald and Eaton reached for the Diamondbacks in the second, but Aaron Hill was unable to drive them in, and Goldschmidt walked in the third, and was stranded on first. Of note in the fourth was a very rare early intentional walk by Kirk Gibson, which put two men on and brought the pitcher up - Kennedy duly delivered, striking out his opposite number on three pitches to protect the lead. We still have a shot at the lowest number since 1974, as documented yesterday.

Kennedy settled down nicely. After a shaky start in the first inning, seemed unlikely he'd be out there for long, but he ended up working eighth innings. Ian needed only 55 pitches over the third through seventh frames, almost the same number as it took him to get through the opening two (49). He ended up scattering seven hits and two walks, with six strikeouts. It was a bit of a surprise to see him come out for the eighth, with his pitch-count already past a hundred, but he struck out two of the three batters faced. At 121 pitches, it was the second longest outing of his career, behind a 122-pitch outing in May. Not sure of the point in a meaningless September contest, to be honest.

The Diamondbacks had extended their lead in the fifth, Miguel Montero adding another two-out double to score the runner from first. He now has 34 RBI with two outs, which leads the team, one ahead of Goldschmidt. The team had a chance to extend the lead further in the seventh as Eaton walked, and Justin Upton singled to put men on the corners with one out. However, Goldzilla hit into a double-play to end the inning. It was Eaton's 10th base on balls in 52 PAs; as a comparison, our main lead-off hitter this year, Willie Bloomquist, has taken 12 walks in 338 PAs. With Young's re-injury, Eaton will likely be playing for the foreseeable future.

Oddly, that's now his 11th game and 41 ABs without an RBI, a streak at the start of your D-backs career surpassed only by Orlando Hudson, who went 12 games and 44 AB [Sean Burroughs did go 23 games, but had only 27 AB in that time]. Eaton's night was also blotted by a two-base error to start the ninth, turning a single into a three-bagger. The run scored on a sacrifice fly, but J.J. Putz picked up his 30th save of the season by closing out the inning without further drama. It's the fifth time a Diamondbacks closer has reached 30 saves, following Gregg Olson (30 in 1998), Byung-Hyun Kim (36, 2002), Jose Valverde (47, 2007) and Putz himself, who notched 45 last season. 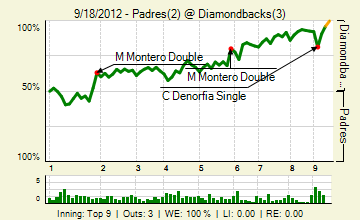 A quiet thread, with the most enthusiasm apparently shown for a grammatical debate and the news Mark Grace could be facing aggravated DUI charges - even though this ended up being a one-run victory, with our starter going eight innings. Yes, folks: it's the end of the season. imstillhungry95 led the way in the comments thread, with aricat and soco tied for second. Or third. Whatever. Also present: xmet, Zavada's Moustache, JoeCB1991, 4 Corners Fan, asteroid, Rockkstarr12, hotclaws, GuruB, justin1985, Jim McLennan, snakecharmer, Clefo, blank_38, John Baragona and PatrickPetersonAZ.

Tempted though I was to go with the discussion of plural possessives for Comment of the Night, let's instead go with hotclaws' comment on Gracegate:

And I love Gracy and wish him well

but drinking and driving is a murder waiting to happen.