"Arizona Diamondbacks not seeing bounce in attendance " So ran the headline in the Republic on Monday. It's certainly true that the team is currently a spot lower than they were last year. But, on the other hand, the underlying number is up about 2,500 per game. If that is continued the rest of the way, it would lead to one of the biggest improvements in team history (trailing only the post-World Series bump in 2002, and the NL West title run in 2007).

So, has that attendance bounced or not? Let's pick apart the numbers, and draw a couple of charts...

Last year, the Arizona Diamondbacks finished 18th in the majors for attendance. After winning their division, and coming within one run of making it to the National League Championship series, there were hopes of a significant increase in turnout at Chase Field. Looking at the rankings, that hasn't happened, the team having dropped to 19th in attendance per game, with 13 contests left. However, the reason for this is as much that two teams who were below us, Washington and Miami, have seen big boosts for one reason (winning their division for the first time in almost 80 years) or another (a shiny new ballpark), and overtaken us, with only San Diego going the other way.

Hopes for any big attendance boost this year were likely over-optimistic. The last time the team won the division title, in 2007, there was an uptick the following season, but it wasn't that much: 2,280 per game. That's pretty close to what we've seen this year, especially as from 2007 to 2008, overall attendance dropped about 1% - this season, total numbers are about 3% higher than last. So, overall, we're very close to being in line with that. Indeed, it's a good deal better than in Milwaukee. Like the D-backs, they won their division, only to seriously under-perform this campaign. However, instead of an increase, the Brewers have seen average crowds drop by more than 2,500.

If you look at the year-on-year change, the Diamondbacks are eighth, and almost all the other teams in the top 13 are still above .500 and in the hunt for playoff spots. The exceptions are the Marlins (An aquarium! Dancing girls! That thing in left-field!) and perhaps surprisingly. the Blue Jays, who have been in last place, 10 games or more back and below .500 since July. Their fans seem finally to have noticed: while averaging 26,465 this year, Toronto's last nine home-games have dropped to a mean attendance of 17,067, including a season-low of 12,935 for yesterday's game against Seattle.

Has the same thing happened to the D-backs? In short, yes. Here's a graph plotting attendance at Chase compared to last year (red line, left-hand axis) and the number of games the team are above or below .500 (blue line, right-hand axis). 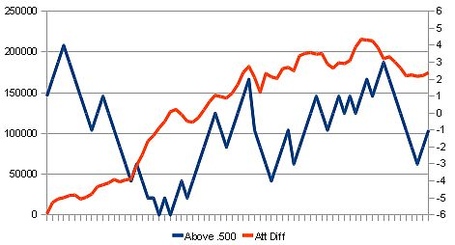 The season certainly started off well, attendance-wise. Through the Cubs series in mid-June, crowds were almost five thousand a game better (4,933), and the team was playing well - a 37-35 record, and just 1.5 games out of a wild-card spot. However, the team faded, and even the boost from a 4th of July sellout (the team was on the road for Independence Day in 2011), couldn't reverse the trend. The improvement on last year peaked on August 12th, after a Sunday game against the Nationals. At that point, the Diamondbacks were 215,799 up on the attendance after 57 home games last year, an improvement of 3,786 per game

But since then, attendance has cratered, with the last dozen home games having been watched by around 40,000 less people than the corresponding contests in 2011. Part of that is, as the Republic article correctly noted, that the likes of the Marlins and Padres are not exactly big draws. But we've seen here on the 'Pit, that interest in the team, as measured anecdotally by GDT participation, site visits and even requests for the SnakePit season tickets, has dropped significantly over the past couple of weeks. I'm just getting a sense that the state has given up on the team for the 2012 season.

The chart below plots per-game improvement over the season, as before, with W-L record in blue, and illustrates the points above. After the initial swings you'd expect from a small number of games, we settled down around the 4-5,000 per game improvement for the first half, but since the All-Star break, the trend has definitely been for the edge to shrink, to the point where it's half what it was in late May. 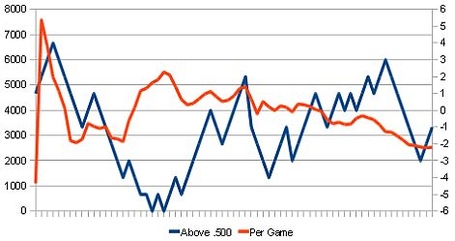 It'll be tough for numbers to keep up down the stretch. The alumni game on Saturday should draw - but that's matched by Game 71 last year, the World Series 10th Anniversary game, which was a sellout. Five of the final eleven games last season pulled in over forty thousand, and the average overall was 35,532. That will be a challenge to match, even if the last home weekend series is against the Cubs, which might help. I can see us conceivably dropping 50-60,000 off that pace the rest of the way, though we should still reach the best figure since the 2008 campaign. However, that'd have to be considered a disappointment, given our early pace.