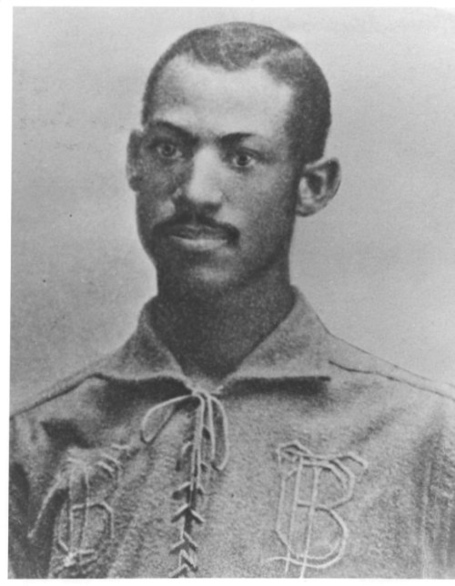 Despite MLB's efforts to rewrite history e.g. articles such as this one, headlined "Baseball was leader in integration." and sub-headed "Success of black players led to other sports' acceptance," the truth is actually a good deal less laudable. For it was almost eighty years after the above amendment was adopted, before Jackie Robinson took the field, beginning the process towards full integration of baseball. For the great bulk of the intervening time, black Americans were barred from the game - not through any actual regulation, but through the most odious of "gentlemen's agreements."

It wasn't always so. While baseball was generally segregated in the 19th century, there was occasional crossing of the color lines. Generally recognized as the first black major league player was catcher Moses Fleetwood Walker, who signed with the Toledo Blue Stockings in 1883. Though at the time, they were a minor league club, that season, he had his first run in with notorious racist (and now, Hall of Famer) Cap Anson, who refused to take the field against Walker - ironically, Walker had been scheduled for a day off anyway. Toledo's manager, Charlie Morton told Anson a forfeit would lose him the gate receipts, and racism succumbed to pecuniary interests.

The incident did not stop the Blue Stockings from joining the American Association the following year, with Walker as one of their starting catchers, hitting .263 Over the next few years, a small but non-zero number of African Americans played pro ball in the minors, such as George Stovey, who had a 1.13 ERA over 31 starts with Jersey City of the Eastern League in 1886, and joined Walker in the Newark Little Giants of the International League the following season. However, in July, the league voted, by a margin of 6-4, to prevent teams from offering any new contracts to colored players. Sadly, Walker ended up advocating a radical, separatist approach, writing in 1908:

The Negro race will be a menace and the source of discontent as long as it remains in large numbers in the United States. The time is growing very near when the whites of the United States must either settle this problem by deportation, or else be willing to accept a reign of terror such as the world has never seen in a civilized country.

For the next sixty years or so, the major leagues were not necessarily all-white as non-black. Players from other races required greater or lesser degrees of subterfuge. In 1901, the Orioles' John McGraw attempted to have black second baseman Charlie Grant play for his team, claiming Grant was an American Indian called Charlie Tokohama. A decade later, the Cincinnati Reds signed light-skinned Cubans Armando Marsans and Rafael Almeida, who had traveled the States as members of the All Cubans team. In Cuba, all pro ball was integrated, and Reds fans has to be assured the players were white, being the sons of Catalan and Portuguese immigrants to Cuba respectively.

However, for the darker skinned, competition was limited to the Negro Leagues. This was not one monolithic institution, but a series of organizations, which rose and fell from the twenties through the forties, most notably the Negro National League, which began with eight teams in 1920. It was disbanded in 1932, but a new league, with the same name, was formed the following year. There was also the Negro American League, which started in 1937, and managed to operate well into the fifties, albeit more as a series of barnstorming teams, rather than a formal league.

While some of the stars of the time did make it to the majors down the road, e.g. Jackie Robinson, Larry Doby, there were others who never had the chance. Josh Gibson, for example, hit .359 with a 1.056 OPS over 13 seasons in the NNL, while Bullet Rogan was as dominant on the mound, posting a record of 76-21 from 1924 through 1928 for the Kansas City Monarchs. That they didn't get to compete against white stars of the era, such as Ruth, Gehrig and Ott in the batter's box, or Lefty Grove, Carl Hubbell and Dazzy Vance on the mound, remains one of the greatest disappointments in the history of the game.

It is fair comment to say baseball was, to a certain extent, a reflection of society. But black sportsmen were an integrated part of American society, going up against their white colleagues, in many other pastimes. Boxers like Jack Johnson and Joe Louis or athletes such as Jesse Owens were nationally renowned, while baseball remained monochromatic. It can't even claim precedent with regard to team sports: the NFL had a number of black players, for instance Fritz Pollard and Bobby Marshall, from its inception in 1920 through to the Great Depression (as well as the likes of Arthur Matsu, the Scottish-Japanese QB for the Dayton Triangles in 1927, who later lived in Prescott).

Part of the reason for baseball's failure to adapt is often ascribed to its first commissioner, Kenesaw Mountain Landis. Club owner Bill Veeck claimed in his 1962 autobiography., Veeck - As In Wreck, that during the early days of World War II, he planned to buy the bankrupt Phillies and rebuild the team with Negro League talent. but that the deal was scuppered by Landis and Ford C. Frick, president of the National League. However, objective backing for this claim from anyone save Veeck, is near-impossible to find. Indeed, in 1942, after Leo Durocher mentioned the alleged gentlemen's agreement, Landis told the press.

Negroes are not barred from organized baseball by the commissioner and never have been in the 21 years I have served. There is no rule in organized baseball prohibiting their participation and never has been to my knowledge. If Durocher, or if any other manager, or all of them, want to sign one, or twenty-five Negro players, it is all right with me. That is the business of the managers and the club owners. The business of the commissioner is to interpret the rules of baseball, and to enforce them.

However, Larry MacPhail of the Brooklyn Dodgers disagreed, saying, "Judge Landis was not speaking for baseball when he said there was no barrier; there has been an unwritten law tantamount to an agreement between major league clubs on the subject of the racial issue." Landis could certainly have acted to facilitate things, but his inaction in this area - compared, say, to his fierce activity when it came to flushing gambling fixes from the game - certainly does him no credit. His successor, Happy Chandler, was a lot more open to the idea, telling journalists, "If a black boy can make it in Okinawa and go to Guadalcanal, he can make it in baseball."

The story of Jackie Robinson, and how he opened the door again for African-Americans to play in the majors is well-known, and has been told by many better equipped to do so. But you shouldn't imagine that things changed overnight, and everything in the garden was rosy thereafter. It took 12 years for the last team, the Red Sox to sign their first black player, Pumpsie Green. That wasn't coincidence, but owner Tom Yawkey, whom Robinson called ''one of the most bigoted guys in baseball'', and manager Pinky Higgins, who reportedly told Al Hirshberg, "They’ll be no niggers on this ballclub as long as I have anything to say about it."

Of course, that was then, and this is now. We enjoy a game comparatively free from racial prejudice, unless you're Milton Bradley - though in his case, I think "being a jackass with anger management issues" is a more important factor in his treatment than the color of his skin. And yet, a study last year suggested that umpires, across all races, are more likely to call strikes for a pitcher of the same color. So maybe there is still work to be done. Certainly, the sixty years where the game willfully segregated itself away from some of the best players, relegating them to second-class citizens - even if society in many ways was little better - can only be considered scandalous.

If you can answer all these questions in the affirmative, and I am certain from my own work that you can, then [this] question can only be answered in the affirmative. Baseball deserves this black eye.
-- Richard Crepeau