Er, Clefo... About that... For Jason Kubel's 27th home-run of the season, leading off the 11th inning, gave the Diamondbacks the edge they needed. J.J. Putz was then renamed "The Uneasy Button" for the night, giving us one of his less impressive performances. But he stranded the tying run at third in the bottom half of the inning, and Arizona took their eighth consecutive game over Los Angeles, including their sixth straight in Dodger Stadium. And after scoring exactly two runs in four consecutive games, it was nice to enjoy an offensive explosion with all of four.

The Diamondbacks got on the board, courtesy of Chris Johnson's first "triple" since joining the team. And I'm using quotes advisedly, since the only explanation for it, is that the Coors Field scorer was on a work-exchange trip to Dodger Stadium. A lazy fly-ball to right field apparently confused some guy who, I've heard, may or may not have gone to ASU, and he fell over, allowing Justin Upton to score from first. Somehow, that sentence doesn't quite justify the magnificent and spectacular level of fail involved. Here: have an animated GIF. We'll be waiting for you below, when you'll finished clutching your sides.

There, that was fun, wasn't it? Arizona then tacked on a couple more runs in the top of the fith, with Trevor Cahill getting the second RBI of his major-league career, singling to center - the hit also got his career average out of two figures, and it ended the night at .106. An Aaron Hill double brought Cahill around to score, and put the D-backs 3-0 up. Meanwhile Trevor Cahill was cruising, with a good-looking sinker that was generating almost nothing but ground balls. Through two outs in the bottom of the fifth inning, there had been exactly one pitch hit in the air, a fly ball off the bat of Adrian Gonzalez, which was safely reeled in by Justin Upton.

Otherwise, it had been a steady stream of infield action, but in what seems to have happened quite often with Cahill, when the wheels came off, they did so quite quickly. It took him five attempts to get that tricky third out in the fifth, though there were a couple of lucky hits involved there. Still, two runs scored, and in the sixth, Cahill walked Matt Kemp with one out, who then stole second rather too easily, and advanced to third on a sacrifice fly to right-field. That was the end of Cahill's night: four hits in 5.2 innings is good, but he walked two and struck a batter, and two of those three free passes came around to score. That included the tying run - courtesy of Mike Zagurski.

Please get another left-hander in the bullpen. Here are some possible names:
Angelina Jolie, Anthony Perkins, Danny Kaye, Jack the Ripper, Leonardo Da Vinci, Robert De Niro.
Yes, I know some of them are dead, and suspect others are not too experienced in baseball. However, they'd all be better options than Mike "White Flag" Zagurski. Really: bringing him in to the most crucial situation of the game, with the tying run on third. No: really... What did you expect would happen?

So instead of Arizona scratching out a one-run win in regulation, we went into extra innings. The D-backs had chances before that, getting their leadoff men aboard in both the eighth and ninth. Indeed, we had the first two aboard in the former, courtesy of an Aaron Hill single and a Jason Kubel walk. However, Paul Goldschmidt K'd, and Justin Upton hit into his second twin-killing of the game to end that one; Chris Johnson also GIDP'd after Miguel Montero led off the ninth with his third hit of the night. However, Brad Ziegler, David Hernandez and Brad Bergesen stopped the Dodgers from the sixth through the ninth.

Indeed, Bergesen went above and beyond, blanking Los Angeles in the tenth, with his second hitless inning. All told, in 18 frames of work, he has a 2.50 ERA and 1.17 WHIP, with 16 hits and 13 strikeouts. I'm kinda wondering why he was waived by the Orioles. That took us to the 11th, and Jason Kubel served up a nicely-chilled slice of crow to Clefo, with line-drive home-run down the right-field line, taking advantage of the low porch down there, in much the same way Chris Young had done on the other side of the field, the night before. The next three went down in order, but it was over to Putz to close things out.

The top of the 11th finished as we pulled out of the parking lot at Washington and Priest. The bottom finished as we sat in the drive at SnakePit Towers, near 91st Avenue and McDowell. If you don't know Phoenix, that won't mean much, but basically, a scoreless inning occupied a 30-minute drive, clear across town. A one-out walk to HanRam really slowed things down, even though Putz fanned Kemp and Ethier around it. Cruz singled with two outs, but with the benefit of a questionable call on a 2-1 count, Putz got Ellis to pop a fly-ball into shallow left with his 26th pitch, tied for his longest appearance this year. Appropriately, Kubel tucked it away for the victory. 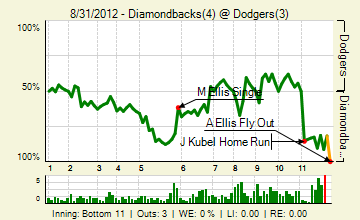 A lightly trafficked thread, which is no real surprise, this being the start of Labor Day weekend. imstillhungry95, Clefo, snakecharmer. Also present: Dan Strittmatter, soco, asteroid, Jim McLennan, 4 Corners Fan, hotclaws, Rockkstarr12, blank_38, TylerO, Zavada's Moustache, rd33, Augdogs, Rcastillo, PatrickPetersonAZ, GuruB and kishi. Didn't have to look far for Comment of the Night, as the prodigal charter Mr. Strittmatter returned from his Salt River Fields sabbatical to regale is with his presence once more. Good to have him back.

Is this thing on?…

We're back at Dodger Stadium tomorrow night, and I don't think anyone would object if the final result was the same once again,.