Share All sharing options for: Diamondbacks Thing Of The Week: Golden Parra Bobbleheads

You might remember, a couple of weeks ago, the Diamondbacks held a week-long scavenger hunt around the state, posting clues on Twitter to bring fans to a secret location. The first eight people to arrive won a limited edition golden Gerardo Parra bobblehead - our outfielder had won the fan vote to decide who'd be honored by being bobbled at SnakePitFest on August 11. Of course, the words "limited edition" and "bobblehead" mean only one thing: Ebay! And so, we find the following auctions currently active...

ONLY GOLDEN BOBBLEHEAD EVER !! 1 of 64 !!!!!!
Gerardo Parra Arizona Diamondbacks

GOLDEN Gerardo Parra Bobblehead **1 of only 65**

It's a side of "fandom" that I'm not entirely comfortable with - selling things given away for free. especially when I see people leaving the park, before the game has even started, with bags full of bobbleheads. Now, I understand that you will sometimes end up with additional items - though if you don't want, use or need the thing in question for yourself, maybe you should consider leaving it for another fan? But even if you don't, there are plenty of fans who weren't at the game in question, who'd likely be delighted to have it. Instead, what you inevitably get are a flood of auctions, say, for the Diamondbacks lucha libre mask, going for as much as thirty-five bucks.

That said, with something super-rare like the Goldenhead Parra, you're moving into different territory, because of the scarcity. Still, the first auction wants $1,500 for it. Admittedly, that's "or any best offer," plus the Phoenix-based seller will drop it off locally for free, and give you a 15% discount for cash, which would take the cost down to $1,275. That still seems ridiculously optimistic, when the second auction wants less than half that, only $550. There does seem some interest, with 21 offers apparently already made on it, but all have been rejected by the seller: be curious to see what range we're talking about.

Similarly, Parra #2 has had 14 offers, but none have yet proven sufficient to tempt the owner into accepting. Though I do like the cheerful pragmatism with which the seller there says, "We were lucky in our quest to "Go For The Gold" but really could use the cash more than the prize." Parra #3 is the only one to see any action, with an opening bid of $250, and still some time left until the auction ends next Thursday (as a bonus, they're throwing in a regular Parra bobbler too). And #4 might have a better chance of turning up in Ebay searches if the seller hadn't misspelled our Gold Glover's first name as "Gerrado", on three separate occasions in the advert.

You'll note that there is a slight discrepancy, in that one auction says "1 of 64" while another says "1 of 65". The latter seems to be true: in addition to the eight bobbleheads given away each day of the eight-day contest, a 65th one apparently accompanied Diamondbacks executives on their tour of Japan, and has become part of the display at the MLB Cafe in Tokyo. It's shown below earlier on the trip, at the Koshien Stadium near Kobe, the home field of the Central League Hanshin Tigers. 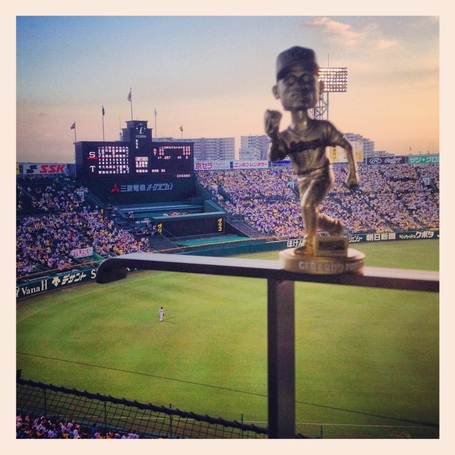 Alternatively, you could pick up a regular Parra bobblehead - say, for $14.99 - plus a tin of gold paint ($7.00), and make your own. It'd be an entertaining craft project for the off-season. Of course, you'd still need to get Gerardo Parra to sign it, but that probably wouldn't be too hard: if you're waving around a golden statuette of a player, you'll probably get his attention sooner or later.