Share All sharing options for: Diamondbacks 4, Phillies 5: A Series Of Unfortunate Events

The Diamondbacks had their chances to come away with the first series victory in Philadelphia for more than five seasons, getting to Cliff Lee early, and with the help of some wind-assisted home-runs. However, after entering the bottom of the eighth inning with a one-run lead, the Arizona bullpen first allowed the home team to tie it, and then let the Phillies walk-off to take the series, Ryan Howard plating the winning run with one out in the ninth. It was the sixth game lost by the D-backs this season where they led going in to the eighth, compared to four all of last year. And the damage for us may be lasting, with both Henry Blanco and David Hernandez getting hurt this afternoon.

Initially, this looked like it might be pretty easy. Trevor Cahill got past the perilous first inning, retiring the Phillies in order, and the D-backs scored three runs in the top of the second, before Cliff Lee was able to retire a batter. Justin Upton singled, Chris Johnson added his third homer in six games since coming to join Arizona, and Stephen Drew followed with his first home-run since before his injury last year, a span covering 144 at-bats. It initially looked like a simply fly-out, but the center-fielder kept drifting back and eventually ran out of room. The Diamondbacks ended with five hits off Lee in the inning, and a 3-0 lead, which explains the green shoots of hope.

However, Lee then settled down, retiring ten in a row, including a total of 25 pitches to get through the third, fourth and fifth innings - less than he needed to struggle through the second. Meanwhile, Cahill went in the other direction, his control wobbling in the second. That resulted in a walk that came round to score on a wild pitch, and an RBI double made the score 3-2 to the Diamondbacks, and brought the Phillies right back into it. Cahill ended up having to strand opposing batters in scoring position in the third and fourth frames to preserve the lead. He then fell behind Chase Utley 2-0 in the fifth, and the game-tying home-run which resulted had an air of inevitability about it.

Effectively, that hit the reset button and made it a new game beginning in the sixth, and the way Lee was pitching, it didn't seem likely. However, Paul Goldschmidt led things off in the restart with another fly-ball that just didn't come down - helped by the 18 mph winds blowing out - for a solo home-run to give the Diamondbacks the lead back. Cahill followed up with his first perfect inning since the opener, and ended the day with another, retiring all eight batters faced after Utley's homer. He ended with a decent line of three runs over seven innings of work, on six hits and two walks, with six strikeouts.

The eighth was where it all fell apart - and after David Hernandez had retired Utley and Ryan Howard very quiety to begin things. The next batter hit the ball to Aaron Hill's left, and though he dived to corral it, he couldn't get a handle on a throw, so it was an infield single. A wild pitch from Hernandez advanced the runner, and then came the crucial play: a liner which pinged off David's calf and bounced towards the first-base line. The pitcher corralled it, but his throw hit the runner and bounced foul. The man previously on base came around third: Goldschmidt's throw home seemed to beat the runner, but he was called safe and Henry Blanco had to leave with an apparently spiked hand

It seemed to rattle Hernandez, who uncorked another wild pitch - after only one in 46.1 innings previously this year, he had a pair while recording two outs this afternoon. Another infield single, which Stephen Drew did well to corral and prevent it turning into an RBI single to the outfield, ended Hernandez's day, with some suggestion that his calf was still bothering him. Takashi Saito came in to replace our set-up man, and got pinch-hitter Jimmy Rollins to pop-out to Drew. But the Phillies had tied the game without getting the ball out of the infield, after the bases were empty with two outs.

Arizona put two on in their half of the ninth, before Gerardo Parra grounded out to end things. Josh Collmenter came in to work the bottom of the ninth, and a lead-off single to Juan Pierre wasn't exactly the best of starts. He was bunted over to second, and then came the other crucial play - a shallow fly-ball to right field was caught by Justin Upton with a slide, but the ball was snowconed in his glove, and popped out when his elbow hit the deck. Instead of two out and a runner on first, there was one down and men on the corners. Chase Utley was walked to load them up, but Ryan Howard dumped a ball into right field in front of Upton for the game-winning hit.

One win out of three is by no means a disaster on the road, and we are still 4-2 on this trip, which I'd have happily settled for at this time last week. But after the opener, I was hoping for more, and it's definitely disappointing. There were some positives to be taken - it was the sixth consecutive quality start out of our rotation on the trip, and Justin Upton had three hits, and seems to be clobbering the ball hit. But on a day when it looks like the Rockies are going to roll over and be the Giants' bitches yet again (contract Colorado!), we'll probably find ourselves back to being four games behind by the end of the day. Not happy. 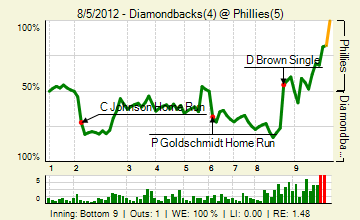 AzDbackfanInDc and $-The Moneyman-$ were the SnakePit equivalent of XXXXXXXXXXXXXX and XXXXXXXXXXX in the 100m [hey, no spoilers here], both cracking three digits, with the bronze a tie between Clefo and soco. Also to be seen this afternoon: Bcawz, Scottyyy, Fangdango, PatrickPetersonAZ, asteroid, hotclaws, Jim McLennan, Rockkstarr12, Jdub220, onedotfive, txzona, xmet, SongBird, 4 Corners Fan, GuruB, mrssoco, Rcastillo, marionette, TucsonPete, dbacks79 and rfffr. Nothing got more than one rec, and I'm inclined to withhold Comment of the Thread, because this game largely failed to amuse me.

Nick Piecoro just Tweeted that the X-rays on Blanco's hand were negative, but he'll likely undergo an MRI tomorrow, as they think there may be some ligament damage. One imagines Konrad Schmidt is on standby for a possible promotion from Reno if a DL stint proves necessary for Blanco.