"No, man, I'm serious. Four in a row. Yeah, I didn't think we had a shot at any of this. But we essentially had a perfect storm happen - the Dodgers swept the first-place Giants, then we swept the second-place Dodgers. No, I'm still not joking. Yeah, heading into this game we're only two games back. Two games! Not even two games back from second-place, but from first place in the NL West! Oh, the Wild Card? We're five and a half back there, but that's besides the point. Focus. So we've won four in a row, and now we get to face the scraps left in Philadelphia. No Shane Victorino, no Joe Blanton, no Hunter Pence. The good times just keep ro-"

"You know... him. He's still on the team, and I think he pitches tonight."

The Diamondback first inning went pretty much the same as any other inning for the Diamondbacks - three up, three down, and a strikeout mixed in there somewhere. When games go poorly offensively, they can generally be recapped by highlighting the lone run or the lone inning that looked like we had a shot. Sadly, the only offensive excitement for the Diamondbacks in this game came in the sixth, and by then, the Phillies already had a 2-0 advantage. Roy Hallday had our number all night, with Stephen Drew standing as the only Dback that didn't seem fazed by the Doc. The "offensive excitement" I spoke of earlier was hardly exciting at all; Drew hit a one-out double off of the wall in left, and advanced to third when Phillies Catcher Erik Kratz failed to stop a ball in the dirt during the at-bat with Jason Kubel. With a man on third and just one out... could we do it?! Could we actually crack the enigma that is Roy Halladay?!

No, not really. Jason Kubel struck out on an inside cutter from Halladay, swinging and missing for the third time in the AB. Past that, as I said, there wasn't much happening in the way of offense. Even when Halladay was removed in the eighth, we squandered an opportunity to score when Gerardo Parra drew a two-out walk and proceeded to get thrown out stealing. In a 2-0 game. In the eighth inning. With two outs. While I see the logic, I fear that it can only be explained by saying something like "well, you see, if he steals second base, then we have a man on second. That's better than a man on first." It struck me as a poor decision, and that's not even due to the result. With how much we struggled to get on base, ending an inning on the basepaths is not a good way to treat our first Halladayless inning, I'm afraid.

Mike Zagurski came in to pitch the eighth, and got tagged for a run after allowing two hits and throwing a wild pitch. Get 'em tiger. Craig Breslow Matt Albers relieved Zagurski, striking out his first batter as a member of the Diamondbacks, then allowed one of Zagurski's runners to score and got a ground out to second to end the inning. With how our offense looked today, I'm not convinced anyone thought that the extra run would be necessary. And, with Papelbon's scoreless ninth (which ended on a Justin Upton backwards K), it wasn't. 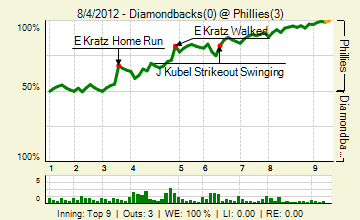 Comment of the Day goes to Moneyman, who said the following after ZM asked "who or what Erik Kratz is" after Kratz homered to give the Phillies a 1-0 lead:

The Kratz is a tempermental mammal

Often prone to flights of fancy and irrational behavior. Well-documented hatred of snakes.

Unfortunately (as far as this series is concerned), the Phillies also held onto Cliff Lee. Who we face tomorrow. It's all good, though. As Clefo pointed out, the guy only has two wins this season. Why be afraid of someone that's not a true winner? 10:35 am start tomorrow.

Oh, and if any of you guys saw the unfinished recap I posted on accident, pretend it never happened.