Share All sharing options for: Diamondbacks 2, Reds 5: Wadeing In Despair

It was Cy Young candidate Johnny Cueto vs. Rookie of the Year candidate Wade Miley at Chase Field on Tuesday night. While both delivered quality starts, Cueto continued his domination of the Diamondbacks. One poor inning undid Miley, who recovered from a three-run second to go seven, but was still charged with the loss as the offense floundered again, extending Arizona's losing streak to five.

The Dbacks start off with a Gerardo Parra double. Hill grounds out to third and Parra stays at second but then a wild pitch is thrown during Kubel's at at and Parra advances to third. Kubel drives Parra in with a sacrifice fly. The Reds answer right back with 3 runs of their own in the top of the second. The key is a 15-pitch at-bat for Scott Rolen, which ends with a walk to put two on with no outs: after the bases are loaded, a wild pitch and a two-run single make it 3-1 to Cincinnati, and the visitors go ahead to stay.

Not much else happens until the bottom of the 5th when Ryan Wheeler singles and John Mcdonald hits into a force out with Wheeler out at second base. Miley comes up to bat and promptly grounds out, but advances the runner. Parra comes up to hit another double, making the score 3-2. The game once again goes into another lull until the top of the 8th inning. Brandon Phillips and Ryan Ludwick hit a couple of singles off new Arizona reliever Matt Lindstrom, then Todd Frazier hits a triple to score both Ludwick and Phillips, putting the score 5-2 for the Reds.

The D-backs tried their hardest i.e. not very, to come back in the next two innings but fail, with Aroldis Chapman picking up another save. 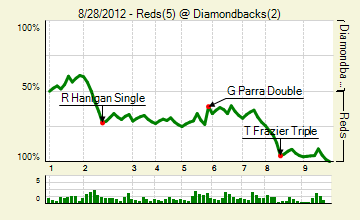 I get the sense GDT enthusiasm is a little on the wane, as we barely struggled past 400, and imstillhungry95 was the only participant to reach 35, falling just short of three digits. Mind you, I think most of his comments were cringing apologies for his breaking the 'Pit. Clefo and asteroid appeared in supporting roles, with others present being: PatrickPetersonAZ, 4 Corners Fan, CaptainCanuck, deerhaven, Rockkstarr12, soco, hotclaws, benhat, piratedan7, GuruB, Zavada's Moustache, Rcastillo, TylerO, Muu, onedotfive, blank_38, Jim McLennan, SongBird, AzDbackfanInDc, USAFIDMT, PR151, Baseballdad, TinySarabia and shoewizard.

One seriously green comment. I'm not certain of the context, as it seems some comments were deleted by the time I got to them, but it could apply to a myriad of things, including possibly the entire Diamondbacks season.

It's more dignified to just shut up.

It's a day game today, so be back at Chase in about three hours for another entry. I'm still debating whether or not to add a countdown until the merciful end of the season.