I got a bit confused during the early innings, as we flicked between the game and Beyond Scared Straight, but I finally got it sorted out. One is about young men, thrown into the lion's den to experience life in the big house, giving them a taste of what their life could be like in future....and the other is Beyond Scared Straight. Tyler Skaggs pitched fairly well, but the offense folded up once again, being held to three runs or less for the sixth time in eight games on the homestand. An error and a home-run off the bat of the opposing pitcher proved the differences tonight, and the Diamondbacks dropped their fourth in a row, running their record in one-run games this year to 10-20.

It was my first time seeing Skaggs pitch, and it was strangely reminiscent of what I saw from Trevor Bauer during his starts earlier this season. The key for both is the ability to throw their secondary pitches for strikes. When that doesn't happen, the opposing hitters can sit and wait for the fastball, and tee off on that. Particularly early, Skaggs struggled with the curve, even hitting a batter with a curve that was particularly Baueresque i.e. maybe made it about 50 feet before bouncing [the camera caught him looking at his hand more than once, suggesting perhaps a grip problem, or maybe a blister?]

Through four innings, the Reds had no shortage of base runners against Skaggs, but fortunately, they went 0-for-9 with runners in scoring position. However, they had still managed to score twice, first with a ringing double to the right-center gap which tied the game up in the third. Then, in the fourth, it seemed that Skaggs had managed to wiggle out of trouble again, coaxing a comebacker into his glove with the bases loaded. However, Paul Goldschmidt clanked the throw over to first off his glove, and the Reds scored their second run. Skaggs settled down, retiring the next six, three by strikeout and was one strike from six very solid innings, facing the Reds pitcher to boot.

However, there's a reason Bronson Arroyo is in the top ten for homers among active pitchers. He took a full count pitch from Skaggs and hooked it fractionally over the fence in left-field. It caromed back into the park as if it had hit the wall, and was originally called a double. However, replay showed it had clearly hit a railing beyond the yellow line, and the umpires saw that when they left the field, changing the decision to a home-run. That was it for Skaggs: instead of one earned run in six innings, it was a still credible two over 5.2 frames (plus the unearned one). He gave up five hits, with still too many free passes (two walks and two HBPs), but kept the team in the game.

The problem was the offense which was... Well, it was Justin Upton. He got us the lead in the second with his 11th home-run of the season, and then tied it up at two in fourth, flipping an outside pitch back into left-field, bringing Aaron Hill home. Credit is due to Jason Kubel there for drawing an 11-pitch walk earlier in the inning, which moved Hill into scoring position]. But the team managed only five hits, with Kubel's one-out double in the sixth the only extra-base hit managed by the Diamondbacks - inevitably, we were stranded. Once the Reds and their league-leading ERA came into the game, it seemed this one was effectively over.

Admittedly, our bullpen did the job we wanted themselves, Brad Ziegler, Bryan Shaw and David Hernandez retiring 10 of 11 batters faced in 3.1 scoreless innings, with one hit, no walks and four strikeouts. But Cincinnati were even better. Kubel's double was the last Arizona base-runner of the game, as our final 11 batters were retired. Some small comfort can be taken from the fact that Kubel, Goldschmidt and Upton all put the ball in play in the ninth against Reds' closer Aroldis Chapman. That's only the fourth time this year, in 59 appearances, that he has failed to strike out at least one batter.

In eight games on this homestand, Arizona have scored an average of less than three runs per game, and their 2-42 record when scoring less than three runs is the least number of wins in the National League. Additionally, the loss drops the Diamondbacks back below .500 for the first time since August 15: I think it's time to revise goals for the season. 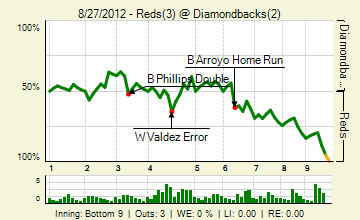 AzDbackfanInDc cruised to another title, with 100 more comments than anyone else. imstillhungry95 was second, with Clefo and hotclaws cracking fifty, and tied in a dead-heat for third. Also present: onedotfive, PatrickPetersonAZ, kishi, blank_38, GuruB, xmet, soco, Fangdango, Rockkstarr12, Circa4life, Medusas_Daughter, DentArthurDent, DivineWolfwood, 4 Corners Fan, asteroid, Husk, Zavada's Moustache, SongBird, txzona, dbacks79, shoewizard and last (and tonight, close to least) Jim McLennan. No green comments, but I didn't have to look far for the comment of the night, onedotfive opening the thread with words to live by for the rest of the season.

Bad baseball is still better than no baseball.

The season will be over soon enough. I’ll try to enjoy every minute of this month or so of games.
It’ll be tough, if the Dbacks aren’t playing well but hey! it’s still baseball!

Same two teams tomorrow night, just with a different left-handed rookie on the mound for Arizona,. as Wade Miley takes on Johnny Cueto. Be fun to see Miley take on the player who's probably his biggest rival for Rookie of the Year, in the Reds' Todd Frazier.