Share All sharing options for: Adios, Bazooka Joe: A Farewell to Joe Saunders

As we noted last month, the trade of Saunders for Dan Haren was much-criticized at the time, but the results which Saunders gave us are entirely comparable with the figures Haren has produced for the Angels, at a much higher cost. And, of course, we are just starting to see the fruits of the other pitchers included by Anaheim with Haren, in the shape of Patrick Corbin and Tyler Skaggs - gifts which look set to keep on giving to Diamondbacks fans for many years to come. But what of Saunders' time in the desert?

It didn't always seem the trade would work out so well for us. Over his first 22 starts for the Diamondbacks, Saunders won only three of them, compared to a dozen losses. Admittedly, as would be a trademark of his recent starts for Arizona, a lack of run support was a contributing factor, as much as any deficiency on Joe's part: [Over his last seven defeats, the offense scored a grand total of seven runs, being shutout entirely three times.] But, over the second half of 2010, while Haren was burning up the American League with a 2.87 ERA, Saunders went 3-7 with a disappointing 4.25 ERA.

2011 started worse still. After his eighth start on May 13, Saunders was 0-5 with a 5.48 ERA, thanks largely to a K:BB ratio of 25:24. But as the Diamondbacks' season blossomed, so did Joe, and he turned it around, going 12-8 with a 3.20 ERA the rest of the way. Particularly impressive were a trio of consecutive road games against our divisional rivals in September, where he won all three contests with a 2.08 ERA. Additionally, he was the starter for the game at Chase later that month, where we clinched the NL West, allowing just a solo home-run against the Giants. It was a typically Saunders-esque good outing: nine hits, but getting the outs when he needed them.

That has been his way. Since 2008, only two pitchers have generated more ground-ball double-plays than Saunders, and his success has been directly related to his "clutchiness". Take last year, for example, where batters hit .267 off Joe with the bases empty, but only .226 with runners in scoring position. When that evaporates. as it has of late this season, then trouble follows. Saunders' post-season debut, in Game 4 of the NLCS, was cut short after seven of the 15 batters he faced reached base, resulting in three runs for the Brewers, and his replacement by a pinch-hitter in the bottom of the third inning.

His contract was up, and it seemed that could be his last start with us, since there was a huge gulf between what the team offered - two years, $12 million - and the "very reasonable" three-year, $27 million contract Joe wanted. Arizona non-tendered the starter, and the arrival of Trever Cahill and Jason Kubel appeared to close the door. It was a surprise when the team announced in January that Saunders would be back, on a one-year deal valued at $6 million. He said, "I'm not hurting (financially) by any stretch, and my family means everything to me. If I can maximize the time in my career during the season to spend with them, it means a lot to them, and it means everything to me."

And the 2012 campaign started incredibly well for Saunders, as he posted a sub-one ERA for the month of April, meriting serious consideration for NL Pitcher of the Month honors (though he received votes, the award went to Stephen Strasburg). But it was tough for him thereafter: his May ERA was north of six, and in mid-June, after he seemed to be getting back on track with a trio of quality starts, Saunders had to go on the DL with a strained left elbow. The second half was a series of more Saunders-esque starts: there were baserunners, often one bad inning, but more often than not, he gave us a quality start at the end of the day.

But what of Joe the person, rather than Saunders the left-handed pitcher? No-one better to answer that question than Rockkstarr12, who has long been Joe's champion on the 'Pit. She was kind enough to share her thoughts about the Saunders she knew:

I discovered Joe Saunders during his time in the Angels' minors. I've been following his career since then and when he came to Arizona via the Dan Haren trade, I was ecstatic, as my wish to meet Joe would finally happen! I learned what a sensitive, caring soul he truly is. l saw him get emotional when talking about on camera what it was like to be leaving Anaheim after coming up with the Angels organization; discussing the tragic death of the pitching prospect he was helping groom, Nick Adenhart, and later on, the awful massacre at his alma mater, Virginia Tech. I thought it was only fitting that Bud Selig allowed Joe to wear his VT hat when pitching his next start after the tragedy.

Joe impressed me right away when I met him. I cheered him on when he'd pitch and even on his worst days, Joe would always give me a smile after the games when I would see him. It was his never-give-up attitude that really stuck with me as well his caring soul mentioned previously. I not only look at what a person contributes on the field but also what they bring off of it. In Joe's case, his love for people and his presence and work in the community via his organization, Team Saundo, struck a major chord with me.

Last season, I put a lot of time, dedication, and hard work into making an appreciation gift for Joe and after the very last game, I presented him with a scrapbook of pictures, articles, and other amazing things that I had saved along the way. When I gave it to him, Joe's eyes filled up with happy tears and he thanked me with a hug and the big, beautiful smile I'd grown so accustomed to seeing each time I got to visit with him before games. He took the time to look at each page and smiled at what he saw, laughing at a few of the pictures I'd added, just enjoying his appreciation present.

Fast-forward to Fan Fest this year...Joe wasn't in the photo session lines so I didn't see him until late in the afternoon and when we saw each other, there was that smile! The picture below is the one we took together at Fan Fest and the best I have with him. This picture always leaves me with a smile and is one of many fond memories I will have with, and of, Joe. I knew his time here was bound to end, and as much as this hurts me to see him go, he knows I will continue to cheer and support him from the desert. He sent me a really special message this morning and I know he will continue to keep in touch when possible. I wish him the very best always and feel blessed that I got to know Joe during his time here. I will really miss him a lot! 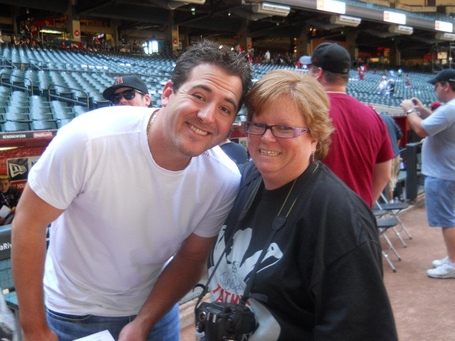 The bottom line is, Joe Saunders started 67 games for the Diamondbacks, threw 424.2 innings and had a 3.95 ERA. That's more than respectable, and I'll finish with a quote from soco, discussing Saunders in August last year.

Of course, the doubters will be quick to blunt any praise of Saunders with any variety of qualifiers. Make no mistake, this is not about Saunders turning into a Cy Young candidate... In the long term, he'll be a #3 or #4 spot pitcher. But people focus too often on aces. They forget that most teams are not constructed like the Phillies where nearly every member of the rotation is a #1 starter. You need a good #3 starter, and Joe Saunders has been one... Maybe he won't keep it up. But today we can take a second to praise him.