Justin Upton did have a birthday to remember, legging out his first inside-the-park home-run, to give Arizona a 2-1 lead in the second inning of tonight's contest. However, it was all downhill from there, the Padres shoving his face into the cake and making off with all the presents. Ian Kennedy allowed three home-runs, tying him on 26 with Joe Blanton for the NL lead this year. there were a pair of bases-loaded walks by D-backs pitchers, and the offense failed to do anything except strand runners in scoring position, going 0-for 6. The net result was our sixth loss in a row to San Diego at Chase - the 0-5 record this year has been by the combined margin of 16-37.

Thanks, Jim, for the intro in my absence. Now I have to recap all of this - however, Jim actually had to sit through all of it, so maybe I shouldn't complain. Hit the jump for details, yo.

Things started off with a bang for San Diego, and continued on a similar note throughout. The third batter of the game, Chase Headley, launched a ball to right to give San Diego an early 1-0 lead. Former-Diamondback and now longtime-Padre Carlos Quentin delivered a solo shot of his own in the fourth, and Yonder Alonso added a third for the Pads in the fifth. Giving up just three earned runs on three home runs through five innings is pretty fortunate, as far as "gave up three home runs" situations go; however, the luck didn't keep up long enough.

The game got out of control the next inning, when the poor pitching caught up to Ian. He walked off Everth Cabrera, and after a sacrifice and a walk, it was two on, none out for San Diego. Then Ian hit Carlos Quentin. Granted, it's better than a three-run home run, but an out would have sufficed. Then, Ian issued a walk to Yasmani Grandal to give the Padres their fourth run. And, for good measure, Yonder Alonso singled, ending Kennedy's night. IPK ended the night with a line of 5.1 IP, 4 H, 6 ER, 4 BB and 6 K to go along with the three homers he gave up. Brutal. His season ERA is now a sparkling 4.44. O Ian of 2011, where art thou?

As mentioned in the intro, Upton legged out his first career inside-the-park grand slam (sorry, Schulte) home run, but the play also accounted for two-thirds of the runs the Diamondbacks scored tonight. And it wasn't a grand slam. It was a two-run home run. With the offense so lackluster and the pitching even worse, it just wasn't Arizona's night. Mike Zagurski and Brad Ziegler combined to allow three hits and two walks (both Ziegler's) in the eighth, giving the Padres three more runs to work with headed into the bottoms of the eighth and ninth. They didn't need it, though, as an Aaron Hill home run was all the Diamondbacks could add (he sure is good, isn't he?). We went down quietly in the ninth, cementing the 9-3 loss. 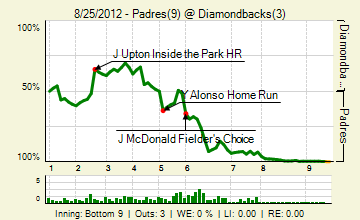 As for Comment of the Night, I went for the first rec'd comment that made me smile. Or, in this case, the first one that made me frown. It needs no context past "this game", and it's perfectly appropriate (for now):

Insanity: Doing the same thing over and over and expecting a different result.

Do not let us get swept by the San Diego Padres.