A Farewell to Stephen Drew

Share All sharing options for: A Farewell to Stephen Drew

Last night's trade of Stephen Drew to the Oakland A's marks the end of an era, with the departure of the longest-tenured player currently with the Diamondbacks. Indeed, in team history, only Luis Gonzalez and Randy Johnson had appeared in more seasons with Arizona than Drew, who was in his seventh year with the club. And yet, Drew was perhaps one of the least-known members of the team: quiet almost to the point of introversion, rarely showing his emotions, on the field or off it.

Drew had been an 11th round pick of the Pirates in 2001, out of high-school, but opted for college instead, and was seen as a possible #1 in the 2004 draft class for the Padres. They were unwilling to pay the hefty bonus Drew, represented then as now by Scott Boras, would command. [They went instead with Matt Bush, so that worked out well...] The signability concerns scared off a number of other teams too: they only had to look as far as Stephen's brother and fellow Boras client J.D. for an example. He had been chosen with the #2 overall choice in 1997, but was unable to reach an agreement with the Phillies, and re-entered the draft, leaving Philadelphia with nothing.

As a result, Stephen dropped all the way to the 15th spot in the first round, where the Diamondbacks snapped him up. However, the concerns proved amply justified, as negotiations dragged on for almost a full year. Drew signed back for college, but withdrew before attending classes, which would have ended the deal. To keep his eye in, Stephen ended up playing for the independent Camden Riversharks in the Atlantic League - alongside another Boras client Jered Weaver. But both men ended up signing, just before the deadline in 2005: Drew got a $4 million bonus, paid over four years, with an additional $2 million in incentives.

He rocketed through the minor leagues with just 140 games played in our system, before being called up. By the start of 2006, he was on the roster of the Triple-A Tucson Sidewinders, and when Craig Counsell hit the DL with a fractured rib just after the All-Star break, it opened the door to the majors for Drew.. Despite qualms about whether his defense would be good enough for him to stick at SS, outside of a rehab stint for a hamstring strain in 2009, Drew has been there permanently, up until his broken ankle last season. He is fourth on the D-backs all-time list for games played, and if it hadn't been for the time lost due to injury, he'd likely be second there, to Gonzalez.

He made his debut against the Brewers on July 15 - it's weird to look at the SnakePit recap for that game, and see how Drew is not mentioned, outside of the headline and one sentence! I suspect any first-round picks making their debut now, might receive a little more scrutiny. He walked and scored there, got his first hit off the Dodgers' Aaron Sele two days later (brother J.D. watching from his position as LA's right fielder), then had his first three-hit game just four days after his debut. By the time Counsell had recovered, his spot as a starter was occupied, Drew batting .316 with an .874 OPS in his rookie season.

However, both those figures turned out to be comfortably career highs: his next best year was 2008, where he hit .291 with an .836 OPS. While it was enough to get him a 9th-place X on someone's MVP ballot that season, the 26th finish in the balloting was the peak of Drew's recognition by the mainstream media. He simply flew under the radar, even as both bWAR and fWAR rate him among the top 10 shortstops in the majors from 2008-2010, and he hit more home-runs over that time than the likes of Jimmy Rollins or Derek Jeter. But I think Drew didn't mind; in fact, he almost appeared actively to avoid the spotlight. 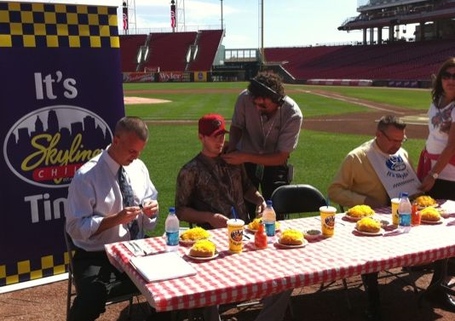 That may perhaps be why Diamondbacks' fans never quite seemed to embrace our shortstop as they have certain other players. Sure, there was the "DROOOOOOOO..." call, rumbling around Chase Field, whenever he came to bat or did something notable. But Drew shirts, for example, seemed a lot rarer than his performance might command, to the point that I recall thinking "Hey, there's a Drew shirt" when I saw someone wearing one. His infrequent interviews were summed up in the Chili With Stephen slot in Cincinnati (above), described by 'charmer as "Everyone's favorite television moment of the century." To quote Daron Sutton - oops, my bad, I mean D___ S___:

"There couldn't have been a bigger show about nothing and it was kind of us mocking ourselves, but not mocking Stephen. It was our way to bring him out of the shadows a little bit, because he has had a hell of a year. [He's not one to say it] and he needs to say it more and with his faith and his core values, he won't offend anybody because he'll do it with respect."

But if the walk-off blast against Trevor Hoffman was the best moment of Drew's career, there can be little discussion about the worst. That was the shocking moment when Drew's ankle did a full 180, as he slid home on July 20 last year. The freak incident not only fractured his ankle, but tore multiple ligaments: it was immediately clear he was done for 2011, but as late as February, Drew was optimistic about being ready for Opening Day this season. When that didn't happen, frustrated owner Ken Kendrick fired off: "Stephen and his representatives are more focused on where Stephen is going to be a year from now than on going out and supporting the team that's paying his salary."

That basically hammered a stake through the heart of any last possibility Drew would remain here after this year. That was already a slim chance: there was a $10 million mutual option for 2013, but Boras clients rarely delay entry into the free-agent market longer than absolutely necessary, and on the Diamondbacks' side, it seemed unlikely the team would be interested in paying an eight-figure sum for a player who was still coming back from such a devastating injury. The move last night got Arizona off the hook for the $1.35 million buyout they'd have had to pay if the option wasn't exercised, as well as the $1.9 million due Drew for the rest of the season.

It's going to be a little bit odd not having Drew at short any longer, though given the year he missed, not as strange as it might have been. It's like losing a very quiet room-mate, who has become part of your life for the past six years, without ever making an enormous impression: he pays his rent impeccably on time, but you rarely see him, and it's probably only after he has gone, that you start to miss him. Still, as noted in the comments last night, he won't exactly be alone as a former Diamondback with the A's, and going to the AL makes it easier to root for him. That's something I'll certainly be doing.