When I swapped recaps with Jim last Saturday, I didn't think too much of it. A good friend of mine left for college today, and he wanted to get together over the weekend before he left to just hang out. Yes, I did have to hand over a recap of a game in which we faced Houston, but it couldn't be that bad. We ended winning that game 12-4 over the Astros.

We ended up losing this one by a larger margin to Miami and even managed to give up 20 hits along the way. Oh, and there was another nine-run inning. Except we were quite clearly on the wrong side of it. Once you're done digesting the Stephen Drew trade news, hit the jump and read the painful details of Joe Saunders' woes. And, I guess, Giancarlo Stanton's tremendous power.

The game actually started off well enough, with Saunders getting through the first unscathed (after Jose Reyes tried to turn a stand-up double into an easy out at third) and Jason Kubel crushing his 25th homer of the year. It continued nicely, too, as Saunders got through the next two innings while only allowing a single hit -- a Carlos Lee single -- and keeping the Marlins scoreless. Then it all sort of unraveled.

Single, single, single. Home run, home run, single. Flyout, pop-out, single. Single, double. Then it seemed that Saunders wasn't up to the task, and Brad Bergesen came in to relieve Joe of his duties. Fittingly enough, the inning ended on yet another, with Carlos Lee trying to stretch a single into a two-bagger (scattered laughter). All told, nine runs crossed the plate in the fourth, all of which were charged to Saunders. The first three singles were the sort that are only really revealed in the BABIP column, as they all just barely evaded the defense. Whether that shook Saunders up or not, who knows, but the three-run bomb from Stanton and the follow-up blast from Justin Ruggiano were certainly enough to rattle him, which may explain why the only outs recorded were to the eighth and ninth hitters in the Miami lineup. Either that or he just pitched terribly. One of the two, though.

What more is there to say after that inning? Maybe this is what it's like trying to tell Astros fans how a game went, but there really was no shot after that. Stanton absolutely destroyed a pitch from Bergesen in the seventh to give the Marlins their eleventh run, and John Buck followed up two batters later with a blast of his own. The Dbacks were able to add a few on a Chris Johnson single in the fourth and a Jason Kubel groundout in the eighth, but the two runs did very little to make the game feel any better. There are a whole lot of stats that you can look at to find the last time a game went as poorly as this one did, but I'm not sure I want to spend my night discovering games worse than this one. Feel free to post them below -- Snakecharmer sent me a few depressing ones, while the broadcast added a few more. Trust me, tonight was ugly.

It might be worth noting that tonight was Stephen Drew's last game donning Sedona Red, as he was shipped off to Oakland after the game. He didn't get to play, though, as Jake Elmore started against the left-handed Mark Buerhle. What a note to leave on, as he now goes on to play for a team tied for the Wild Card lead. Have fun, Droo. 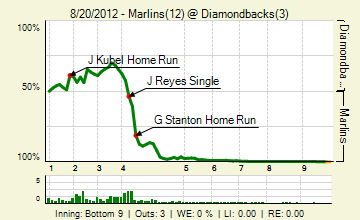 Comment of the Night goes to PatrickPetersonAZ, whose comment brought in six recs. I don't actually know if I'm allowed to post his comment, so I'll just link it here. It was pretty much a perfect comment and gave me a recap title, so you should check it out.

Tomorrow pits Trevor Cahill against Ricky Nolasco. Gracie actually guaranteed that it would be closer ballgame, so you can pile the blame on him if tomorrow goes worse. Assuming, of course, you're still sober at that point. Tomorrow's another 6:40 start, so see you all then.