I tell the barkeep to pour me another. I'm not drinking to forget -- far from it. I'm drinking to remember.

He gives me a bemused look and gets to work on another pomegranate martini. If anything, I'm trying to stockpile enough liquid courage to make it through the massive undertaking that's set up for tomorrow.

If you put your mind to it, you can accomplish anything. And today, history is gonna change.

Okay, first things first. I have to go back to when everything went wrong and try to set things right. It's been almost two months since then, and I think people are starting to forget that I even existed. There's a photo of me and my partner at work from back then, but I'm starting to fade out of the picture. If I don't fix this...

I finish fastening the top button on my suit, grab my keys, and head out the door, scolding myself for letting even a little doubt creep into my head. There can't be any "if"s. I have to succeed.

I lift the driver's side door up on my car, hop in, and start the engine. I've got about 10 minutes before things get started, which should be just enough time. I brace myself as the speedometer rises, knowing what's about to happen...

This was the day after I was told my services were no longer required. I thought it was going to be a short suspension, but "indefinitely" apparently meant something much worse than a few games.

I'm not here to change the past. Doc Brown told me how risky that could be. After all, one seemingly innocent change and the entire cosmos could be realigned. No, I'm here to remind myself of the heartbreak I felt on that day. Catching a glimpse of myself that morning -- broken down, scruffy, drinking milk out of the carton and having the sweet dairy mix with the tears streaming down my face -- will light the fire I need to get back in the game. After staring at myself for almost three hours (my god, he's beautiful), I get back in the car.

Thanks to my updated Grays Sports Almanac, I know the first three innings of the game are a waste of time. The Diamondbacks failed to score on a one-out double by Aaron Hill in the first, and Ian Kennedy worked around a pair of walks in the bottom half to escape without giving up a run. So I skip past that.

The important thing now is to stay sharp. Maybe I'm not broadcasting to hundreds of thousands of fans, but I have to be ready for when the time comes. So I take over in the top of the fourth.

"Aaron Hill crushes a pitch from Armando Galarraga into the left-field seats, and it's gone! His second homer in as many games gives the Diamondbacks a 1-0 lead!"

You hear that? That's emotion. My replacement probably wouldn't know emotion if it hit him in the face. His big, stupid face.

I keep the energy high as Arizona bats around against a pitcher who managed to be both awful and spiteful during his time with us last year. It feels like poetic justice. I'm on top of all the action as Jason Kubel, Paul Goldschmidt and Chris Young all get base hits, driving in a second run. Goldschmidt and Young perform a great double steal, and Stephen Drew and Ryan Wheeler draw a pair of walks to make it 3-0. After a sac fly by Kennedy and a ground-rule double by Gerardo Parra, it's 5-0 and my beloved team has chased Galarraga.

Okay. I've still got it. Hell, I even manage to make sense of this situation:

For those at home who might have been confused, I walk them through how the home run was waived off on review and was ruled a double. Then, Parra uncorked a pretty good throw to catch Martinez tagging up, but the ball hit the runner instead.

The game goes on, but I have other things I need to see to try to understand what the heck happened to me.

I sneak up to the broadcast booth and watch as Mark Grace unloads not one, not two, not three, but four F-bombs live on the air (WARNING: MAJOR NSFW) while working with Thom Brennaman. You know what Grace's punishment was for that? Nothing. No suspension, no fallout, nothing. Sure, he apologized and it was really an audio technicality's fault, but...really? I prefer suits to polo shirts and I'm gone forever?

The whole thing just makes me grit my teeth. I have to get back and call today's game. I won't let them beat me that easily. Still, this is getting pretty heavy.

While I was gone, Kennedy gave up a run on a couple of hits and a walk, but managed to stop the bleeding there. I fix my tie while muttering something about "don't criticize the organization, they said" under my breath, and get back to the action in the top of the seventh.

Hill started things off by drawing a walk and then stealing second. Goldschmidt followed with a base on balls of his own, and both moved up a base on a wild pitch. Montero drove them both in with a little bloop single to center, and although the inning ended without any further damage, it was 7-1 Arizona and it looked like a sweep of the worst team in baseball was inevitable. That feeling was only reinforced after Matt Albers struck out the side in his half and then Hill hit a second homer in an 11-pitch at-bat after falling behind 0-2. And sure enough, it was smooth sailing from there. Even Mike Zagurski couldn't screw it up.

As I'm practicing my play-by-play, I deliver all the action with great feeling and enunciation. After all, I'm a pro. Or at least, that's what the bartender says to me. He's the only one in the bar right now, but I can tell he appreciates my call of the game.

You know what? I used to think that having information about the future can be extremely dangerous. Even if your intentions are good, it can backfire drastically. But now, I figure, what the hell? So I write a letter and take one final trip in the DeLorean to deliver it...

"Dear Mr. Sutton. On one of the nights that I go back in time, you will be fired by management. Please take whatever precautions are necessary to prevent this terrible disaster. Your friend, Daron." 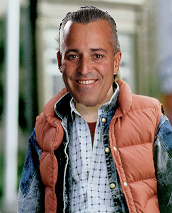 (You'll have to forgive the crudeness of this model. I didn't have time to paint it or build it to scale.) 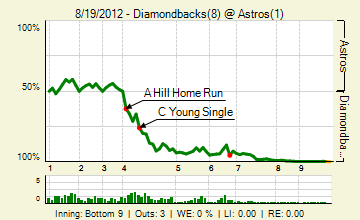 Hill led the way with three hits (and two HRs), a walk, and a stolen base. Goldschmidt added a knock, two BBs and a stolen base of his own. The top six in the order did pretty much all the damage. Meanwhile, Kennedy ended with a solid line (6 IP, 5 H, 1 ER, 7 K), but his five walks helped explain why the game never quite seemed out of reach for the Astros.

Only one comment went green, so it automatically wins CotD:

Two birds but why limit it to one stone?

Bury that sucker in boulders!

So after a three-game sweep, the Diamondbacks hop on a plane for a 10-game homestand that starts tomorrow against the Marlins. Considering how many games the NL West teams play against each other in September, winning three or four from Miami might prove to be really important to Arizona's slim postseason chances.

Anyway, that's it for me for recaps for another year. Don't forget to check out the thread on our potential podcast if you haven't read it or given ideas yet. I'll be giving some more information on it soon.

Oh, one other thing: If you guys ever have kids, and one of them, when he's 8 years old, accidentally sets fire to the living room rug...go easy on him.