Now, I want you know I'm speaking in generalizations here. But in broad terms, it is usually a good sign when your starting pitcher makes back-to-back outs - for instance, the last out of one inning and the first out of the next frame. That's what the Diamondbacks did in the fifth during today's game in Houston, as their first eight men to the plate all reached safely, before Patrick Corbin ended the train ride to Pleasantville with his second consecutive strikeout. But by the time the inning had finished, Arizona had sent 12 up and scored nine times, the most since putting a 13-spot on the Pirates In April 2010.

wailord no doubt deeply regrets his decision to ask for a recap swap. He'll now be covering Monday's game, in which Mark Buehrle will likely no-hit the Diamondbacks. You have fun with that, wailord. :)

The offensive explosion rescued what had been a potentially grumpy Gameday Thread: tacos + 50% in one inning will tend to improve everyone's mood, I suppose. The Diamondbacks had been the first to get on the board, Miguel Montero scoring in the second on back-to-back doubles by himself and Chris Young. But Montero went from hero to derpderpderper the next inning, swinging at the first pitch with the bases loaded, after rd33 specifically ordered him not to. Sheesh. you'd almost think that the players do not get their at-bat instructions by reading our Gameday Threads, or some such nonsense.

What exacerbated the situation was the Astros then immediately tying the game up, their lead-off hitter having the temerity to a) get on base, b) fail to be TOOTBLAN, and c) come around to score. I kinda thought such innovative baseball thinking was forbidden by the rules. Worse was to follow in the fourth inning, when former Diamondbacks catcher Chris Snyder - possessing a .593 OPS coming in to the game - uncorked a two-run homer, giving the Astros their first lead of the series to date. Pretty much brought a halt to the sympathetic murmurings for Snyderman in the thread, however. And then the fifth happened - starting, of all things, with a lead-off double, our bete noir.

How we laughed and laughed and laughed. Particularly impressive to note that we scored nine runs on only five hits, taking advantage of three walks an a Houston error in the inning. After the lead-off double, with Arizona down by two, I was thinking, "Well, hopefully we can pull a bit closer." After all, we've stranded so many of them this season, that scoring Turns out, that was a case of severely lowered expectations as the hits kept coming, capped by Aaron Hill's 15th home-run of the year. Ryan Wheeler and Chris Young also went deep in the later innings, the former getting his first major-league homer and a director's cut extended edition silent treatment in the dugout.

The fortunate recipient of all this support was Patrick Corbin - he had as many runs scored for him in one inning, as the offense has managed during the last four games started by Joe Saunders. That was probably for the best, as Corbin had his struggles, with this being the shakiest outing since he returned to the rotation. Still, he got through seven innings, scattering seven hits and a walk with five strikeouts, and being charged with all four of the Astros' runs. Brad Bergesen did his thing in the eighth. and Mike Zagurski got to enjoy the novel experience of what appearing in a Diamondbacks victory is like, pitching the ninth.

But this was definitely a good day for the offense. Young led the way with four of Arizona's 13 hits - his third such game, and first since October 2009. He also drove in three runs. There were two hits games for Gerardo Parra, Aaron Hill and Justin Upton, but every starting position player got on base safely at least twice, with the exception of Stephen Drew. Between the hits, the seven walks and two batters reaching on errors, we had a total of 22 men aboard, one short of the season high - curiously, last done in another game against the Astros, in which the Diamondbacks scored a dozen, on July 21st. 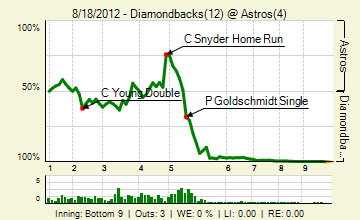 That Fangraph really needs to come with a sign labeled 'Stay back: dangerous drop'. The Astros came in to the top of the fifth, with a 75.3% chance of victory...and left it at 2.5%. Been a while since I've seen that much swing in such an early inning! Over 600 comments, not bad for a Saturday night. imstillhungry95 led, with soco and onedotfive second and third respectively. Also present: asteroid, porty99, hotclaws, Clefo, dbacks79, Jim McLennan, rd33, mrssoco, xmet, kishi, snakecharmer, DivineWolfwood, AzDbackfanInDc, TinySarabia, deerhaven, CaptainCanuck, Rockkstarr12 and Augdogs. Comment of the Day goes to onedotfive: she got what she wanted, eventually!

yep.. I envisioned the Astros on their knees begging for mercy about now

Same teams tomorrow, but an early start: 11:05 in Arizona. There's a very special guest recapper returning for the occasion, so I look foward to that.