Welcome to the latest edition of Dbacks 2012. Will the Dbacks survive the beautiful but torturous Busch Field? Find out after the jump.

Stephen Drew and Aaron Hill start out the game with a quick two outs. Afterwards Jason Kubel hits a ground rule double but the party ends before it can get started when Paul Goldschmidt strikes out to end the top of the first. not much else happens until the bottom of the 4th inning when Allen Craig singles on a ball to center field and then scores on a Matt Holliday homerun to make it 2-0 in favor of the Cardinals. The game slows down again until the bottom of the 6th when Jon Jay blasts a solo homerun to make it 3-0 Cardinals.

The Dbacks start the top of the 7th with a Justin Upton single. Miguel Montero seemingly wills a ball over the fence to make it 3-2 in favor of the Red Birds. Not much else happens until the bottom of the 7th when Skip Schumacher reaches base on a single and Rafael Furcal lays dwn a sac bunt which moves over Schumacher - Furcal is called safe on a throwing error by Ian Kennedy. Shane Robinson grounds into a force out but another throwing error by Kennedy sends Robinson to 2nd and Schumacher home with Furcal at 3rd. Allen Craig grounds out which ends up scoring Furcal from 3rd base. 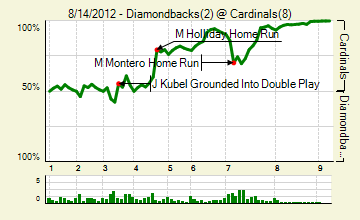 via www.fangraphs.com
ASU: Miguel Montero 9.6%
U Of A: Justin Upton 5.9%
Missouri Department of Education: Ian Kennedy -23.2%

To represent the D Backs 2012 Season

I miss Daron in the booth., If you agree, make this signature your own.